The TP&W name is confusing for a couple of reasons. One reason is that it is the name of two different railroads -- an old, or original, one and a current one. The other reason is that neither actually goes to Toledo. The original railroad was between Keokuk, IA, and either Sheldon or Effner, IL, or Kentland, IN. Then the line continued as Pennsylvania to Logansport, IN. A train could then reach Toledo by using Wabash (now Norfolk Southern) tracks. The portion between Keokuk and Peoria is now owned by the Keokuk Junction Railway. And TP&W now owns the track between Peoria and Logansport. 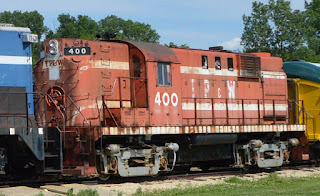 Update: the pictures of a TP&W locomotive are from the Illinois Railway Museum. Their roster indicates it is an Alco RS-11 that was built in 1958 and arrived in 1983. It runs on AAR-B trucks with GE 752 traction motors and is powered by a 12-251B engine rated at 1800 horsepower.

A Flickr photo with four engines and at least 3 liveries.

Posted by Dennis DeBruler at 7:57 PM

Email ThisBlogThis!Share to TwitterShare to FacebookShare to Pinterest
Labels: rrTPaW