Team tracks continued to be important until Interstate Highways were built

I have already discussed the importance of team tracks back in the horse&wagon days. In fact, you could get a feel for the size of a town by the number and length of its team tracks. Many little towns had a short track near the depot called the house track. This was effectively a small team track. Big cities not only had several team tracks in a yard, some railroads had team tracks in more than one yard. For example, C&NW had Kinzie Street and Clinton Street team tracks near the downtown. (Below we will see that C&NW also had team tracks at Proviso.) And some team tracks were dedicated to a particular product and those tracks were shared by all of the Chicago railroads. For example, C&NW had the Potato Yard, IC+Santa Fe had the Chicago Produce Terminal, and Santa Fe had the Grape Yard.

But spotting an overhead gantry crane in an IC railyard near their freight houses taught me that transloading from rail to truck was important for heavy and/or oversized loads until the Interstate Highways were built.


I suspect the tracks in the lower-left corner of this photo are team tracks because the yard did have freight houses further to the left off the photo. If there is a gantry crane, it would be at the end of these tracks off the bottom of the photo. 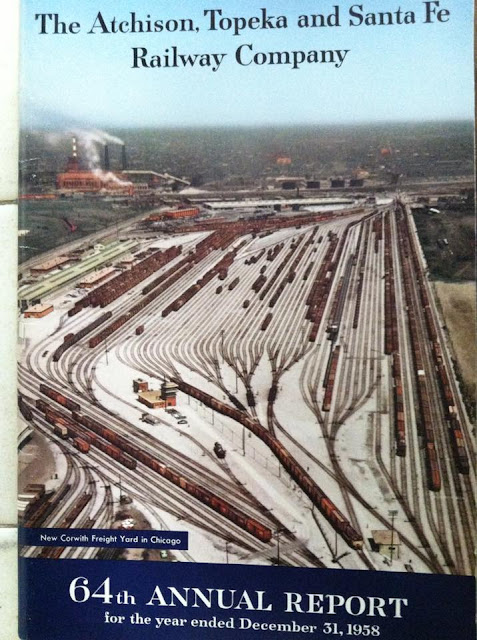 Mike Croy posted
Here is an overview of the "new" Corwith Yard as seen on the cover of the Santa Fe's 64th. annual report.


Team Tracks near Kinzie Street has excerpts from terminal maps that shows C&NW, Milwaukee, and PRR had cranes of 10, 25, and 20 tons, respectively.

CB&Q had two gantry cranes, one on each end of their Western Avenue Yard.

I looked at my notes for the CP/Milwaukee Bensenville yard, but the aerial photos were of just the hump yard or of the wrong time period.
Posted by Dennis DeBruler at 6:43 PM