MoW: Sidebooms or sidewinder (a dozer with a boom and a counterweight)

Sidebooms or sidewinders are dozers with a boom hinged on the left side and a counterweight hinged on the right side. Also, a hoist works is mounted on the counterweight side. They were developed to help lay oil pipelines. But they have proven to be useful in handling freight cars and locomotives. Especially for cleaning up derailments.
I tried finding info on sidebooms on Cat's web site, but it was broke. So I found this image.
Before the invention of the sideboom.

At 0:25 we see some sidebooms comingdown a road. Each is carrying a diesel wheelset to be loaded on the truck we see in the left foreground. In a couple of seconds, we will see the counterweight being lowered in anticipation of lowering the boom. But I have no idea why they lowered the boom before they got around the power pole. Especially since they raised it before they got to the truck. At 2:23 you can see the traction motor that is attached to the wheelset. The traction motor is what makes this a heavy load. Lowering the counterweight when the boom is lowered not only keeps the center of gravity between the dozer's tracks, it lowers the center of gravity for improved stability.

Hulcher is a contractor that has developed the sideboom as a tool for cleaning up derailments.
Hulcher also uses them for non-emergency tasks such as placing heavy loads on flat cars.
I had to search the web a bit to find photos that included the counterweight.
Not all track work is emergency repairs. Here they are doing a #20 switch scheduled replacement. Rail is remarkably flexible. You can't lift it in just a couple of places with cranes. Sidebooms provide an economical solution to providing several lift points and to providing mobility.
An 8-axle mobile crane is a big hydro-crane, but they are using the rear winch on several dozers instead to raise the locomotive. Is the crane going to be used when the rear of the locomotive is at the top of the cliff to raise the cab end over the concrete retaining wall?
Sidebooms have proven so efficient for cleaning up train wrecks that the "Big Hook"' (heavy tonnage rail crane) has become obsolete. They are now found only in museums. But the smaller rail cranes are still used for maintenance-of-way projects.


But sometimes they call in their cranes.


Lisa Catera posted three photos of a derailment with the comment: "This morning [6/6/2019] in Taylor TX."
James Patterson Sidewinders
George Dubbs Yep called sidewinders four can get hold on each corner of the biggest locomotive or loaded freight car And carry it to good track and put it back on track....used them many times,time savers verses old wrecking cranes.....


Kevin Flynn posted six photos with the comment: "Four loaded tanks last winter in Lemont. Hulcher Professional Services getting it done!"
Kevin Flynn Tom Klimczak , Hulcher can set up 2 booms in under 30 minutes.
David Koziol Ken Schmidt when I was having a talk with Glen Hulcher in Denton a few years back he told me that he was in the business of moving men and machines.
Ken Schmidt David Koziol They sure are. One morning while I was getting coffee, I saw a parade of trucks on US 65, lights flashing.
You didn't need much prompting as to what happened, all one had to do was follow the leader and find out where.

Tyler Glass posted two photos with the comment: "This is what happens when industry doesn’t listen to the person who inspected the track and doesn’t let them fix it."
Keith Todd You know its bad when the sidewinders show up.
Trestin Minefee Good ole side booms!
Thaine Brown What the hell are those critters?
Don Whatley Thaine Brown D9 Cat bulldozers with side booms.


Rick Durrant posted five photos with the comment: "When the spreader derails on Donner 2011."

There were no injuries. One report called it a sand train. But some of the hoppers are too long for sand. And at 0:08 the yellow bulk-head flat car looks like it is carrying lumber.
(new window) In addition to sidebooms, the other goto "clean up tool" is an excavator with a "thumb."


The comments on this share as well as the video below indicates this rerailer can be used for locomotives as well. It seems much cheaper and faster than swinging a locomotive from a couple of hooks. Unless UP 9714 above ended up with the wheels some distance from the tracks.
Terry Dabbs We used to do that with wood blocks. Re-rail em and get back to work. Now-a-days, you drop 1 wheel on the ground and you’ll see 5 semi’s with heavy equipment heading towards it.
Andy Peters

Re-rail frogs are still used, not a image of by gone days.

(new window)  The action starts at 1:38.  Note there is one "white hat" for each sideboom operator giving the signals.  At 15:04, they shutdown and move the sidebooms to the rear of the car and just pull the front truck through the dirt. They steered the front trunk by changing were they pull on it. At 23:21 you can see gravel on top of the springs of the truck. So the truck got buried pretty deep to stop the locomotive's first pull. The buried truck is why they moved the sidebooms to the back of the car and allowed the front truck to plow dirt. Would four sidebooms fit? That is, one at each corner.


(new window)  Facebook no longer saves a link to the post. I remember one of the comments wondered about why did they lift it so high to replace the truck? They must have been planning to do something other than truck replacement because I think they would have left the truck on the tracks if it was being replaced. I notice that the guys on the right side had enough sense to step back as they noticed the lift was getting rather unstable. Note that the "white hat" decided to look to his left just as the two blocks on the left touched each other and broke the cable.
Update: 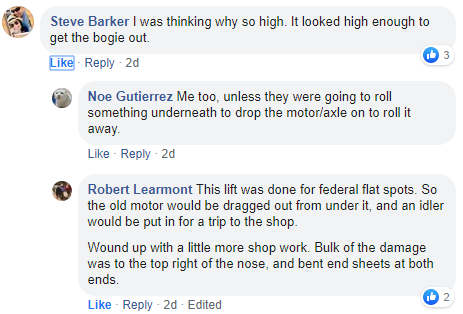 River Rail Photo has an album of four photos showing several sidebooms rerailing tank cars. "All of the cars rolled away on their own wheels."

More examples of CSX and other railroads keeping sidebooms busy

A YouTube video starting with failure of re-railer and then the sideboom action. What are they torching? Did they have to weld on lift brackets? The start of the lift
Mike Kaluhiokalani Jr. shared
John Sohn I was one of the guys who worked that job and I have to say great camera work.
Dylan Miles Haha i remember this! I look like a baby.

I saw several posts concerning this derailment. Here are a couple for some context: overview and details. My motivation for noting the derailment is this video. In particualr, I was surprised, starting at 0:29, how they move one end of the locomotive sideways by tipping a sideboom over.
(Update: I add this one because many of the comments are probably by railroad employees. Towards the end, this one has some drone shots. Some of those shots show how much rock they hauled in to reduce the slope of the embankment. 40 photos)
(new window) Drone footage of the above Buffalo & Pittsburgh derailment in East Aurora, NY.


A video of two of them putting a derailed NS locomotive back on the tracks
Seven photos of four sidebooms carrying a locomotive down a street to the Colorado Railroad Museum.

Posted by Dennis DeBruler at 11:29 PM