First hydrocrane was launched in 1947

Truck-mounted, hydraulic-powered cranes have proven so popular that they have evolved into mobile cranes with custom designed truck chassis. And they have become big. I have been collecting photos of mobile cranes for a while now. The largest has nine axles. I've also found several photos of them in action with their boom extended.

And I have documented some of them doing jobs in Downers Grove:
These mobile cranes are very versatile, and I've caught them at several more construction projects around town. Maybe this list of mobile cranes in action will motivate me to document additional projects and add them to the list.

I have collected photos of a lot of cable driven cranes in my notes on hydraulic cylinders to illustrate the technology that was used before hydraulic power was developed. The cable technology used clutches and brakes operated by levers and pedals. Operating a "friction" crane was hard work. I remember driving cars that did not have power brakes or steering. You needed more muscle power to stop. Steering wasn't too bad unless you were moving slow such as parallel parking the car. And, unlike today's cars, you could not turn the steering wheel unless the car was at least creeping along.

It should not be a surprise to a student of technology that the break-through technology of a hydrocrane was developed by a hydraulic manufacturer instead of a crane manufacturer.


In the early 1940s, Roy O. Billings, president of the Milwaukee Hydraulics Corp., saw the need for a small mobile crane that would be safer, easier to operate, and lower-priced than the heavy friction-operated cranes of the day. With more reliable, higher-pressure hydraulic systems coming on the scene, he decided to apply this new technology to his concept. He designed and built a truck-mounted hydraulic crane with a telescopic boom and hydraulically operated outriggers. He named it the Hydrocrane and launched the first model—the H-2—in 1946, as one of America's first-ever hydraulic cranes. It was a simple and highly mobile machine that became an instant success, and by the end of the following year, he had sold some 200 of them. [ConstructionEquipment]

I was surprised to learn that Bucyrus-Erie noticed the success of the H-2 and bought the company. When I think of B-E, I think of big mining equipment, not mobile cranes. For mobile cranes, I think of other companies such as Grove and Terex.

B-E purchased the Milwaukee Hydraulics Corp. in 1948 and further developed the Hydrocrane concept into larger machines. In 1951, B-E replaced the H-2 with the more ruggedly constructed and heavier H-3 three-ton machine. The H-3 not only retained the mobility of the earlier machine, but could also operate as a truck-mounted backhoe known as a Hydrohoe. A larger Hydrocrane, the nine-ton H-5, and half-yard-Hydrohoe, appeared in 1955. [ConstructionEquipment]

I noticed that Roy's first design included the concepts that are fundamental to all mobile cranes: a telescopic boom and outriggers.

Because of the comment on the post below, I didn't think this crane had outriggers. But looking closer, it has outriggers on the rear and behind the cab. They just aren't using them.
Modern mobile cranes will always set their outriggers. They won't travel with a load. If you need to walk a load, then you need to bring in a crawler crane.
Two days after writing those sentences, I came across this post. Note the outriggers have rollers!

Another example I saw recently of the friction truck cranes that Roy's design made obsolete.

As serendipity would have it, the day I was writing these notes a truck with a crane was unloading gypsum board at a nearby construction site. So I took a video of the ease of controlling outriggers when you have hydraulic power.

But I'm going to keep the stills I had already written of the hydro-crane retracting its outriggers. In this case, the bottom of the jack is a fairly big steel pad. The truck driver (in the orange shirt) is unpinning the pad from is centered location and repinning it at one side so that it doesn't project beyond the side of the truck when the outrigger is retracted. 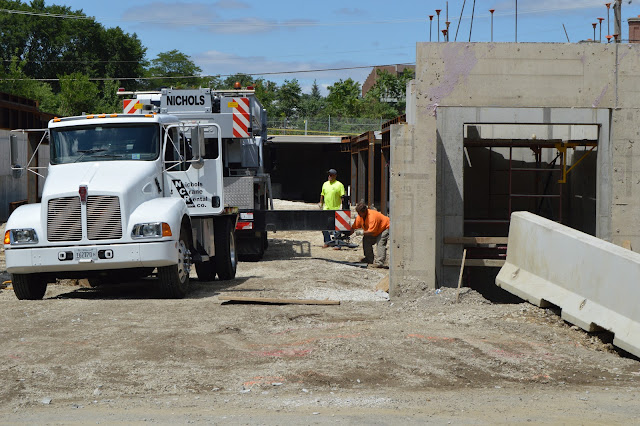 The controls for the outriggers are on the side of the truck. The crane operator is pulling in the outrigger as the truck driver carries the mat that was under the steel pad back to its storage location. 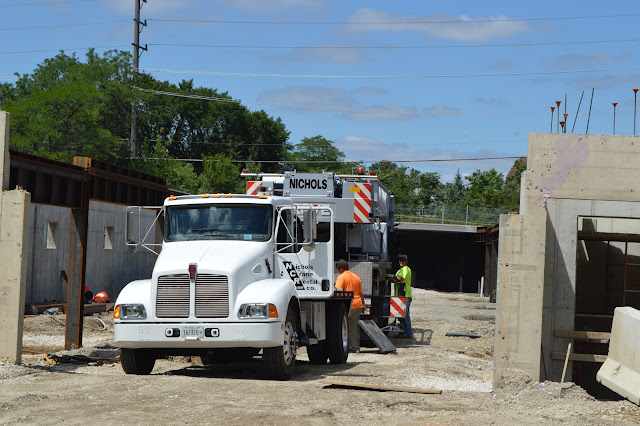 The crane operator also does some of the heavy lifting. 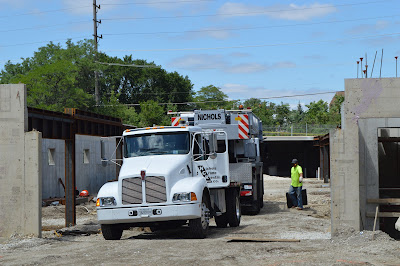 The truck driver heads back to their yard with the weights. 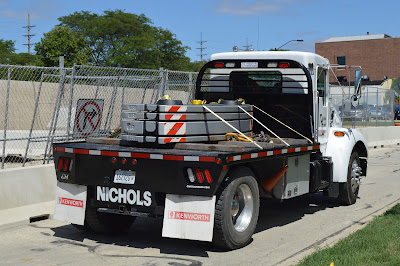 As we saw in the older photos, mobile cranes used to be built on a regular truck chassis. Now they are built on a purpose built chassis. One of the custom design features of the chassis is different steering modes. Since I have the photos handy, I'm going to illustrate that feature.

I begin with an overview of the crane as it is backed out of the site. 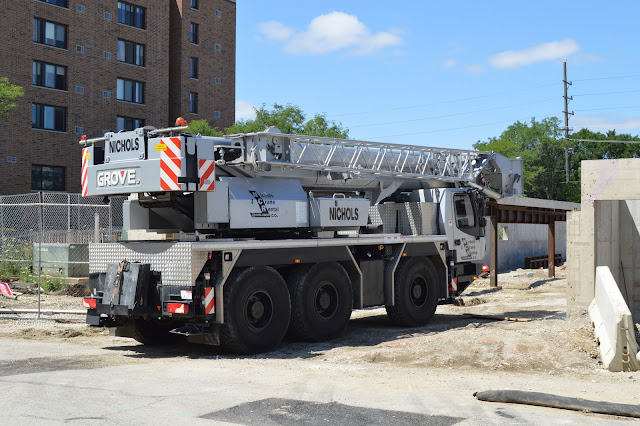 Note in these next two views, that the rear wheels turn opposite of the front wheels. This allows it to make tighter turns than a truck's normal front-wheel steer design. 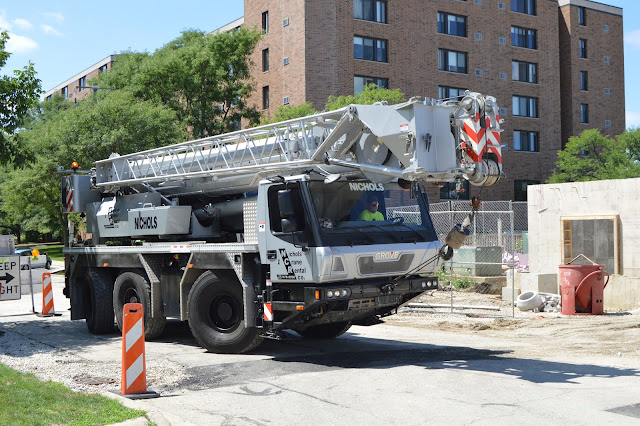 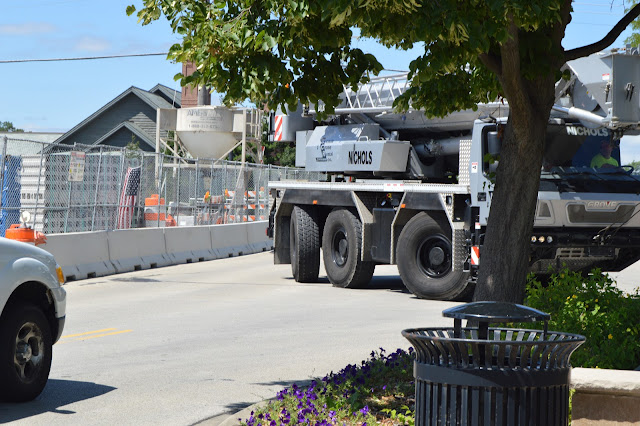 I posted a question to a group that I know has a lot of professional crane operators as to the correct term for the above steering mode. It was interesting how many terms I got: round, circle, opposite, counter, coordinated, cramp, tram, rear-wheel, site, crab, and oblique. It turns out oblique is another term for crab steering, and that is a third mode where all the wheels turn in the same direction by the same amount. [Lull] I'm going to use the term "round steering mode."

A video of 6-axle round steering

The truck-like mode is called front-wheel steer or highway mode. 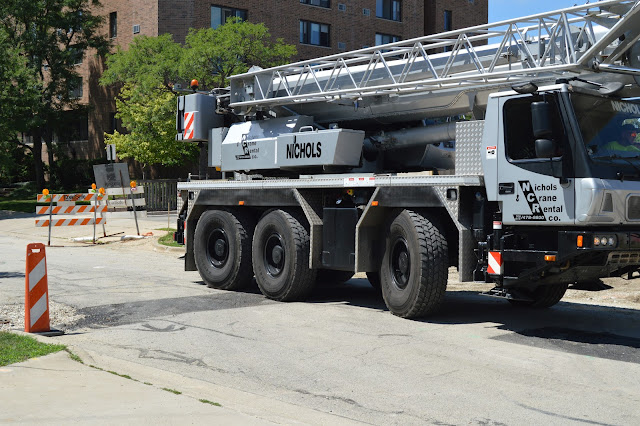 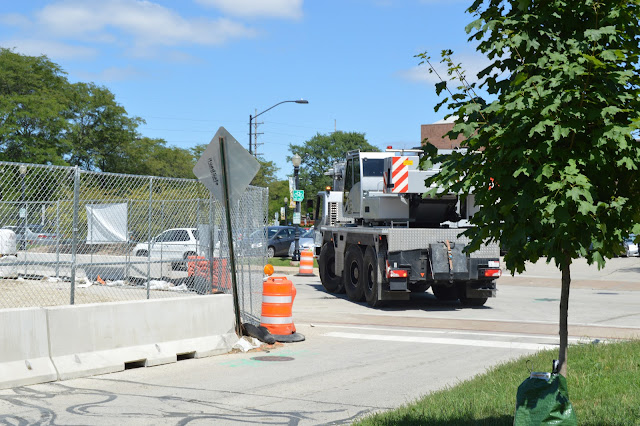 Posted by Dennis DeBruler at 11:41 PM