1886 Blast Furnace and Some Videos

So far, I have avoided the iron and steel industries because I'm still so far behind on other industries. But I came across a diagram of an 1886 Blast Furnace in the CB&Q archives of the Newberry Library that records that blast furnaces where 80 feet tall in 1886. It also records some Newberry links for future reference. The diagram is from a report on steel rails.
I don't have notes on the entire steel making process, so I'm parking this idaillinois flow lines diagram here for now. And a picture story of steel
North Chicago 1885 #1-4 blast furnaces I think this was the precursor to Illinois Steel that was on Goose Island.
And these notes record general information on how a blast furnace works.
10:21 video  Open Hearth era
18:06 video  BOP, EAF and continuous casting era

Angelo Tessaro posted three diagrams showing the evolution of the blast furnaces at a plant in Belgium. A tonne is a metric ton, so that is 1000kg. The improved efficiency of coke consumption would be one reason why they kept making them bigger. 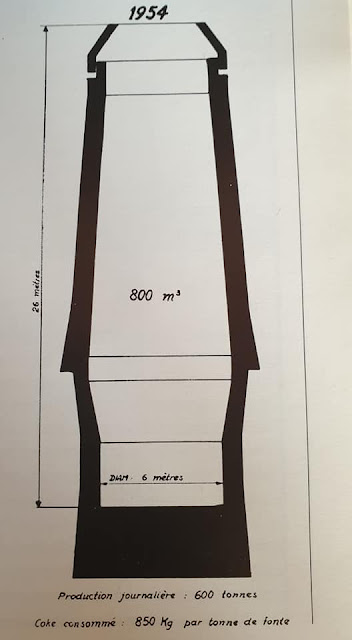 Interesting comments about dumping the iron during a strike because of the difficulty of properly shutting down a blast furnace
Richard Allison provided a summary of the big blast furnaces built in the US as a comment on a post.

My logic is that ET has continued being inland and profitable as per USS but sending ore a little further to the Bethlehem plants is not much further. Sparrow's Point is a catastrophe in which was not a lost cause but it was bled dry. Ore could have been gotten from Brazil and ore could have also come from Nova Scotia or the Great Lakes. I stood on the casthouse of L Furnace when it was built and was in awe of the magnitude of this furnace. I wish I still had my helmet sticker there but never I thought it would have disappeared in only 30 years. I never made it to Madline No.7 at now CC but did go to the former USS Gary 13 and now 14 and the USS Fairfield No. 8, the most modern furnaces in the US and L Furnace and No.8 did not survive even though all built in the late 1970s. Old furnaces seemed still go on with 120 or so blast furnaces in the 1980s to around 16 or 17 running today. I guess finances do not always follow logic in the steel industry today or in the past.

I need to do more research to find where these blast furnaces existed.
Posted by Dennis DeBruler at 7:53 PM