Since many of the pictures I have taken recently have power lines in them, it occurred to me that electricity is an important part of our industrial heritage. So I'm going to investigate ComEd's north-south corridor in the far western suburbs.
(Update: I traced the power lines even further.
A video about how power lines are made
A video about the development of power transmission
Some Chicagoland power lines of notes)

The northernmost view we have seen is east of Hidden Lake.

Going south, we next see the lines join the I-355 corridor just west of Finley Road. (The "rod" in the foreground is the radio antennae of the van.) 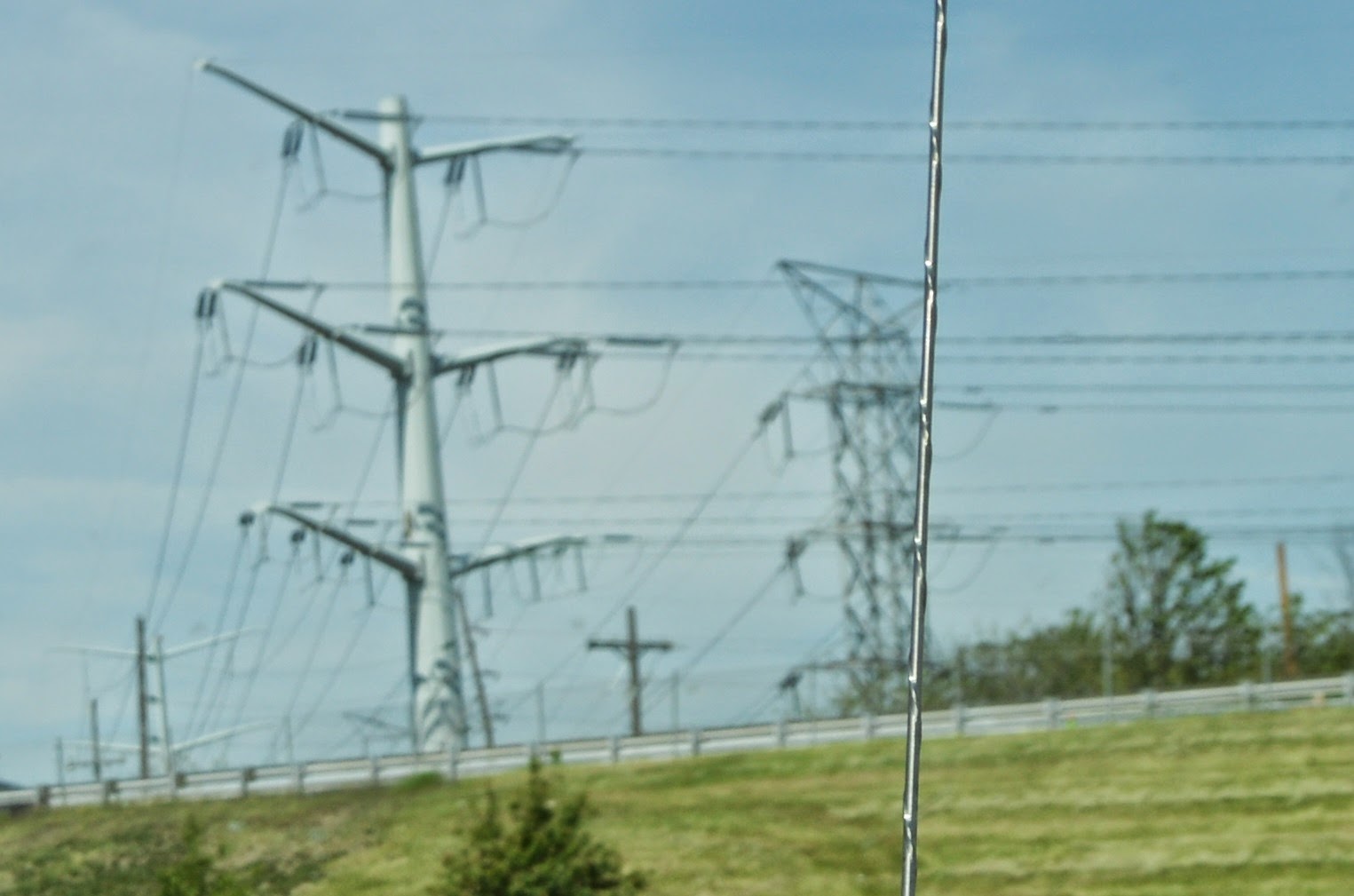 All high-power electrical applications use 3 phase circuits, which means each circuit uses 3 conductors. Each conductor carries an alternating current that is 120 degrees out of phase with the other two conductors.
An advantage of a 3-phase circuit is that the sum of the the phases is always zero. This means a fourth conductor is not needed for the return current. It also means that the power delivered to the load, e.g. a motor, is constant. Furthermore, in a motor the currents create a magnetic field that smoothly rotates at 3600 rpm. The development of the squirrel cage induction motor in the 1890s is one of the reasons AC won the War of Currents.
A 25:56 video on the history of poly-phase electric distribution  At 23:37 she introduces Charles Steinmetz. But I guess I have to wait until she releases the Steinmetz video because I could not find it. (Update: found the 28:12 video on Steinmetz. I have more on Steinmetz in Starting Synchronous Electric Motors.)

The lines follow I-355 to south of Ogden where all but the two extra high voltage circuits on the tubular towers terminate in a switching yard.

You can see just a little of the switching equipment in the lower-right corner of this view.

My attempts to get a picture of the switch yard from I-355 failed because the southbound entrance ramp from Ogden was in the way. But I did get a good closeup of each type of tower. 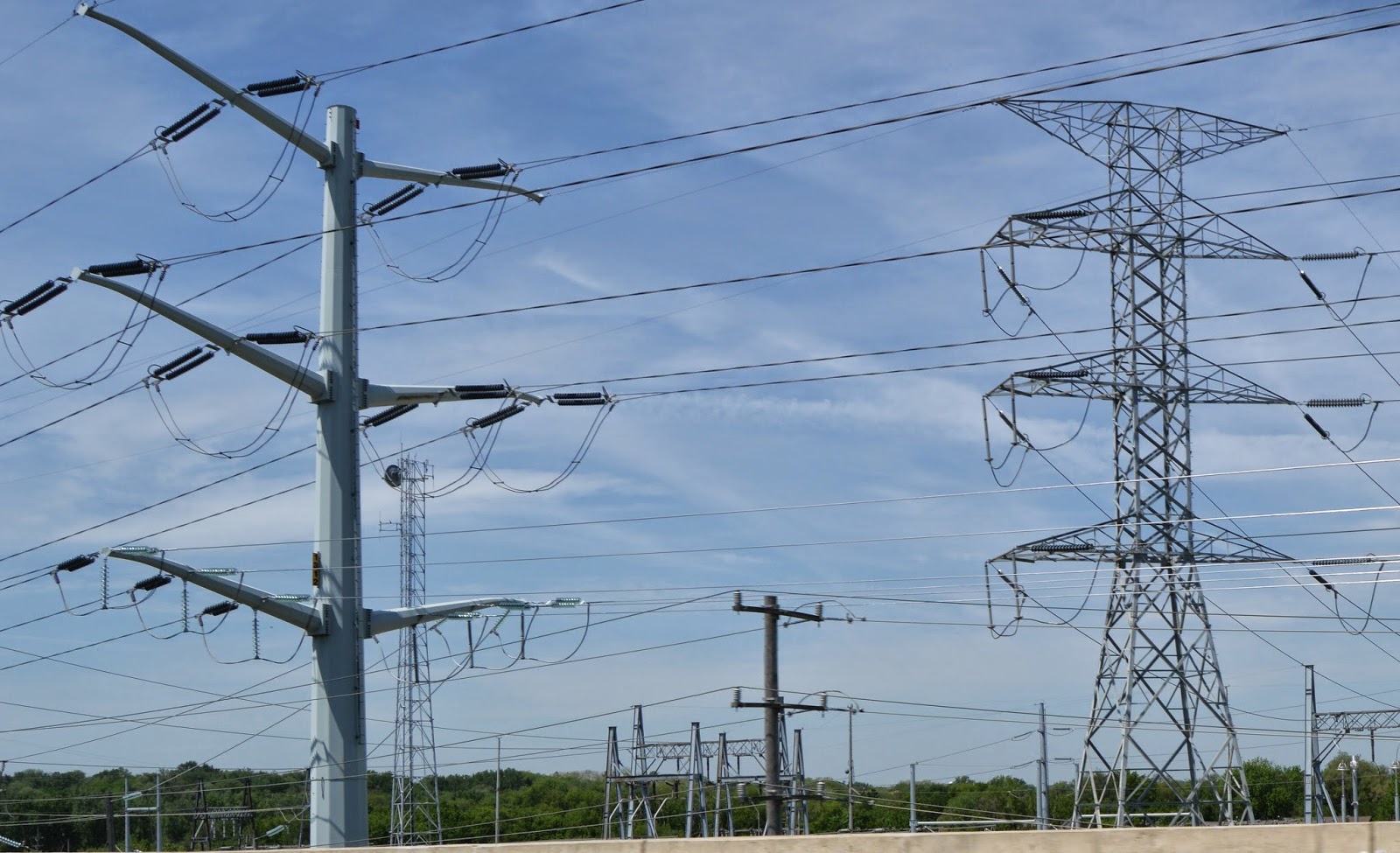 In this view, you can see that the cross connections between the line terminations for the extra high voltage tubular tower circutis are bundled conductors. But the conductors form a twisted pair between the towers. Twisted pairs are used in telephone cables to minimize cross-talk, but I've never seen it used before in power transmission

The lines leaving to the south cross the CB&Q tracks.

The line continues south along I-355 until I-355 veers towards the east at Maple Ave.

I was wondering if the corridor goes south to the Will County power plant. I'm learning that satellite maps can sometimes be better than driving a car because some industrial scenes don't have roads. Studying the map does indicate that this corridor connects with the power plant. The line traces the corridor from the south side of the yard to the power plant.

Note that the black rectangle above the end of the line would be the coal storage yard for the plant.

I thought these close ups of the switching yard would be backlit, so I overexposed the shots. I see now that was a mistake. But the equipment looking white instead of grey does not loose much information

I was surprised by how hard it was to find transformers in the yard. So I studied a satellite map, and it confirms that very little of the space is used by transformers. By zooming in, I was able to determine that the part below in red is the west circuit of the lattice beam tower, and the part in blue is the east circuit.

The part circled in yellow are transformers. I can't reconcile the satellite picture with my June 1, 2014, picture. But they both agree that the transformers are big cans rather than huge boxes that set on the ground.

The size of transformers is determined by the amount of current that they handle so the nearby suburbs must not use much current at these high voltages.

Speaking of high voltages, another reason AC won the War of Currents is that transformers could be used to step up the voltage for transmission and then step it back down for distribution. From Wikipedia, we learn:


Overhead power transmission lines are classified in the electrical power industry by the range of voltages:


While trying to figure out the voltages being carried in this corridor, I came across:
The design voltages for these insulators are 66kv (4 discs), 230kv (12 discs) , and 115kv (7 discs).
So I went back to the above closeup of the towers and zoomed in on the insulators.

The high voltage circuits on the tubular tower uses 9 discs. 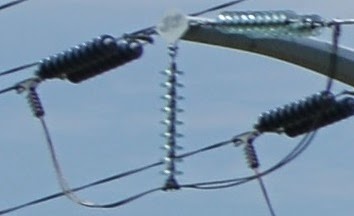 Update: A description of the transmission towers used in Minnesota
This video link was a comment on a posting.
Paulo Pavačić its a defect. there should be 2 switches. one for visual separation of conductors and other one for separation in conditions which will prevent electrical arc. They probably had to replace whole line wire because second switch failed.
Chris Howlett Arc arrestor failure
Mitch Hardwick I open our switches on 750 KVA transformers but I make sure there is no amps going through like that

Posted by Dennis DeBruler at 3:33 AM