A geometry car is used to measure the profile of the rails to determine if the profile is bad enough that they need to be ground again.
Don Dieckmann posted a couple of comments of a 3-car track testing and measurement train on BNSF at Naperville, IL.

When I was getting off at Gilman to go south on US45 to get pictures of grain elevators, I got caught by the crossing gates and pulled off to take photos of the southbound activity. It turns out that it was not a train, it was a Sperry Track Inspection Unit. There are more photos in three videos in my trip report around Gilman and Paxton. I think this service looks for defects in the rail. I don't know if they also measure the geometries such as gauge, banking and rail head profile.
Not all track defects can be removed with grinding.
If the track geometry inspection finds the rail head is out of specifications, a rail grinder can restore it to the correct profile.

This shows that they used to generate a lot of  "dust."

Keenan Callahan posted two photos with the comment: "Pardon my ignorance, but what is this that I have come across in a siding in North Texas?"
Bryson Ziegenfelder LORAM Rail Grinder. It's used to grind away rust on the rails so that trains can get better grip, which means more stopping ability in an emergency. They also start fires, so they have a mini fire department on the rear car.
Fernando A Gomez Bryson Ziegenfelder main purpose, profile the rail, to remove rail defects, prolong the life of the rail along with decreasing the fuel consumption by shaping the rail, prolong wheel usage, lots of benefits, depending where it is used, coal or freight and much more benefits.
David Hamilton Bryson Ziegenfelder Has nothing to do with rust. A truck goes across the rail ahead of the grinder and computers map the profile of the rail. This info is fed into the computers on the grinder. As it passes over the rail the grinding wheels smooth out uneven rail wear, especially in curves. Tangent rail usually gets just 1 pass, while curves get 1, 3, or 5. It's done to prolong the lifespan of the rail. As far as fire suppression there are water tankers in the consist that spray the track right behind the grinding car. There are also 2 high rail trucks with water tanks following the unit and hosing down hot spots.
Mike Sundberg A rail grinder, it restores the profile and corrugation and remove irregularities from worn tracks to extend its life and to improve the ride of trains using the track. They can start R/W fires, so they carry water etc. to prevent as they grind.

Joe Dockrill shared
Jeff Peardon Yes a rail grinder. It reprofiles the rail after rail traffic wears it out.
Ron Pagotto Jeff Peardon traffic flattens the rail the grinding train reshapes the rail.
Jeff Peardon Ron Pagotto it flattens it but also wears the inside flange on curves and that's reprofiling.

This video shows that they now control the "dust" emissions but that they still have problems with diesel emissions. It appears that each grinding unit has its own diesel unit. It takes a lot of horsepower to spin all of those grinding wheels.

If you search YouTube for "rail grinding train," there are several hits. Here is an example.
(new window starting at 30 seconds)  Unfortunately, these are night shots so we can't see if they still let the grindings drift off into the air. Nighttime is probably the only time the maintenance crew can get track time. It appears that the trains makes multiple passes back and forth over a section. They also have a fire hose so that a later pass can extinguish fires caused by sparks that flew further than the reach of the water from the nozzles.


Here is a part of another video done in the daylight that does show they generate a dust "cloud" as recently as 2011. (Look in the right background of the side shots to see the cloud.) I also saw a video that shows the grinding wheels being raised for a crossing and then lowered back down when the wheels cleared the crossing.

Rail "transposing" This is the rail equivalent of rotating your tires. That is, after one side is worn, wear out the other side. I gather that rail grinding has made the procedure obsolete.


The reason why railroads risk rail breaks and buckles with continuous welded rail (CWR) is that jointed rail is a maintenance nightmare. This photo shows that jointed rail can be kept straight. The first four tracks are Pennsy and the second four are NYC. This is the mainlines of both railroads in Chicago so they were willing to spend a lot of money on the needed maintenance. And this was back when railroads had section gangs whose full time job was the maintenance of the tracks in their section.

Napolean, Defiance & Western has done enough work on their rails that it is now hard to find a train running on really bad track. But if you look for the predecessors, Maumee & Western and Maumee & Western, you can find engines rock back and forth as they go slowly down the track. This is a demonstration of what happens when a railroad doesn't maintain jointed rails.
Skip to the jungle part of this video. It has to be really scary going over bad track and not even being able to see where the bad spots are. Scott found another good rock and roll segment. If you keep watching they do a variant of a "flying switch" --- they stop then let the hopper coast through the turnout. They must be on a hill. It shows how good roller bearings are because I don't see much of a hill.


No amount of rail grinding is going to fix this. That is why there is MoW equipment for tie replacement, ballast dumping and tamping, and even rail replacement.

(new window) I wish I knew where on the former Maumee and Western the "tomato paste line" is. Bad track still exists as of Oct 18, 2017.


Rail grinding is about the only thing that makes sense to video in the dark of the night because you can see all of the sparks flying away from the train.
A video showing cars rocking back and forth on jointed rail with the comment: "The same Iowa Interstate CBBI w/ IAIS 708, 153, and ex Southern NS 5088 (HH GP38-2) at the first spot I caught it going underneath a wooden bridge near Putnam on the Peoria branch. Plenty of rocking with the jointed rail!!" Note the dark green C&NW and faded blue Rock hoppers. And it has a NS high hood. Somewhere I read that hoppers will have harmonic rocking on jointed traffic at certain speeds. But I can't find that comment now. I believe the speed was 19-21 mph.

Even Class I railroads let jointed rail go to pot. Notice how CSX has allowed their New Rock route in Ottawa, IL form a "dimple" at each rail joint. And a "kink" at the crossing edge. I wonder what the speed limit is for this track. It must make IAIS, who has trackage rights over this track to Chicago, mad because CSX won't properly maintain it.
Jointed rail need not be bad in the 21st Century. In the same town, Illinois Railway has maintained their jointed rail for higher speeds. The fact that jointed rail does require more maintenance is why many routes have replaced the jointed rail with Continuous Welded Rail. 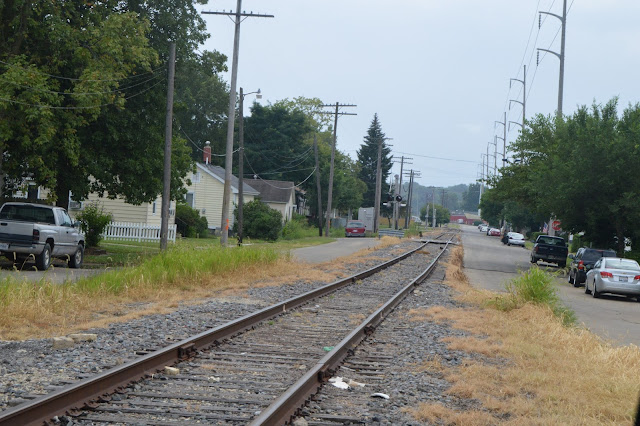 Posted by Dennis DeBruler at 6:27 AM