(Satellite)
Seldom is a connector so important that it is named. Normally they are referred to as a quadrant of a junction. But Bob Dietz comments in Mark's posting taught me that the south leg of the wye that Amtrak uses to turn its trains is called the Jefferson Connection. It connects the BNSF/CB&Q route with the Metra+NS/Pennsy route. Another indication of its importance is that it is double tracked. It might be as heavily used today as it was back in the heyday of railroading.
(More photos of trains being turned on this connector)
Here is an Amtrak using the Jefferson Connection to head south across the Canal Street RR Bridge.

That train had previously backed out of Union Station onto the BNSF/CB&Q tracks. (Note the train washing building on the right side of this picture.) 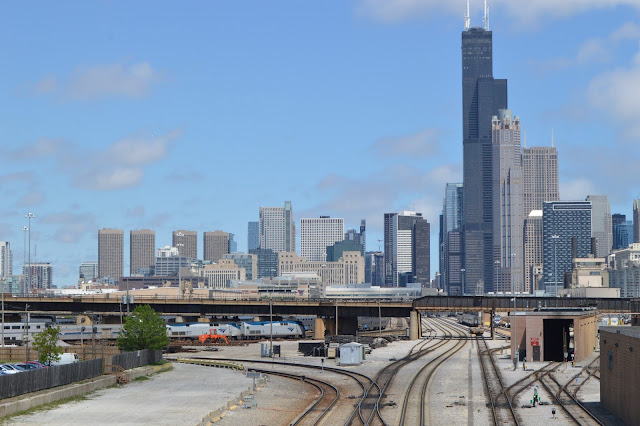 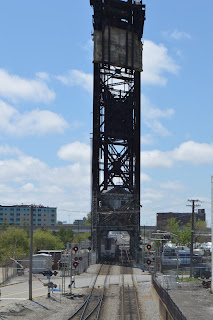 The Amtrak train stopped on the bridge while the turnout behind it was thrown. 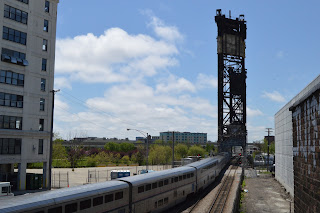 Then it backed up north to Amtrak's service facility (below). And then I discovered the camera would not take any more pictures because the battery was low. (I'm learning that it goes from "two bars" to "won't work" rather quickly.) I think it was heading to the train washing building, but, since I couldn't take any more pictures, I did not wait around to confirm its destinations because these trains movements are slow. 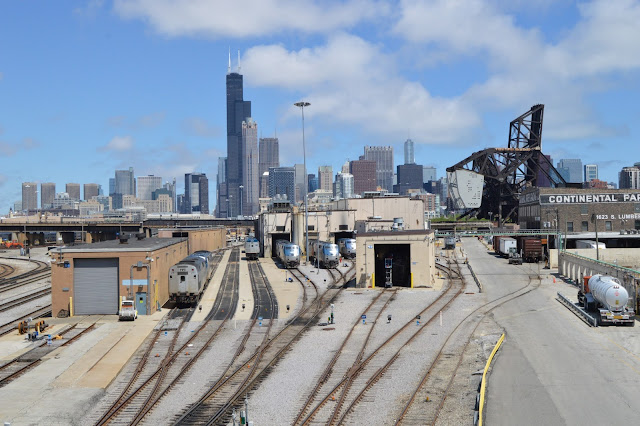 As Mark's photo illustrates, the Jefferson Connection is also used by UP to transfer intermodal cars between its Global One and Canalport yards.

The Jefferson Connection is also used for runthroughs between BNSF and NS. This was an eastbound oil train crossing the bridge with three BNSF engines. It also taught me that you need to go to Ping Tom Park during the morning. May 13 was a special trip to retake pictures of this bridge with a morning sun and blue sky. 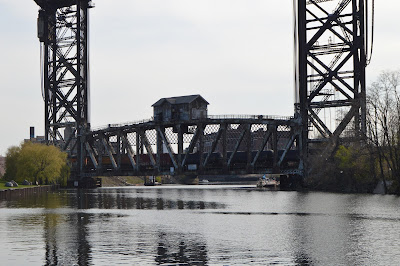 A later picture showing it was an oil train. (Actually, it could have been an ethanol train. There is no way I'm going to read the placard from this distance.)
Update: This is the west end of the connection taken from Canal Street.


Previous notes show pictures of the turning movement with timestamps so that you can get a feel for how long it takes. (And because I forgot I wrote them.)

cmraseye Flickr 2010 Photo caught a UP special on the connection. It is probably headed south on the CN+UP/GM&O because he caught it again on the Kankakee bridge in Wilmington.
Posted by Dennis DeBruler at 5:04 PM