This factory in Springfield was built by Illinois Watch Company. As the watch business declined, the Sangamo Electric Company grew to fully occupy the factory. By 1962 Sangamo "employed 2,800 workers making electric transformers, meters, time switches and speedometers. In 1978 a French company bought Sangamo and closed the Springfield plant." Sangamo's contribution to WWII was "anti-submarine sonar and mica and paper capacitors, as well as watt-hour meters." [Lost Illinois Manufacturing posting]

In case the Facebook "posting" link is not permanent, I include the first two photos from the posting and summarize the posting. 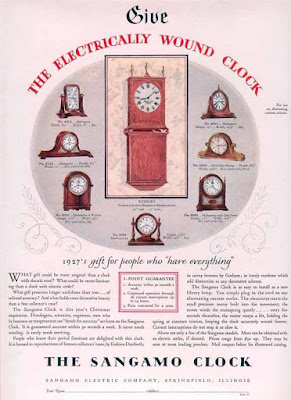 This 1927 advertisement explains why an "electricity" company got started in a watch factory. In the 1920s electricity was unreliable and the 60-hertz frequency was not accurate, so they used electricity to wind a 24-hour mainspring of a clock that used "a precision jeweled lever escapement as the heart of the movement."

As electricity became reliable and accurate, the mechanical escape clock became obsolete. But the company had already started making watt-hour meters and other products and continued to grow.

(One of the first commercial atomic clocks was bought by a power company so that they could make small adjustments in their 60-hertz power so that over a period of time a day would average, with atomic precision, 60cycles*60seconds*60minutes*24hour cycles.)

The factory site now has the Illinois Environmental Protection Agency and a McDonalds.

At the end of the posting are the links: county and company.
Update: It is a 52:08 long silent film. The You Tube comments are extensive.

Email ThisBlogThis!Share to TwitterShare to FacebookShare to Pinterest
Labels: timekeeping