(Satellite, most of the yard has been converted to intermodal service. But it still has 10 classification tracks.)
When Richard Fiedler shared Don's posting, he added the comment "At Landers in Chicago." His share had the following comments:

Ed Bell Would this require a new frame?
Richard Fiedler Yes the old 2-8-2 frame was not used in the rebuild instead a new one piece cast steel frame by General Steel of Granite City was used. The new frame had the cylinders cast into it. The boiler, cab, and tender were reused. The engine axels had roller bearings. The tender retained friction bearings.
Richard Fiedler My understanding is they were fast and free rolling but a tad slippery.

It looks like the coaling tower was made of steel. Richard Fiedler concurred: "That's what I figured too. The main giveaway was the post war 1950's style bungalows in the background on the other side of what appears to be 79th St. That's the neighborhood I grew up in. I would figure this shot to bd from 1952-3 the very end of Wabash steam and near the end of the building boom in that part of the neighborhood. The area in the yard where the coal chute stood was to become piggyback ramps and a large LCL freight house."


Yes that is the water tower a steel one and just to the right is the pump house that lasted into the 1990's and up to the time that NS converted the whole yard to intermodal. To the right of the water tower was the pump house, the storehouse, and finally the "hotel" or bunkhouse for crews laying over. The bunkhouse was pictured in the book on the 4th district and it was a wood 2 story affair and was quite decrepit from what I remember. The water tower and bunkhouse disappeared by 1960 or so the storehouse later freight house lasted into the mid 80's. To the left or west of the water tower were the ash pits and coal chute and those disappeared late 50's when the area was converted to TOFC ramps and trailer parking.

I see that large rectangular shadow to the far left and that must be from the coal chute. The smaller shadow center just below the sand house area is the water tank and it casts a long thin shadow.

Phillip Ness posted the question: "When was the Landers yard built in Chicago?" Richard Fiedler commented: 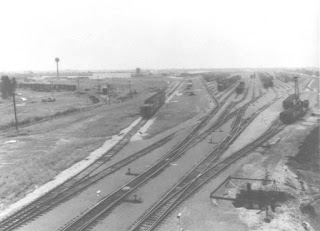 The line was built in 1879-80. A Wabash structures book lists a frame depot 16x40' built 1891 and other structures built there between 1893 and 1894. In 1906 a concrete 20 stall roundhouse was built adjacent to 79th and California. The yard was rebuilt in the late 40's and again in the late 50's. The viaduct spanning 79th and Kedzie was put in in the 49's expansion. Prior to that 47th street was the primary Wabash facility for manifests and as that facility diminished Landers increased. All passenger and freight locomotives both steam and diesel were serviced at Landers. Prior to the Landers roundhouse Wabash engines were services at a 19 stall roundhouse at 40th St built in 1879.

Update: Richard Fiedler's posting indicated it was page 409 in the Chicago Smoke Abatement Book.
Albert J Reinschmidt Really cool! I had heard that the B&OCT had come this far north. Later turning east @ 83rd, wonder why the change. Also hard to. Believe that in the 50s there was a sharply curved connecting track between the two yards. Only saw it used a couple of times. Later trains would saw back and forth over Western Ave.


Posted by Dennis DeBruler at 3:20 PM