I found enough pictures of the inside of factories that used line shafts and leather belts that another posting on the topic is warranted.
(Update: old gas engines running belt driven machine tools, Morse Twist Drill Factory
Waltham Watch has links to lots of 1890s photos, most of which include line shaft driven machinery.)

The room in the Rock Island arsenal that manufactured of the Springfield rifle
Roger Hubbard posted two photos with the comment:

Moving on from my earlier photograph. At the back of the shop was a foundry which generally cast once a week. In the second photograph is the green sand mould for a ships propeller. A single blade of the prop would be made in wood, in the pattern makers shop & the single blade would be used to make all blades in the sand mould. Once it came out of the foundry into the machine shop, a couple of jobs stick in my memory. 1) Parting off of the spru. This would be done in the large facing lathe in the original photograph. Generally an apprentice was tasked to part of the spruce. I can’t remember exactly which way the lathe ran, but do know the parting tool was upside down. For those of you who have the terrors parting off, imagine a parting tool about 3/8 inch wide with a six inch overhang? Once the spru was off a skilled turner would take over to machine the taper bore, which was also done in this facing lathe. Many shops would machine the tapered bore in a vertical milling machine using a boring head, but we did not have a mill large enough, nor a boring head capable of machining tapers. 2) When a prop comes out of a foundry, some of the pour is run off to cast a test piece. This test piece was also tasked to an apprentice. It had to be machined to exact dimensions, no tolerances given. The frustrating thing was that once completed it was pulled apart to test for tensile strength. Many years later the Engineer in me realized that in all probability exact dimension were not necessary as corrections could have been made in the calculation!

Rich Behrends posted three pictures of a factory interior with the comment: "Merchants' Despatch Transportation Co. Rail car machine shop. Dated: between 1900 and 1906." I also included a picture of the factory's product.

Russell Sauer posted two photos with the comment: "Thanks for the add! First picture is Iowa Marine shop in Belleview Iowa in the 30's if I remember correctly. I took the 2nd photo from the same angle in 2006." The owner passed away, but the machinery is being moved to a museum.


Some more modern shops that still have some line shaft machines.


Stace Drumm posted two photos with the comment: "Found this out on the web, had to share." 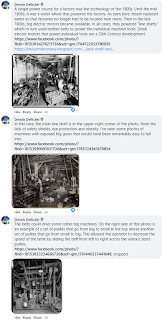 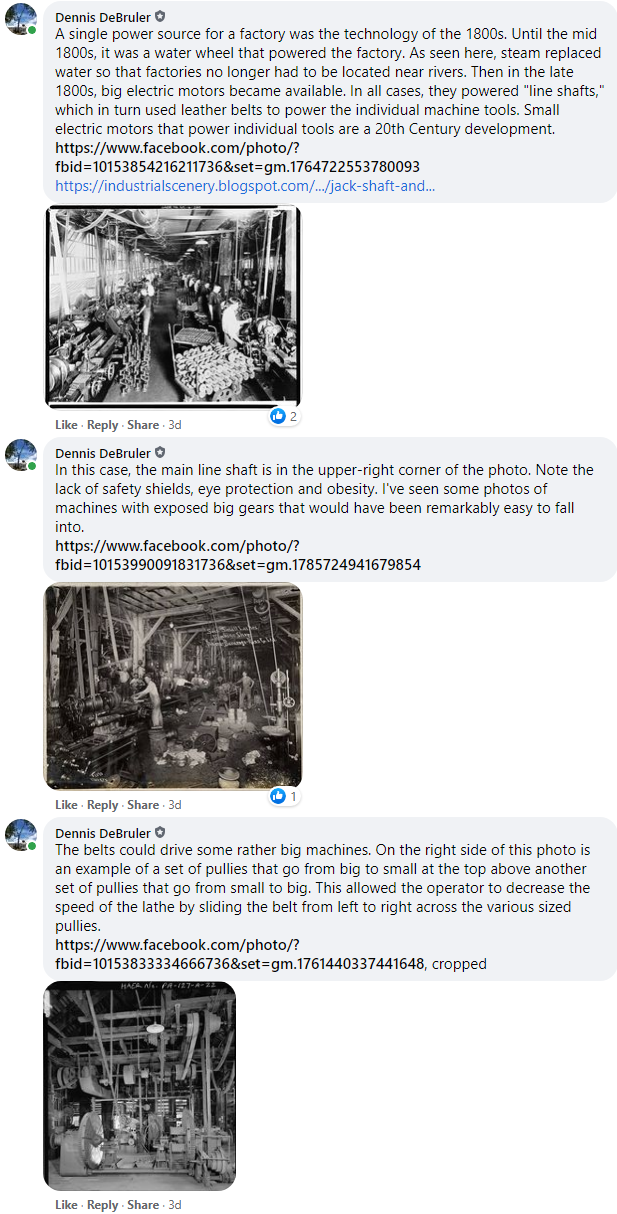 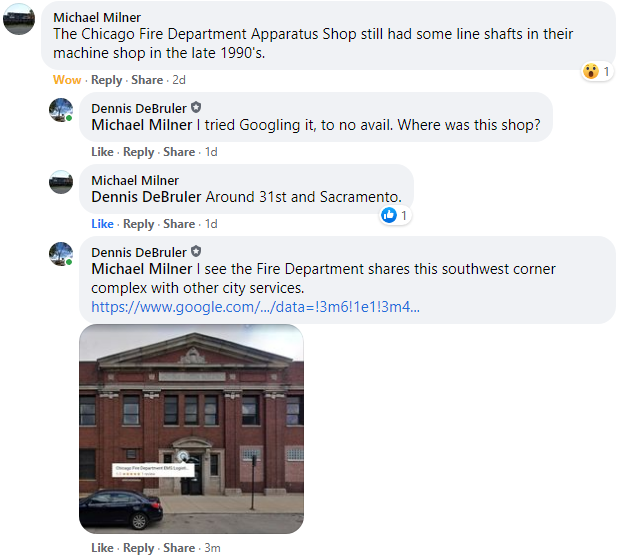 
This link is a treasure chest of old machine shop photos. I especially like this one because the levers are red so you can clearly see that sometimes the clutch that controls a machine is up near the ceiling.
An early (silent) video of the machine shop of the Westclox factory. You can see that they are still using line shafts to power the equipment next to the wall. It appears the factory is in a transition period between belts and electric motors.
A shop in the factory that has a "forest" of belts.
A steam powered machine shop.
The reconstruction of Edison's shop.
W. A. Young and Sons Foundry and Machine Shop
Fully functional machine shop
Posted by Dennis DeBruler at 3:17 AM

Email ThisBlogThis!Share to TwitterShare to FacebookShare to Pinterest
Labels: machineTool