Because new gas fields are being tapped, gas has become cheaper (and is already cleaner) than coal so there is a need for more pipelines to carry the gas from the new production fields to the new markets. So many power generating plants had been switched from coal to gas that during the severe 2014 winter some of the gas-powered plants could not run at full capacity because the pipeline infrastructure could not supply the needed gas. [I remember this from a Chicago Tribune article explaining Exelon/ComEd wanted a rate increase for its nuclear power plants because of the dependability of their fuel supply.]

Unfortunately, a link I saved for a video of a pipeline being laid was temporary and I can no longer access it. Fortunately, it is easy to find other videos for the laying of big pipelines, for example: 36" in Tazewell County, IL and northeast Nebraska. This video illustrates the various stages of laying a pipeline.

One advantage of going down a "You Tube rabbit hole" is that you learn new things. They can now ram big pipes under roads and other obstructions. I guess a big weight is pushed back and forth with compressed air in that "tube" they connect to the "cotter segments" and the weight is allowed to bang against the pipe end of the tube. Then they use water to wash out the dirt that is in the pipe after it is rammed under the road. Unfortunately, I could not find any information on this installation in their referenced link. I did find some more examples: a large diameter pipe and ramming through a landfill. An 18" ram can install pipes up to 56". But it seems like just one big rock in the wrong place would defeat this technology.

While driving west on US-20, I drove past a pipeline laying operation. So I found a place to park and walked back to check it out. This is an overview of the operation. In the background, you can see two excavators lifting a pipe. By the power pole in the middle are two men that are welding one segment to another.

When I got down by the welders, I took a closeup that included their specially equipped truck.

As I got closer to the excavators, it turns out they were not putting pipe into a trench but were moving a segment west past the farmer's driveway.

I switched to video to record the speed of their movement and the flexibility of the pipe.

Below is a screenshot I took from another video to show that the eastern (the one on the right) excavator is going past a trench that they have dug east of the farmer's driveway. I assume that is where the pipeline currently ends. They are moving the segment that will go across the farmer's homestead. They built it east of the property and are now moving it into position. 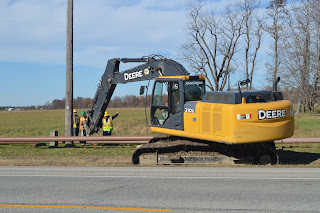 When the lead excavator reached a power pole, they lowered the pipe, unattached it, and... 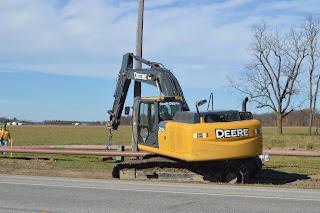 ...reattached it on the other side of the pole to continue moving the segment to the west.
When the segment cleared the driveway, they put it down.

As I walked back to the van, one of the workers told me to make sure I stayed on my (south) side of the road because they are X-raying a weld. I include two pictures to show that the man in the blue shirt is rotating something up the side of the joint. I guess the X-rays are pointed at the pipe (and me) and not the workers because they are not wearing a lead vest.

As I left, I took another overview shot.

Looking further west, I see they have dug another trench.

I did not see any horizontal drilling equipment, so I assume they are going to cut-and-cover across the farmer's driveway and lawn. They have delayed digging that trench until they are ready to put the pipe into the trench to minimize the impact on the farmer.

Update: They don't have to cut-and-cover for large diameter pipes.. They are pulling a pipeline under an airport. At the end of the video, you see they drilled a pilot pipe under the airport with regular horizontal drilling equipment, and then they used the smaller pipe to pull the big pipe under the airport. They use the rotating function of the horizontal drill to spin blades in front of the big pipe that enlarges the hole for the bigger pipe.

Pipelines also made use of railroad right-of-ways. Here we see the tracks of the Erie Lackawanna have long been abaondoned, but Joseph indicates a gas pipeline is still in service.

Posted by Dennis DeBruler at 11:23 PM

Email ThisBlogThis!Share to TwitterShare to FacebookShare to Pinterest
Labels: energyGas