The CB&Q had "Central Warehouses" south of Union Station. These notes examine the evolution of CB&Q's support freight houses.

In 1929, the team tracks went all the way between Union Avenue and Canal Street south of the east end of their Western Avenue Yard. And I note that rail service still went south of 16th Street into the Schoenhofen Brewery.

<update>
Erie had a terminal with CB&Q so CB&Q's freight facilities show up on Erie's map.

</update>
By 1938, the freight house on the right was removed to move the Jefferson Connection further south to expand the CB&Q Commuter Coach Yard. The freight facilities above the St. Charles Air Line embankment were owned by C&NW.

By 1941, a gantry crane was added to transload heavy shipments between trucks and freight cars.

By 1948, a gantry crane was also added to the west side of the Western Avenue Yard.

This gantry crane also appears to have been built after the 1938. The long east/west building near the center of the top half of this aerial of the west side of Western Avenue Yard has been removed by 1948.

Also by 1948, CB&Q had replaced some rail serviced industries with a newer freight house southwest of the western end of the Western Avenue Yard.

The 1953 topo map still shows the old rail-served industries, but...

In fact, the freight house that replaced the roundhouse is still standing!

But the weeds indicate it has not been used recently. I wonder if the roundhouse, ash pit, etc. contaminated this land so that now it can't be used without a lot of cleanup expense after they tear down the freight house. That would explain why the freight house still stands as a monument to when trains, not trucks, hauled non-bulk freight.

BSNF still claims that they have an intermodal yard here. But it is obvious that it is now just a parking lot.

More details concerning the freight house in Gary's photo above.

They have torn down the buildings, but they haven't bothered to remove the concrete floors and paving.

I happened to take a photo of this vacant lot when I heard a commuter train on the BNSF mainline. Is this land also contaminated?

The land used by the freight houses on the east side is now an expressway and residential units.


The 1963 topo shows the buildings have been removed between 19th and Cullerton Streets. I took this photo of the building on the south side of 19th Street because of the two water towers. That building has had the windows remodeled, but I don't think it was built since 1963. 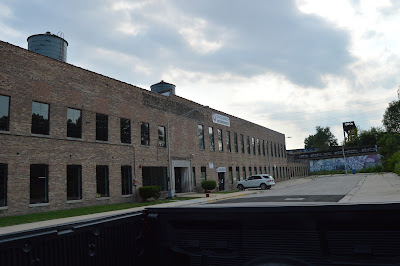 And we can still see railroad tracks for an industrial spur in the lower-left part of that block.
I can believe that the building on the east side of that block was built in the 1960s. 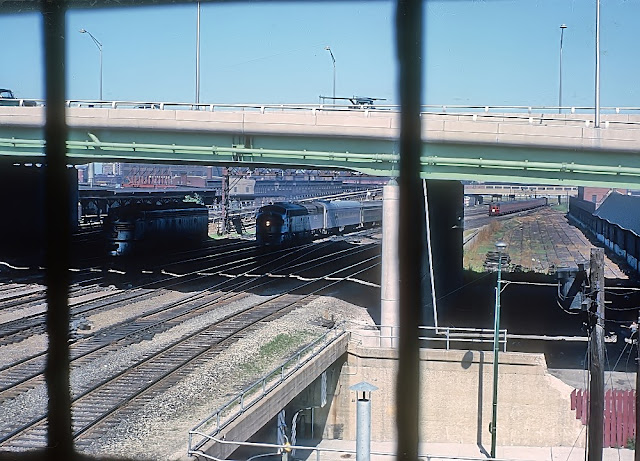 Marty Bernard posted
Looking Out Union Avenue Tower's East Windows
Union Avenue Tower was at the west end of the wye south of Chicago Union Station. It was a CB&Q tower. This photo from August 1, 1963 is looking through the east windows of the Tower. We see the Dan Ryan Expressway above the tracks and Union Avenue below, going under the tracks. The rolling stock left to right is Train 123's Motor under the Dan Ryan, Train 133 heading west, Train 23's Motors (the Afternoon Zephyr) and GM&O Train 2 (the Abe Lincoln). "Motor" is what a diesel was called by the tower man and the dispatcher. Trains 123 and 133 were Dinkys. The Abe Lincoln is being turned on the Wye. Above Train 133 you can see the St. Charles Air Line taking off.
My guess "motor" was to distinguish diesels from steam. Union Avenue Tower is long gone. It was the start of the Q's Racetrack.
[Mark Hinsdale pointed out the freight house on the right side of this photo.]

Posted by Dennis DeBruler at 8:41 PM