McAlpine (#41) Dam and The "Falls of the Ohio" River at Louisville, KY

In the 981-mile length of the Ohio River, there is only one place where it flows over bedrock, the Falls of the Ohio. The rock here is an ancient Devonian Reef [nkytribune] and it is full of fossils. In this staircase diagram of the Ohio River where the vertical scale is exaggerated, you can clearly see the significant drop of the river bed near Louisville.


The Falls of the Ohio is one of the largest naturally exposed Devonian Fossil Beds in the world.  The “Falls” is in fact not one waterfall, but a series of rapids, which prior to construction of the various locks and dams, dropped 26 feet in about 3 miles, forming a series of rapids, waterfalls, and chutes.  Now, the drop in elevation occurs entirely at the lock and dam structures.  The normal upper and lower water levels are 37 feet apart; the normal upper pool elevation is 420 feet above mean sea level and the lower pool is 383 feet above mean sea level.   The area has a rich cultural and natural history.  The area was used as a crossing point for animals, and as a hunting area for Native Americans.  More than 260 bird species have been sighted at the Falls, and a wide variety of other wildlife is present.  In the river’s natural state, boats could traverse the falls during periods of high water only, so the area became a stopping point while goods were unloaded and portaged, thus creating the towns of Louisville, Clarksville and Jeffersonville.  When there was enough water, boats could attempt to run one of three chutes, or passages through the Falls, but this required expertise and boats often wrecked during the attempt.  In 1830, the 1.9 mile privately owned and operated Portland Canal with a 3 flight lock at the lower end was finished.  By 1930, a new concrete and steel dam was built in conjunction with a hydroelectric plant project of the LG&E company.  The dam was constructed in an “L” shape, extending from the Indiana shore and gave the Falls area its present look.  See the webpage for McAlpine Locks and Dam for more history on the locks and dam. [Their link is broken. Try this one.] [USACE-recreation, expand the History heading]

This Z configuration is expensive because of the 2-mile fixed weir, but the two sets of control gates allow the USACE to emulate traditional summer-time flows (low) over the rapids by closing the five upstream gates and using the hydroelectric plant and the four lower gates to control the upper-pool depth. During the Spring and Fall wet seasons, it can give the upper gates priority to be open to maintain a strong flow across the rapids. This seasonal variance of the river flow helps preserve the wildlife that was established when the level of the river naturally varied significantly during the year. And it allows fossil viewing during the dry season.

Standing on the visitor's center viewing platform, I took a sequence of three photos from upstream (Southeast) to downstream (Northwest) to catch the weir wall and rapids. 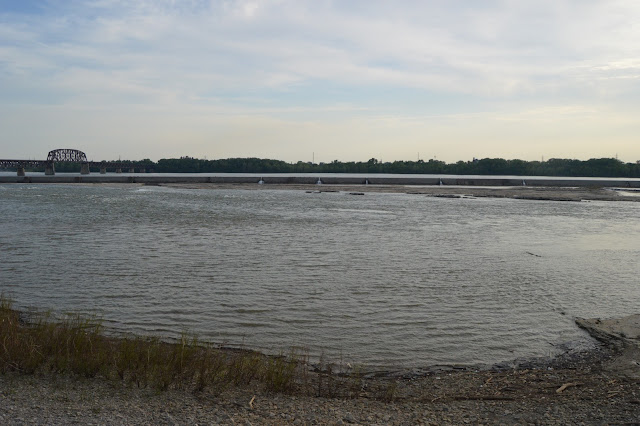 This view is looking at the upstream control structure from the path to the wheelchair accessible viewing platform. 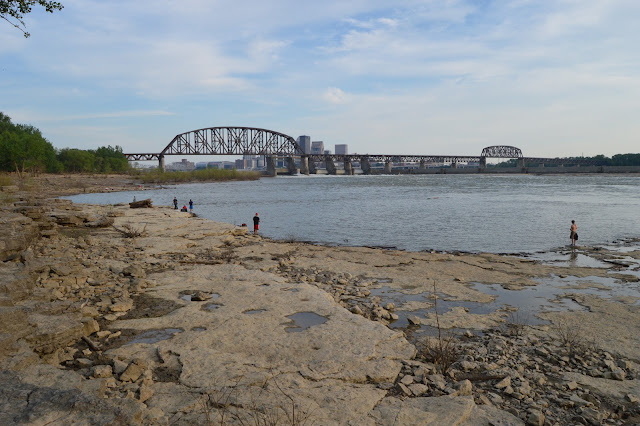 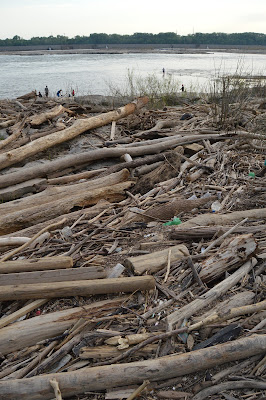 Since there were people down by, and in, the river, I decided I should be able to get down there also.

But first I had to work my way over the debris field. 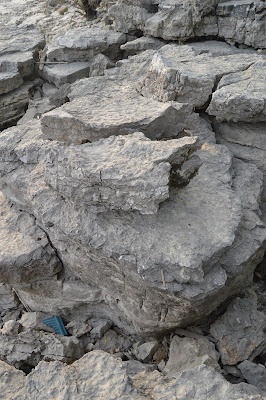 And then find a path over the rocks that did not require crossing deep crevasses. (This picture is taken looking down.) 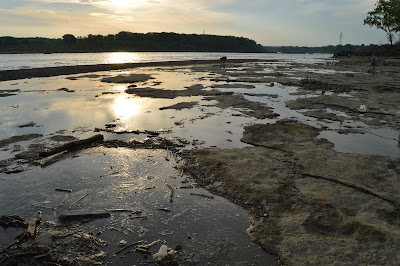 This was as close to the river as I was willing to get.


But it was far enough out into the river bed to let me get a good view of the five Tainter gates (below). Note the water turbulence around the through-truss pier. It is a good thing it is built on rock. Even so, it is amazing that it has been able to avoid scouring after decades of turbulent flow around it. It does look like they have sheathed the base with a protective layer of concrete. 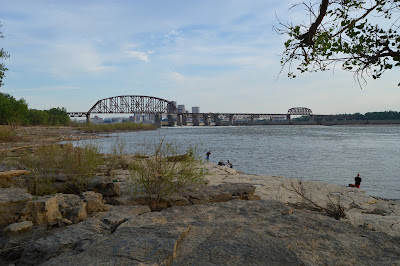 On the way back, I took an overview picture. Note that the dark rock in the foreground is significantly higher than the white rock below. And we can see another one of the crevasses in the upper layer. Most of the edge of the dark rock was a sharp drop off. That was part of the challenge of finding a path down to the white rock. 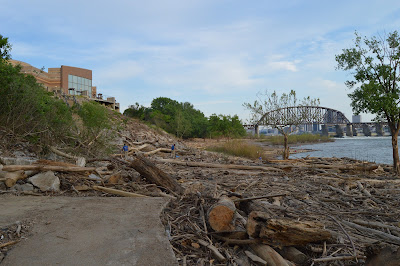 I didn't discover this ramp back to the parking lot until I went back up to the center. I came down the river bluff from the center using those stair steps peaking through the trees on the left. And I see now that I probably should have gone upstream from the base of those steps rather than the downstream path I took. The balcony of the interpretation center has a series of interpretive signs. They cover the topics of the Fossil Beds, Birds, Wildlife Conservation, and River Navigation.
The view below shows that the river is close to the visitation center when the river is high. That is, all of the foreground in the above photo is under water when the river is high.

In fact, Google Map captures that scenario.
Bing's aerial view shows the case where both the upper and lower gates are partially open.
Some photos from an Album:

I'm trying to figure out why two of the bays have a "bar" across the top but the other two don't. The "bars" don't look tall enough to be emergency bulkheads.
Posted by Dennis DeBruler at 10:51 PM