My photos of the the Falls of the Ohio that are downstream of this bridge have been moved to McAline Dam.
While studying the Louisville and Portland Canal, I came across these photos of this bridge.
At a rest stop along I-65 on my way to Louisville, KY, I saw a sign that showed how to get to the interpretive center for the Fossils at Falls of the Ohio. So I found this bridge as a happy accident on my way to the interpretive center. 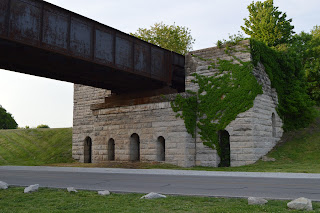 On the north end is the largest bridge abutment I remember seeing. In this case, I should have waited for a car to come by to give some scale to that structure. In Bridge Hunter, J.P. did take several photos of this structure including one with a backhoe for scale.
The current 1919 bridge evidently reused the cut-stone piers of the 1870 bridge because the first large through truss is over the old "Indiana Chute." Because of the large truss in the middle of the river, there used to be another "chute." The long spans were retained in 1919 because the dam had yet to be built. Obviously, neither of these shipping lanes are used today.
The third truss that we can barely see peaking out above the trees in the first photo is the lift bridge that spans the canal that used to be spanned by this swing bridge. The first canal to bypass the rapids here was built 1825-30. "It was 1.9 miles long, 64 feet wide and had a total lift of 26 feet with a three flight lock system." [Sign at Falls of the Ohio Interpretive Center]

Tom's photo posted by Ron of the L&N engines also caught the lift and control towers. To my surprise, the control tower still exists.

The gated dam that we see today was not built until the 1960s when the 1200'x110' lock was added. The short part of the L-shaped dam that was built in the 1920s had wicker gates and tows still used the Indiana/Indian Chute when the river was high. [DeBruler]

Here is another older photo showing a tow using the Indiana Chute.

I never noticed how massive the members in the approach spans are until I saw this photo.

The river is continuing to run high during the spring of 2021. But the hydrologic chart shows it was at just 31'.
J.B. also shows us what it looks like when the river is running low.
He is flying that drone rather far over the river.
(new window) A nice drone overview, followed by a tripod shot of a CSX northbound train, then drone footage of that train, then a tripod shot of the DPU crossing the lift span and then back to a drone shot to follow the DPU across the bridge. At 4:28 you can see that there is little water in the Falls of Ohio. At 8:46 is a timelapse of the bridge going up. At 9:17, he covers the Kentucky & Indiana Bridge. At 24:52, he ends the video with drone footage of the bridge.
JB Rail Photog caught a CSX auto train on the Indiana side. I wonder if the train is full of Ford vehicles made at the Louisville plant.

Posted by Dennis DeBruler at 9:38 PM