I once saw the question of how was the coal loaded into the tall coaling towers that were used by railroads to fuel steam locomotives. One way they were loaded was with a skip hoist. But even if a tower is still standing, it has probably been stripped of its metal parts so the skip hoist is gone. But skip hoists are still used to load blast furnaces. In fact, loading blast furnaces might have been the application for which skip hoists were invented. Unfortunately, integrated steel mills are so big that there is no way I can get close enough to a blast furnace to get photos of the skip hoist. Fortunately, when Sloss Furnaces in Birmingham, AL, shut down their city furnaces in 1971, they donated them to the city. And enough people realized that they were more valuable than yet another pile of condos or apartments that they are preserved as the Sloss Furnaces National Historic Landmark. During this year's trip from Florida to Illinois, I visited that site. It rained on and off, so the photos won't win any contests, but they do provide some information.
(Update: please see a comment for details as to how these operated.)

In this overview image we can see that each blast furnace has inclines on its side. Those inclines are skip hoists and in the left one we can see that a hoist has two skip cars. As one goes down, the other goes up so that they counterbalance each other. Since the cars meet at the halfway point, we can see that the incline extends quite a bit below the ground.
This view of the other skip hoist lets us see its two skip cars. It also shows that quite a bit of the incline is hidden underground.
The Street View image above shows that there was a rail trestle that went across the bottom of the skip hoists. There were two tracks on that trestle. Under the tracks are storage bins. And under those bins is the charging tunnel. Here is their sign that illustrates this construction.
And here I zoom in on the text and crank up the contrast so that it is readable. 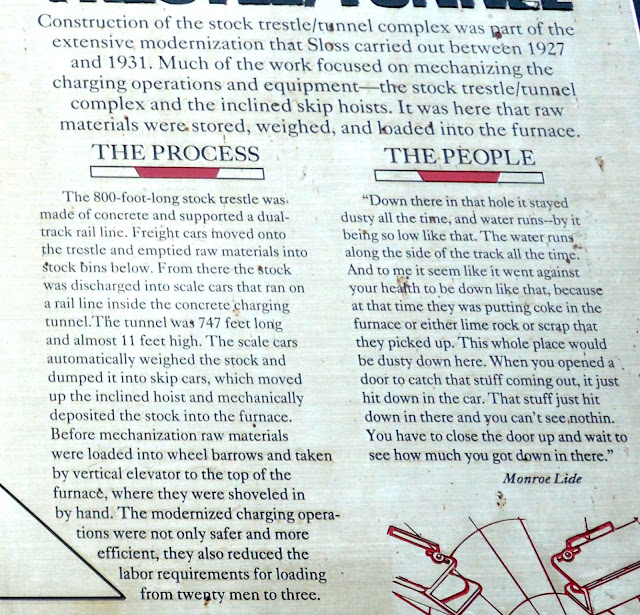 Installation of the double bell hoppers at the top of the furnace was part of the upgrade. Before that, gases came pouring out of the top. Much of the gas was carbon monoxide. Sometimes one of the workers shoveling stuff from a wheel barrow would die and fall into the furnace!

This is the path to the stock tunnel. Note the sign I reproduced above. 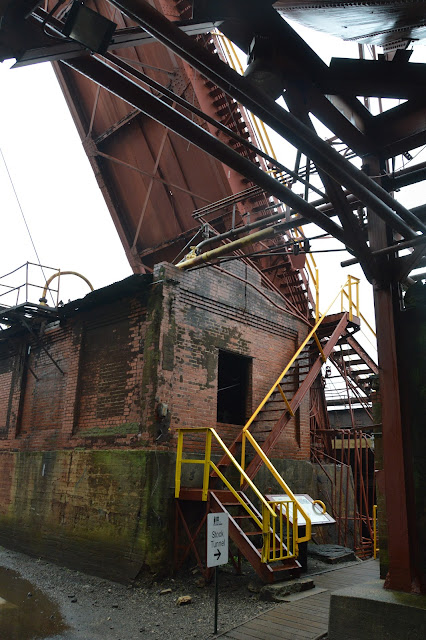 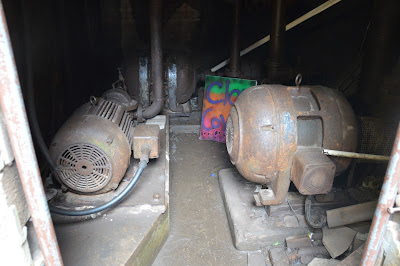 Along the way, there was a room with at least three pumps powered by at least a couple generations of electric motors. 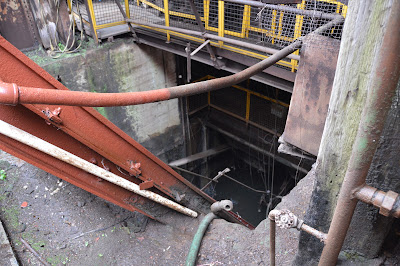 Now we are beside the hoist looking down into the pit. 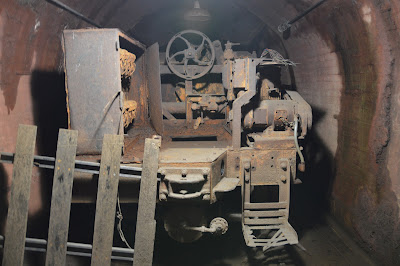 After going down several stairs, we are in the tunnel. Our view toward the other blast furnace is blocked by the scale car and a lack of lighting. 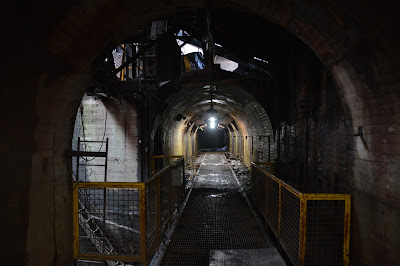 But in the other direction we can see what is left of the tunnel. Note the handrails on the bridge over the skip hoist. 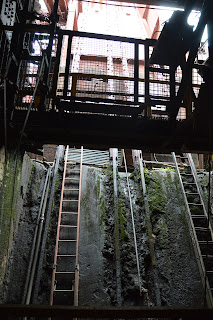 Now I'm standing on that bridge looking at the two tracks for the skip cars and a couple of ladders. I presume the ladders are permanently installed to make maintenance easier. Note there is a higher level bridge. 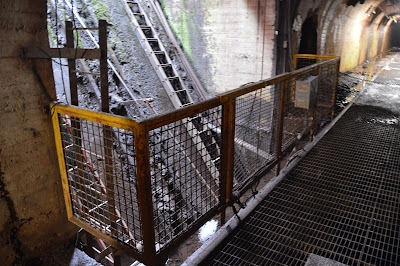 As discussed earlier, the incline goes far under ground. That length under ground positions a hoist car to be under this bridge when the car is at the end of its tracks.  During operations, I assume that this bridge wasn't here. Specifically, there was just the tracks that went over the hole. That would allow the load in the scale car to dump freely between the tracks into the hoist car waiting below. The bridge above this one would have been the one that workers used to cross to the other side.

I went up to the higher bridge and got this view of the skip cars on their tracks. 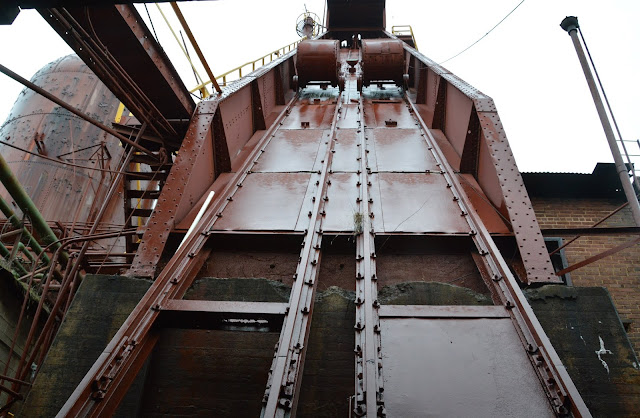 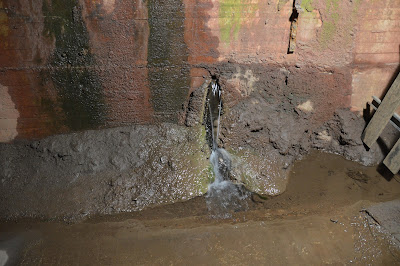 Remember when I said there were periods of rain that day? I took this photo while in the tunnel. I don't remember hearing the pumps we saw running. Maybe the city now has storm sewers below this level and this water can go down a drain.
Here are a couple of photos I took as I left the skip hoist area. 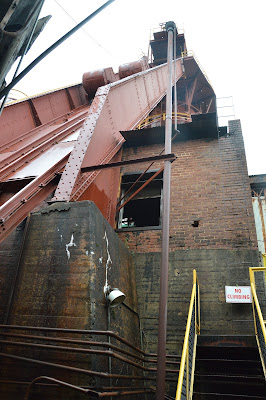 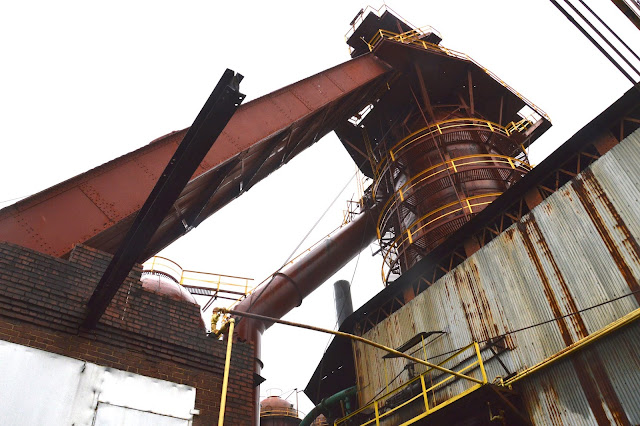 Later in the tour I took a walkway over to the trestle and got this view. which catches the base of "our" skip hoist and shows the skip hoist for the other blast furnace. 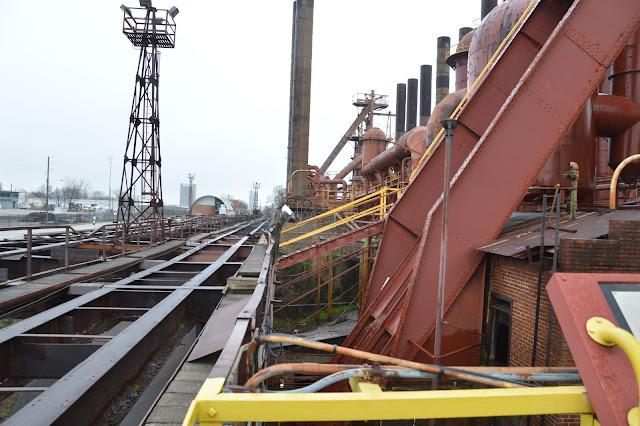 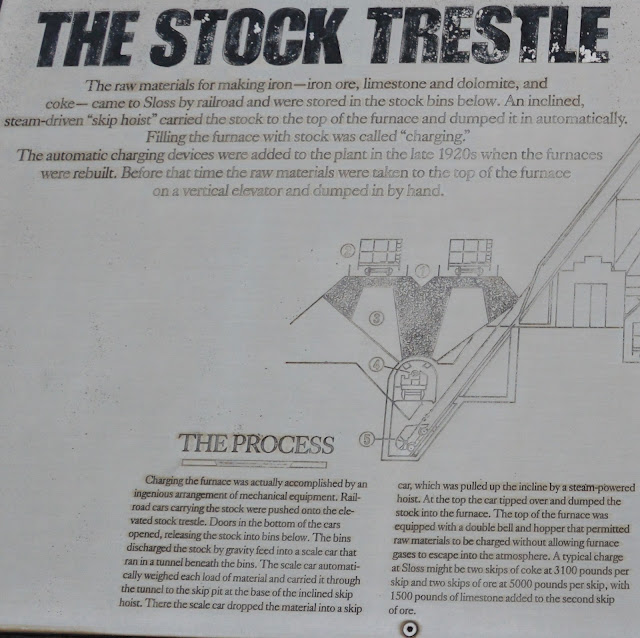 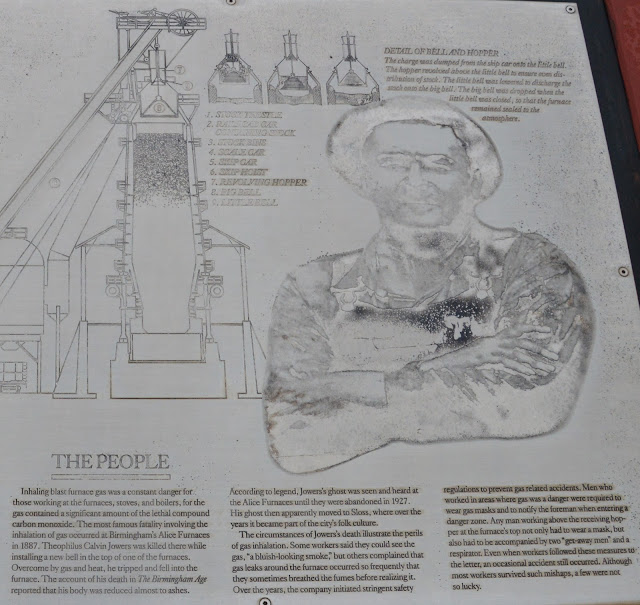 I haven't forgotten that the reason for studying skip hoists was their use for loading coaling towers. Here is a photo that is old enough that it has all of its metal parts including the skip hoist.
In this one, it looks like they removed the hoist rails but left the maintenance ladder.
Since the above photo, they have removed the vine from the ladder.
For this tower, the bent the rails so that most of the length is straight up and down to reduce the amount of land needed by the hoist. It would be interesting to see how the loaded the skip cars.


In this close up we can see two sheaves and cables at the end of the tracks. That allows the machinery that hoists the skip cars to be located near the ground where it is easier to maintain. The machinery probably includes an electric motor driving a spiral-grooved drum. My guess is that the system uses one cable. The cable goes from one car up to its sheave down to the spiral-grooved drum and then back up to the other sheave and down to its car. 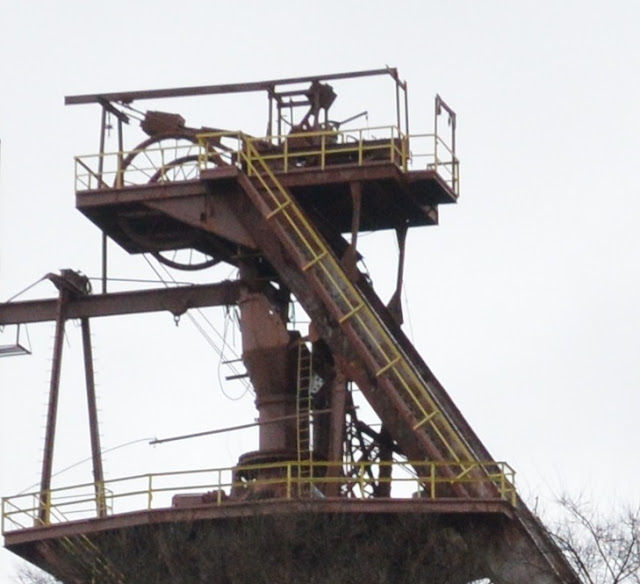 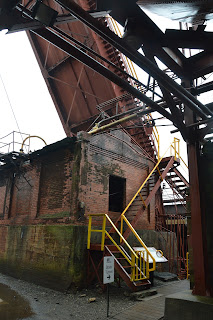 Looking back at my photos above, this building was the machine room. But I don't know why I can see just one cable going into it.

I know that some blast furnaces still operate in Northwest Indiana, so I used the satellite map to try to find them and their skip hoist. I learned that the US Steel Gary Works seems to be down to just one blast furnace. I remember when driving along the Indiana Tollway in the 1970s that you could see a handful of them belching out orange smoke and the sky itself was orange. And it stank when you drove into the orange cloud. The resolution of this satellite image is good enough to see that it has a skip hoist. But not good enough to find both skip cars.
I discovered that Arcelor-Mittal has replaced the skip hoists with conveyors.


I came across the above two diagrams again as the #1 blast furnace at US Steel Duquesne Works.
Posted by Dennis DeBruler at 10:51 PM