Abandoned Flyover into a Building?

My general notes on the Joliet Iron Works

While walking along the I&M Canal and Gaylord Donnely Trails to the Joliet Iron Works Historic Site, I noticed the ruins of what I assumed was a flyover ramp along the trail. 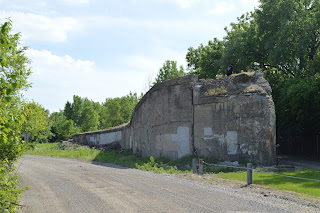 When I got to the end of the ramp, I confirmed it ended with an abutment for a bridge. The trail is on the right. This is taken from the other side of a service road. Since the bridge would be over this road as well as the CN/GM&O tracks that are to my left, I had to wonder if the service road used to be a railroad right-of-way. Some research has indicated this road used to contain a Santa Fe branch, but that is a topic for another day. 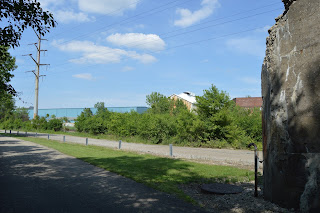 I went back to the trail to get this view to show that the other side of the flyover is now gone.
On my way back to the car I got up on the ramp to take some pictures. I don't know why there would be such big steel beams in the ramp's fill.

One normally has flyovers where two different railroads cross. For example the recently constructed connector between the IHB and  UP/C&NW. But this flyover does not make sense since switch leads to industries to the east of the GM&O would simply leave the GM&O from their eastern track. To try to determine what was on the east side of the flyover, I accessed a 1939 aerial photo. The flyover on the north end of this photo excerpt makes sense because it appears to be part of a connection between the Sante Fe tracks near the river and the industries on the east. But the flyover ramp I saw seems to be going to a building rather than to another ramp! Below is an excerpt at screen resolution.

Because of the shadows, you can clearly see where the truss bridge was. Tt appears the flyover has an interesting "kink" and is indeed going to a building. Why would a building want train service to its second story considering the expense of a ramp and bridge? Does the building contain gravity fed storage bins? Also note the rail car parked south of the bridge does imply that the current service road used to be another railroad right-of-way.

This past week I discovered a source of historic 1:62500 topo maps. This is an excerpt at 400%. It does indicate that the northern flyover is an industrial lead that starts with the Santa Fe in the lower-left corner. And it seems to agree that the southern flyover goes to a building, although it appears that the person who drew the building was also confused as to exactly what the layout was. The topo map also illustrates that the switch leads to the industrial buildings normally do originate at grade level from the east track. Comparing this topo map with the above aerial photo shows that a lot of the 1923 buildings were torn down by 1939.

To get another view of the flyover and connecting building, I accessed a 1924 Sanborn Fire Insurance Map. Back then Columbia went straight through between Chicago and Collins Street. Furthermore, Collins Street is the one labeled IL-171 on the Google Map. Unfortunately, the Sanborn Map labels the area surrounded by Columbia Street, Collins Street, the penitentiary, and the river+canal as "United State Steel Corporation (Admission Refused)." So this map does not help understand the destination of the flyover.

I did walk up to the clearing in the tree line and take pictures of the buildings to the east and southeast because they looked old. 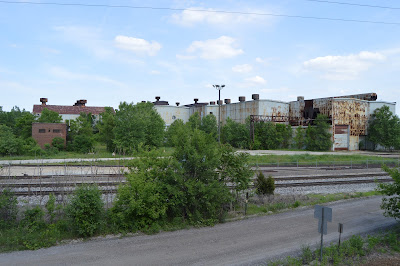 I took another shot of the buildings to the southeast from on top of the flyover ramp. Comparing the above aerial photo with the above photo, I think the buildings to the west, even though they look rather old, were built since 1939. Looking at the Bing Map (below), I think the north building of the current complex is the south building of the 1939 complex. Note all of the round roof vents. These buildings might have had some rather nasty emissions during their prime time. The modern looking buildings further south of these buildings are for the Gateway Company. Maybe some day I'll stop in and ask if they also own the old buildings that are further north. I notice one of the functions listed by the Gateway Company is "warehousing." So maybe that is what they use some of of the old buildings for.

Update: This 1904 map also indicates the flyover went into a building.

Update:
This is an earlier version of the flyover. Given the ruins, the replaced the steel trestle with an earthen embankment that uses concrete retaining walls.

Posted by Dennis DeBruler at 2:19 PM