Canadian National now owns the Elgin, Joliet & Eastern Railroad. The railroad crosses the Chicago Sanitary and Ship Canal and the Des Plaines River just north of where these two channels converge. The lift span is over the canal. The bridge is surrounded by industry, so the best I could do were some telephoto pictures from North Bluff Road.

This is a closeup of the boat in the above photo. This boat was unusual because it was a tugboat instead of a towboat. That is, it had a round front instead of a "square" front. I don't remember seeing a tugboat on the river before. It had to wait for the train to clear the bridge before it could proceed upstream
I chased a large tow from Jackson Street Bridge to this lift bridge. This is the first time I have seen a "helper" towboat lashed to the front as part of the tow.

By the time I finished taking video of the Cass Street Bridge and got back to this bridge, it was already in the "up" position. You can see the prop wash for both props, so you know the towboat is pushing hard. But, of course, it is still moving rather slowly.

I was set up with a telephoto lens and a tripod to take a video of the bridge going back down when an eastbound BNSF/Santa Fe container train went by. I was not going to risk missing the bridge by changing back to a wide-angle lens so I took a picture of each of the four engines. I include only one here because the main reason for taking four pictures is to get the numbers: 8388, 8383, 8386, and 8368. They are GE ES44C4s. When I saw the tight grouping of the numbers, I wondered if they were fresh from the factory. A Facebook posting did confirm that they were "brand new."

It turns out I had plenty of time to take those pictures, I still had to wait for the bridge to go down. While I was waiting, I caught the lead engine of a westbound BNSF/Santa Fe vehicle train. I had to stare at the bridge for a while before I decided that it was finally going down. It moved very slowly. That is why I videoed just some of its downward movement. This video has quadruple action. In addition to the bridge going down, it shows the tow continuing upstream and the tops of the eastbound containers behind the westbound vehicle train.

I took another picture after I was done with the video to verify that it was still going down.

Then I grabbed the engines of the vehicle train as it crossed the I&M Canal Bridge. It was pulled by BNSF 6992: ES44C4 built in 2012 and 4462: C44-9W built in 1998.
Then another picture of the bridge to confirm it was finally in the "down" position. In the following "overview" picture from North Bluff Road, you can barely see the lift bridge in the far background. 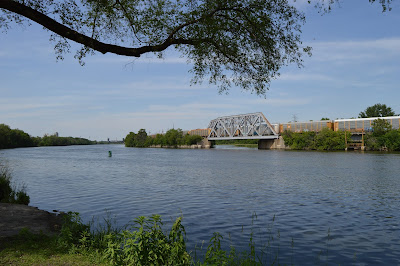 
EJ&E Ry crossing the Bridge that spans the Chicago Sanitary & Ship Canal just below Lockport (IL) Lock. This Train was returning from Morris, IL where the "J" served a Chemical Plant, and was heading for the North end of the Joliet (IL) Yard. Late Afternoon in the Autumn. I used Fuji Velvia a 50 Speed Highly Saturated Film.


Given Sturart's information, I augmented the title and added the wwSS label. I left the wwDPR label because the stretch along the Santa Fe Yard looks like it is the Des Plaines River. I guess it is the CS&SC because they had to do a lot of dredging of the river to handle the flow needed to dilute the reversed Chicago River. (An interesting tidbit is that the channel between the Lockport Lock and Lake Michigan is 12 feet deep. [Mississippi River-Illinois Waterway 12 Foot Channel Study])

Fortunately, I recently saw a map that labeled this bridge as #198 so I recognized the subject of Dillon Harrison's posted comment:


In a discussion today, The subject of Bridge 198 came up. With 198 being an obvious bottleneck on the railroad for the CN, Was there ever talk of double tracking the bridge post-buyout? Any reasons why it never was double tracked even though it was built as a 2 track bridge?

Frank DeVries The weight is not a problem. The "Second Approach span" is (was) currently sitting on the non existent track side of the lift span. At least it was when I left. Bridge 198 worked very well when I was there. Of course the C&S department employees did a great job keeping up with the electrical and the J B&B department did a great job maintaining it. Bridge 552 (old one) was my PITA bridge of the 5 movable bridges.
Randy Brouwer Never been the same since Langley hammered it lol
George Ewing You mean when he seated it manually.
Michael Bachmann Seated it manually? When I got the call that cold November night that the engineer felt a bump while entering the lift span of the bridge. Bump hell, it had to be a big bang. Broke a carryover casting, skewed the bridge north and south as well as upstream and downstream. Wheels flange was riding on top of rail for about 20 feet, lucky they fell back into gauge. Bent the snowplow severely on engine. My crew spent that whole night and most of next day making repairs. What happened to "permission by the red signal checking route as you go".
Harold J. Krewer The Army Corps of Engineers paid for Bridge 198 as part of the Illinois Waterway project. Naturally the "J" specified it be built to accommodate a second main track, just as most, if not all the highway overpasses were constructed (e.g., I-88 and Butterfield Road).
For many years the track material (rail, ties) for the second main was left lying on the bridge deck in order to keep the lift span properly balanced.

Stuart Pearson posted an interior view of the bridge

Posted by Dennis DeBruler at 3:51 AM