In the following photo taken from Ruby Street Bridge I noticed that the Jefferson Street Bridge is up and that the Cass Street Bridge is going up. The CSX/Rock Island Bridge is normally up, so it does not indicate that a tow is coming upstream. When I saw that a tow was going upstream, I trotted back to my car and went to this bridge. But by the time I got there, it was already in the raised position. I did take a video of the rear of the 12-barge tow going under the bridge. 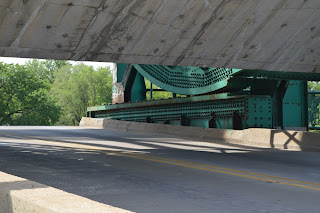 I was able to get a close up of the roller girder and the weight in the "up" position. Below is a video of the bridge going down.

Posted by Dennis DeBruler at 10:35 PM