So far I have made two trips to Ping Tom Memorial Park to take pictures of some bridges over the South Branch of the Chicago River including the Canal Street RR Bridge. I spent quite a bit of time in the park taking various angles of various bridges so I did see some trains, including a 3-engine, 87-car mixed freight CN train. I saw two Fallen Flags --- a Rio Grande covered hopper and a SOU boxcar. I also saw quite a few "L" trains because the Orange Line goes over the park and the Red Line goes over the parking lot. I learned that if I want to take pictures of trains on the bridge, I should do it in the morning so the sun is shining on the train. Unfortunately, I'm not a morning person. But I'm more interested in the information of what is running than the picture itself. I was able to extract that information.

The first train was an Amtrak. It had three Superliner cars and an engine on both ends. I learned that all trains go sloooowly over this bridge. I have also learned that the Amtrak schedules are designed to be used by customers instead of railfans. That is, given a destination, you can find a time rather than given a time you can find a destination. My first guess was that it was going to Michigan. But those trains left at 4:00 and 6:00. So then I tried the trains that use the CN+UP/GM&O route. Train 305 leaves at 5:15. But if I saw 305, then it left 15 minutes early and a train should never leave early in case people are cutting it close. I verified the time on my camera is accurate. So I still don't know which train I saw.

Then I saw an orange engine, which would be BNSF. I've learned that when you are taking pictures of engines on a bridge, you have to take a lot of them in case a number is blocked by a truss member. One advantage of the trains moving so slowly is that it is easy to take pictures of them. There were three engines, and the first and last were 4695 and 4551. 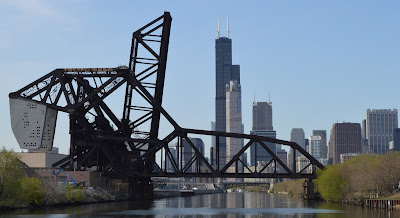 The covered hopper car is a buffer car. The train is a unit oil train probably being run through to Norfolk Southern. Given how slowly it was moving, I didn't wait for it and went north to take pictures of the two Strauss Bascule bridges. While the oil train continued, Amtrak engine 413 was doing a switching maneuver.

I took pictures of flower gardens, etc. Finally, the end of the unit oil train appeared. So it took almost 10 minutes to pass.

That made me appreciate that BNSF freight trains normally get through Downers Grove under a couple of minutes.

I by no means took pictures of every El train I heard, but I thought this one with the flowers and spring trees was worth taking. The people are walking down the entrance to the park. You can see most of the two crossing gates that protect that walkway from the CN/GM&O tracks that run through the park. At 5:13:10 on the approach to the lift bridge, I saw another Amtrak engine doing a switching maneuver. Then I went with my daughter and her dog to visit the new Chinatown shopping area.

If you look on a calendar, you will note that May 5th is a Tuesday. This will be one of the few times you will see me taking pictures in Chicago on a weekday. I went because there was some morning sun. Not only was I-90 jammed going, I-55 was also bad coming home even though I avoided rush hour. (BTW, I-90 was also bad on May 2nd, a Saturday.) The purpose of the trip was to get pictures of the lift bridge that were not backlit. The first picture caught an Amtrak engine doing a switching maneuver.
I was surprised to see a BNSF commuter car on an inbound commuter train because BNSF's western suburban commuter service doesn't use this bridge. Its route turns west around 16th Street. So the Southwest Service evidently borrows cars from BNSF. (It would not be a Heritage Corridor train because they run just during rush hours.) The picture was taken at 10:57am, and it is scheduled to arrive at Union Station at 11:01. The first car appeared on the bridge at 10:56:52 and the engine, Metra 188, appeared at 10:57:42 pushing the train.
Even though it was rather long as far as commuter trains go, the fact that it took almost a minute to pass is another indication that all trains go slowly across this bridge.

Then an Amtrak train with engines 162 and 127 came, stopped, and went back. Because the train was long but did not have the taller Superliner cars, it was probably a long distance train that came from New York or Washington that was being turned.
While I was north of the 18th Street Bridge taking pictures of a flower garden, an inbound train arrived with engines on both ends. That is why these two pictures are "framed" by the piers of the 18th Street approach viaduct.


Then another long-distance eastern Amtrak train appeared. I believe it was also doing a turning move, but I did not confirm that it backed up because...


...a CN train was coming through! When the crossing gates bell started ringing, a bunch of kids got excited and ran away from the crossing. That is certainly better behavior than the kids who ran across the crossing.

Cedar Rapids and Iowa City Railway started as an interurban line in 1904 but grew in the 1980s by purchasing track in Iowa from the bankrupt Milwaukee Road and Rock Island Railroads. The train had 87 cars with a rather typical mix of covered hoppers, tank cars, boxcars, etc. The last car was at 11:24:28.

Soon after, a Union Pacific engine appeared on the bridge. It turned out to be just two engines running light --- 4868: SD70M built in 2002, 9454: I could not find it in The Diesel Shop. (I had four pictures of the first engine, and the digits were readable in only one of the pictures.)

Before the UP engines got off the bridge, a Norfolk Southern engine appeared --- 5187: GP38-2 built in 1976. After several seconds I discovered that it was pulling just two boxcars, CSXT and SOU. 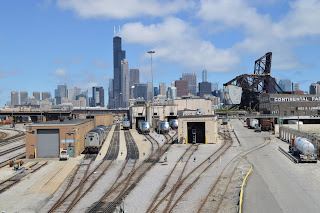 Later, when I was taking pictures of the Amtrak service facilities from the north side of the 18th Street Viaduct, I noticed the Continental Paper Grading Company still uses rail service. I wonder if that is where the above boxcars were from. 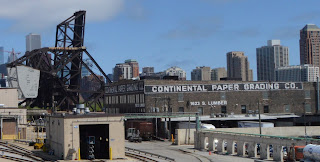 The last train of the day was worthy of its own post --- turning an Amtrak train.

Update: The NKP 765 came to town to run excursions on the old Rock Island line from Joliet to La Salle Street Station.

Posted by Dennis DeBruler at 1:51 AM