(IDOT: simple detailed, John Weeks III, Bridge Hunter, Historic Bridges) This early 1960s cantilever Warren through truss bridge is 2292' long and goes bluff-to-bluff. It has a long span of 477' to provide a navigation clearance of 400'x44'.
Historic Bridges has a full West elevation shot that also shows a stretch of the IR/.../CB&Q/IV&N that was evidently washed out.

An aerial photo indicates that this bridge replaced a bridge that was in downtown Peru at Putnam Street. That would explain why the pubs on Water Street were close to that area. The old bridge appeared to be a swing bridge. I have not been able to find any info on it. In addition to replacing this bridge, it moved US-51 traffic from downtown La Salle and the Shippingsport Bridge. US-51 was moved to I-39 when that bridge was built. That is, US-51 was originally on what is now IL-351. Then it was moved to a new route that bypassed La Salle using this bridge. Then that route became IL-251 when US-51 was rerouted to I-39.

Fortunately for Peru, the state has continued to maintain this former US-51 route. Even though the IDOT database does not have an entry for the "Reconstructed" field, it was rehabilitated in 1992, including the replacement of the deck. It was repainted in 2009.
According to Bridge Hunter, even though construction started in 1958, it was not opened until about 1964. The Bridge Hunter site has more IDOT pictures of installing the suspended span including its storage in the Steamboat Basin of the I&M Canal until it was needed.

From the Maze Lumber parking lot, I needed three pictures to capture the east side of the bridge from bluff to bluff. 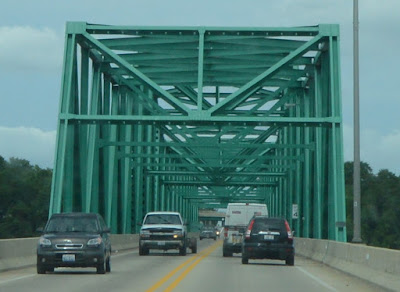 Posted by Dennis DeBruler at 4:30 AM