(Bridge Hunter, I could not find it in Historic Bridges)
When you see reference to a Kinzie Street RR Bridge, it probably is referring to the now abandoned Chicago & Northwestern RR Bridge south of Kinzie. But there was a Chicago, Milwaukee, St Paul & Pacific bridge that was even closer on the north side.

From the comments on the Flickr link in the caption we learn that it was referred to as the J-O bridge and that it was removed in 1973.

There was heavy industry and railroads along the Chicago River North Branch and on Goose Island until after World War II.

The map reminds me that "and Pacific" was not part of the corporate name in 1897. It also shows that the east side of Goose Island was a canal. That is, Goose Island is a man-made island. It was dug to increase the number of lots that had access to water-based transport.

Moving our time machine forward from 1897 to 1915, we see that a lot of rail served industry buildings had been built east of Goose Island.
The heavy industry served by the Milwaukee Road continues along the track down to Kinzie Street.

Moving the time machine forward from 1915 to 1938 (aerial photo below) shows that much of the heavy industry east of the track has disappeared, but there is still industry between the track and the canal/river.

The segment of track from the C&NW tracks that crosses the river and goes to, and on, Goose Island still exists. The track between that segment and the removed bridge has been removed. The railyard in the initial photo on the east bank is now occupied by the East Bank Club, a health club.
There was industry north of Goose Island as well including the Deering Works of International Harvester. The Deering Works was served by both Milwaukee and C&NW. Since the tracks on the river side connect with Milwaukee, Milwaukee served most of the buildings.

You can see part of the swing bridge in the left-center. The Merchandise Mart is in the middle of the picture.

From yet another posting of the picture at the top comes the comment:


Mitchell Brown I remember reading a statistic - in 1950, the USA accounted for fully 50% of the world's GDP, while Chicago accounted for around 33% of the USA's GDP.


In the background of this photo, it looks like the bridge has swung open. 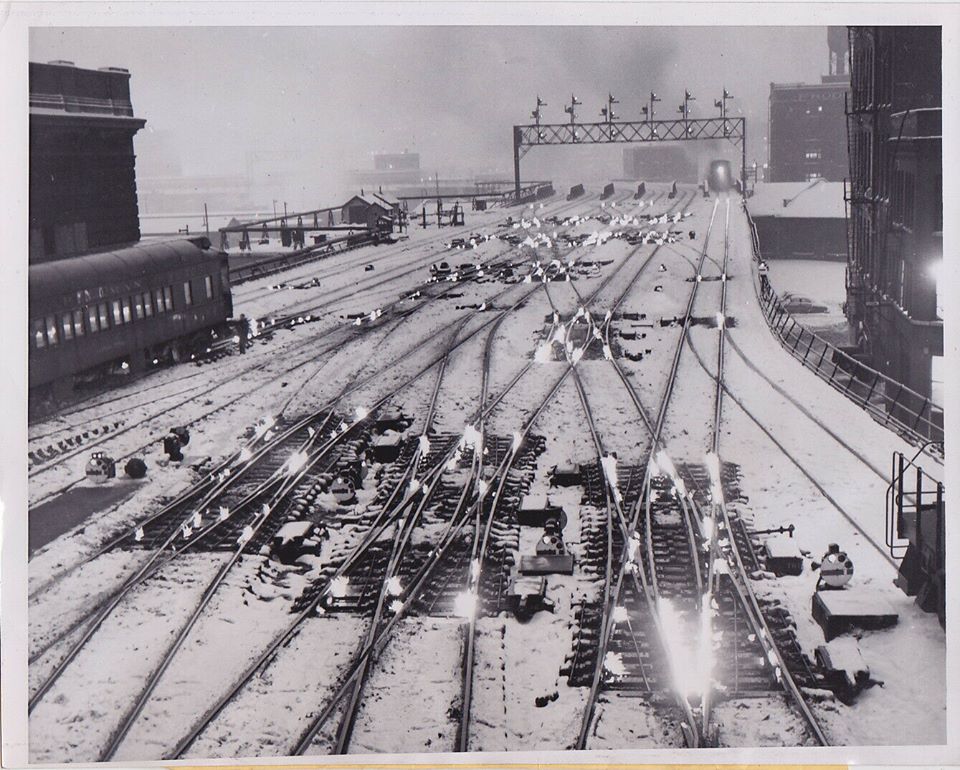 Posted by Dennis DeBruler at 12:57 AM