When I first arrived at Fort Massac State Park to get west elevation pictures of the I-24 Bridge over the Ohio River, there was a tow going under the north arch. Even at this distance you can see big prop-washes for the twin screws. The towboat is having to use quite a bit of horsepower to shove the tow upstream.

I took a sequence of pictures because electrons are cheap and to capture a sense of how slowly it was moving.
Later, a construction barge was coming upstream. I waited so I could take a profile picture. As the time stamps indicate, it took a couple of minutes to move a few hundred feet.


As I was leaving, I took another picture upstream. The following are from that picture.

The tow we initially saw under the bridge seems to have stopped for now. I didn't think Lock and Dam #52 was still being used. It seems they are doing construction there. Maybe I-24 is not the only congestion because of construction. (Update: I was wrong. Lock and Dam #52 has evidently not been retired and they were using the lock during this visit.)

Under the bridge is a medium sized tow heading downstream. So tows in both directions are using the north channel.

And the construction barge is making good progress towards the bridge. 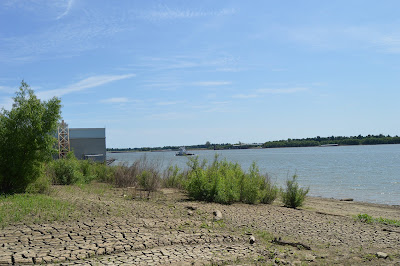 While I was taking pictures of the Metropolis Railroad Bridge, I saw that there were probably a lot of local river businesses because I saw a smallish towboat going upstream "light." That is, it was not pushing any barges. (The building on the left is the back of Harrah's Casino in Metropolis.) It would help breakup the big tows and deliver barges to their final destinations. And to build bigger tows by fetching barges from various area businesses.

Later when we crossed the Blue Hummer Bridge, my wife took some downstream pictures. She caught a 15-barge tow heading under the bridge. I analyzed the first tow I saw, and I think this is a different upstream tow.

Posted by Dennis DeBruler at 3:13 PM

Email ThisBlogThis!Share to TwitterShare to FacebookShare to Pinterest
Labels: wwOhio