These notes concentrate on the building of the new bridge with emphasis on the cranes used to build it. See Champlian Bridges for general information on the old and new bridges at Montreal, QC. The Manitowoc M1200R notes have more images of the 900- and 1433- ton M1200R cranes working on this bridge. At the end of these notes are some videos that show the progress of the construction.
(Update: RoadTraffic-Technology article)

Andre Mylocopos posted three photos with the comment: "A few M1200 pics I forgot I had. The multicoloured unit is the 1433 ton. You can see the 882 ton in the rear."

Mammoet posted three photos with the comment:
After more than 60 years as part of the Montreal landscape, the main span of the original Champlain Bridge has been dismantled. The span measures 118 meters long and weighs 2,200 tons. Mammoet utilized six stand jacks to safely lower the suspended main span, from 33 meters height, onto a barge in the middle of the Seaway.
Such a scope of work had never been done before on this scale in Canada, especially amidst wintery conditions. Congrats to Nouvel Horizon Saint-Laurent and Ponts Jacques Cartier + Champlain Bridges for achieving this milestone.
To view more about the recent scope, check out: https://mmoet.me/3fkxbv7
To learn more about Mammoet's civil related works, check out https://mmoet.me/3dCVaVt 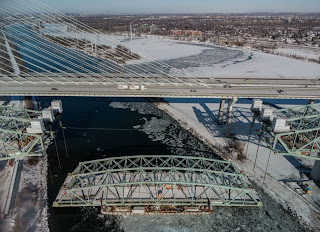 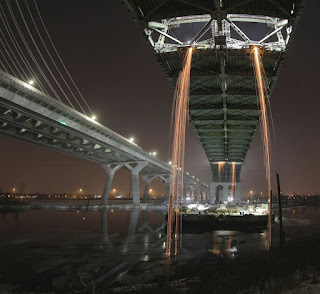 Looking at the water at the piers in these videos, it appears that the river has a strong flow. And I bet that river is no stranger to ice.
(new window)


(new window)  He caught a segment being raised to the cable stay deck in this one.


3:06 YouTube video for removing the old approach spans
Posted by Dennis DeBruler at 7:44 AM