<update>
NS Ties & Surfacing Gang #8  I was surprised how different their equipment looks. I could not identify the function of most of the units.  In the video, the equipment starts going up the ramp at 8:40.
The first of a set of videos showing NS equipment in action
</update>

I normally don't drive through downtown Downers Grove. But I needed to go to Lemont to get some pier shots of the high bridge, and going down Main Street, which becomes Lemont Road is the best way to get there. One advantage of going through downtown with my camera in the car is that it means that the crossing gates won't go down :-). That is, when you want a train, you won't get one. But as I crossed the tracks, I saw headlights in both directions. Since the right turn lane was open, I switched lanes, turned right, went into the parking lot south of the tracks, and found a spot to park. But when I got to the tracks, this is what I saw---a vision test. Looking West and then East, each with a digitally zoomed view as well. 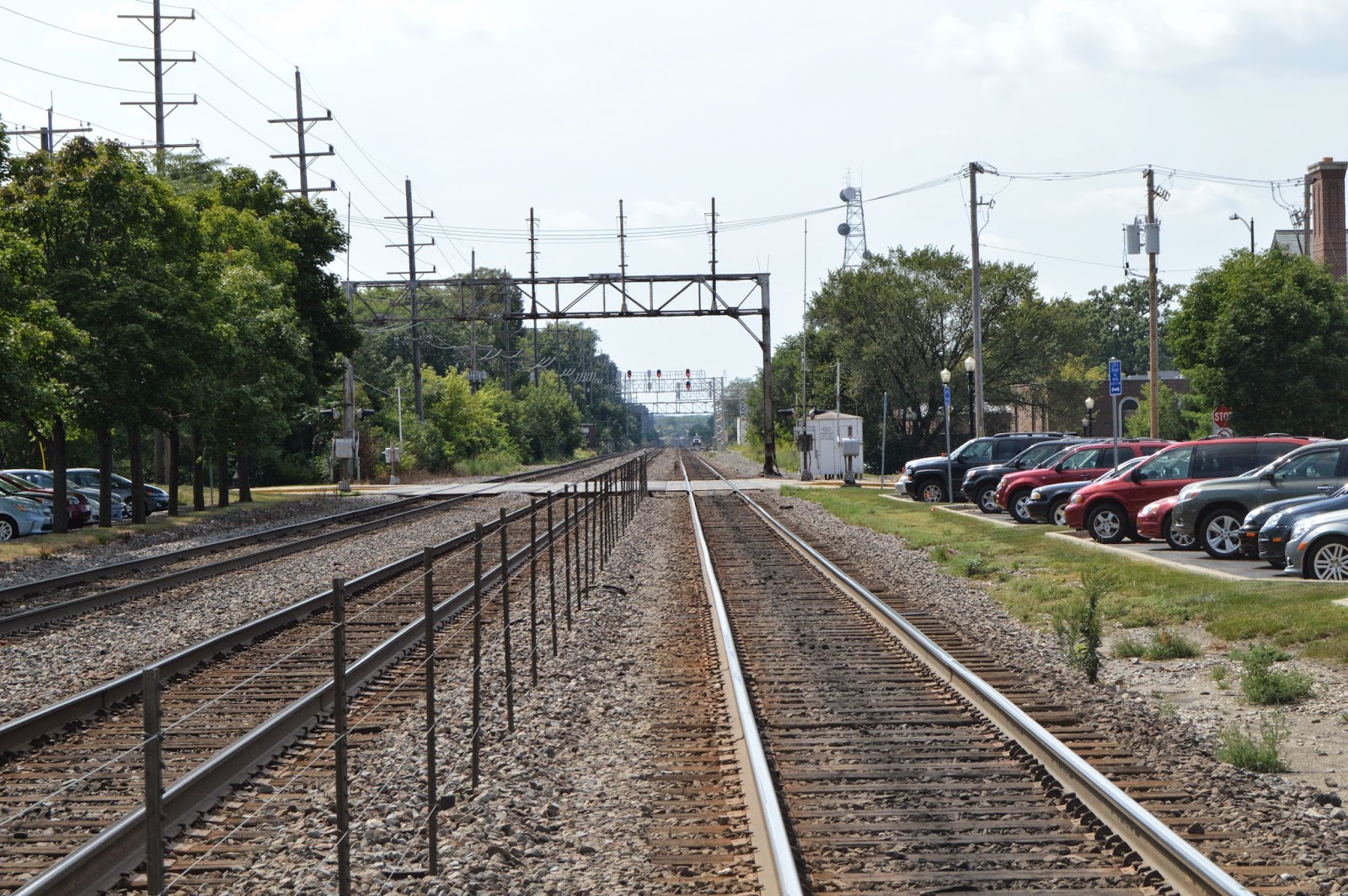 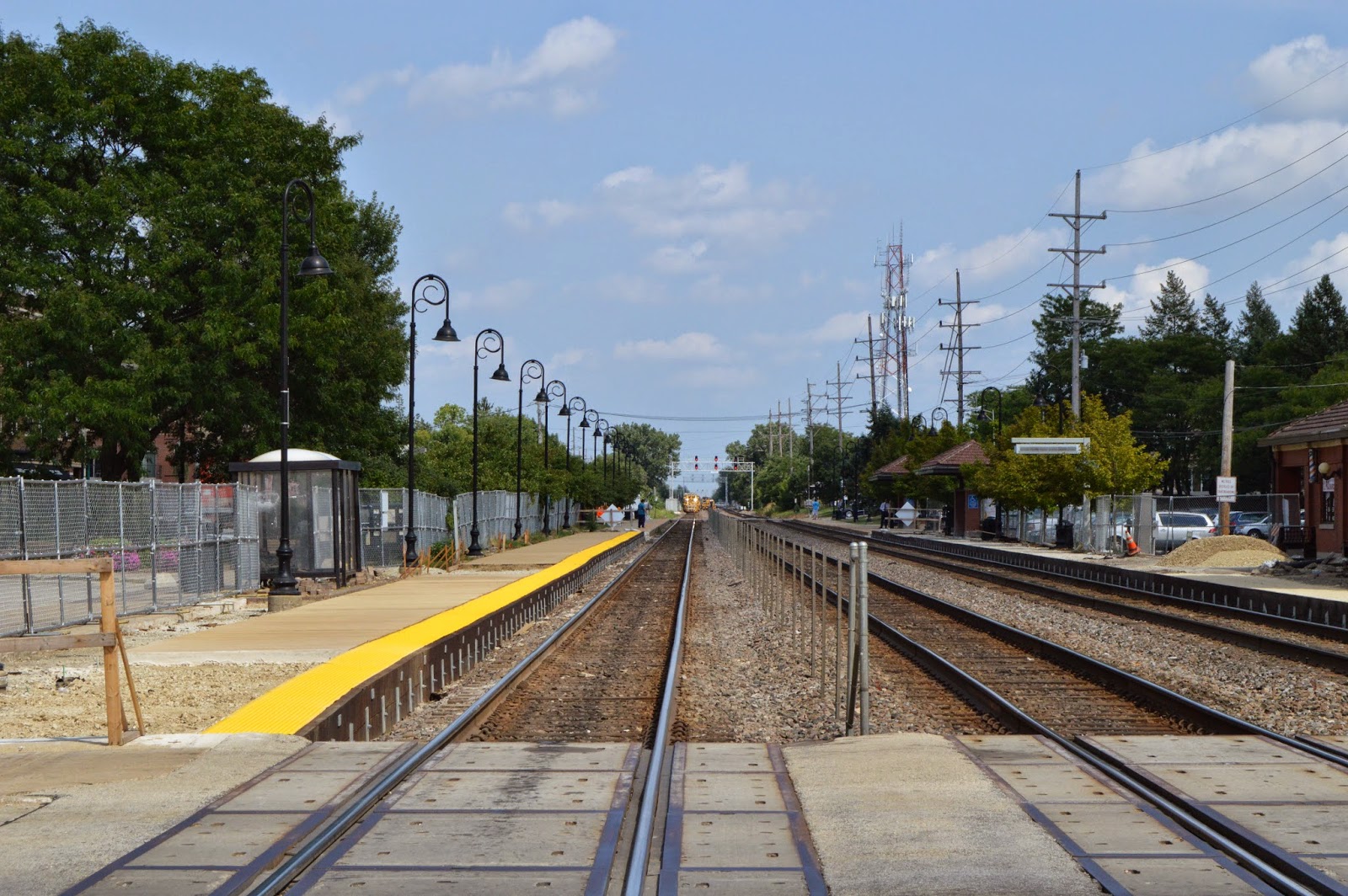 The headlights to the West are a truck setting in the yard. The headlights to the East is track maintenance equipment, so it is not a train that will be arriving soon. Or so I thought. This equipment would explain why we have been hearing whistles lately. Downers Grove is a quiet zone. But they do blow the horn when there is active construction in progress. I had thought it was for the platform work at the station. Now I understand the "whistles" are for track work. I stuck around a little to take pictures of the progress (or lack there of) of the platform work. I'm glad I did because then I realized that the work equipment was moving.

That explains what is happening in the zoomed version of the East shot---the units were on Main 2 and they took the crossover to get to Main1 so that it could enter the spur at the yard. I got some pretty good shots as the units paraded past me. They don't go very fast. 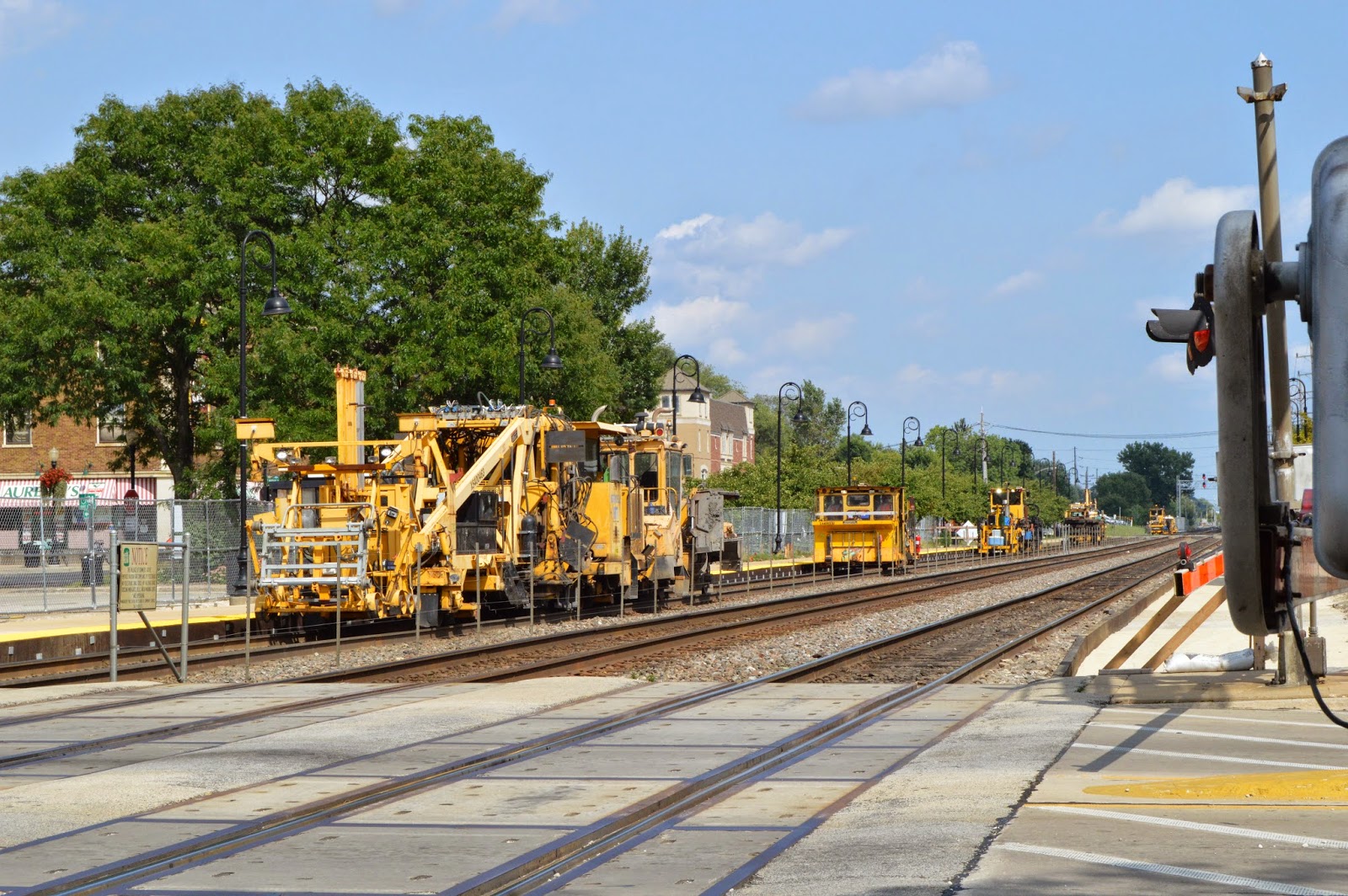 I think the units are going "backwards" to the yard. That is, they are crossing my sight in the reverse order that they would work the track. So let me start with the "going away" view so that we see them in the correct order, and then I'll include the pictures in reverse order.

The first unit has a rather big engine and some serious hydraulic equipment (blue tank, oil cooler on top of it, valves and hoses) so it is more than just an inspector/foreman car.  My guess is that the gizmo in the middle cuts the old ties into pieces. (I'm really glad they don't use a chain-link fence to keep people from crossing the tracks so these Main 1 pictures are decent from the sunny side of the tracks. But now I wonder if some kids would try to fit between the wires.) 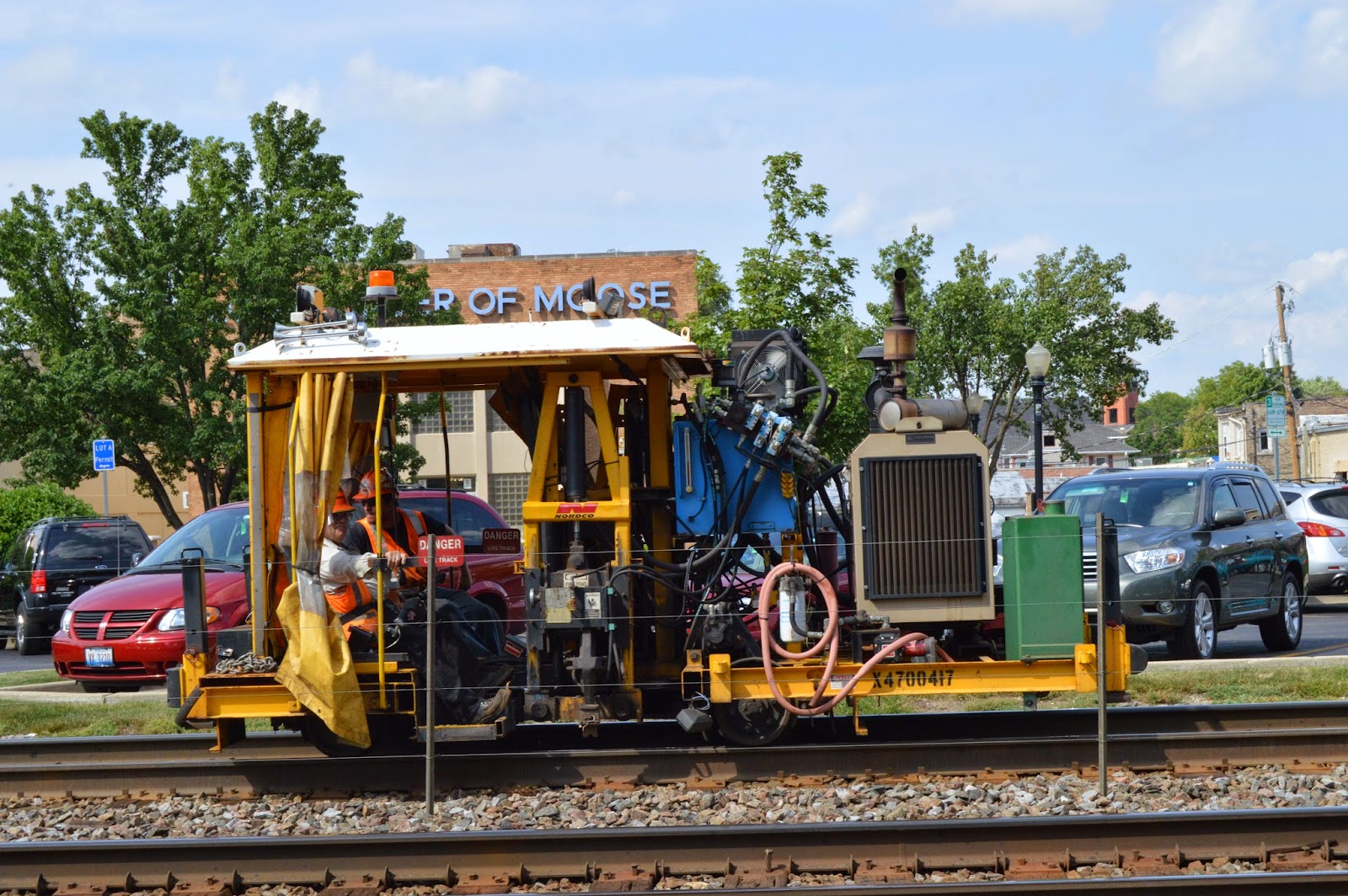 And I'm speculating that the unit below pulls out the pieces. 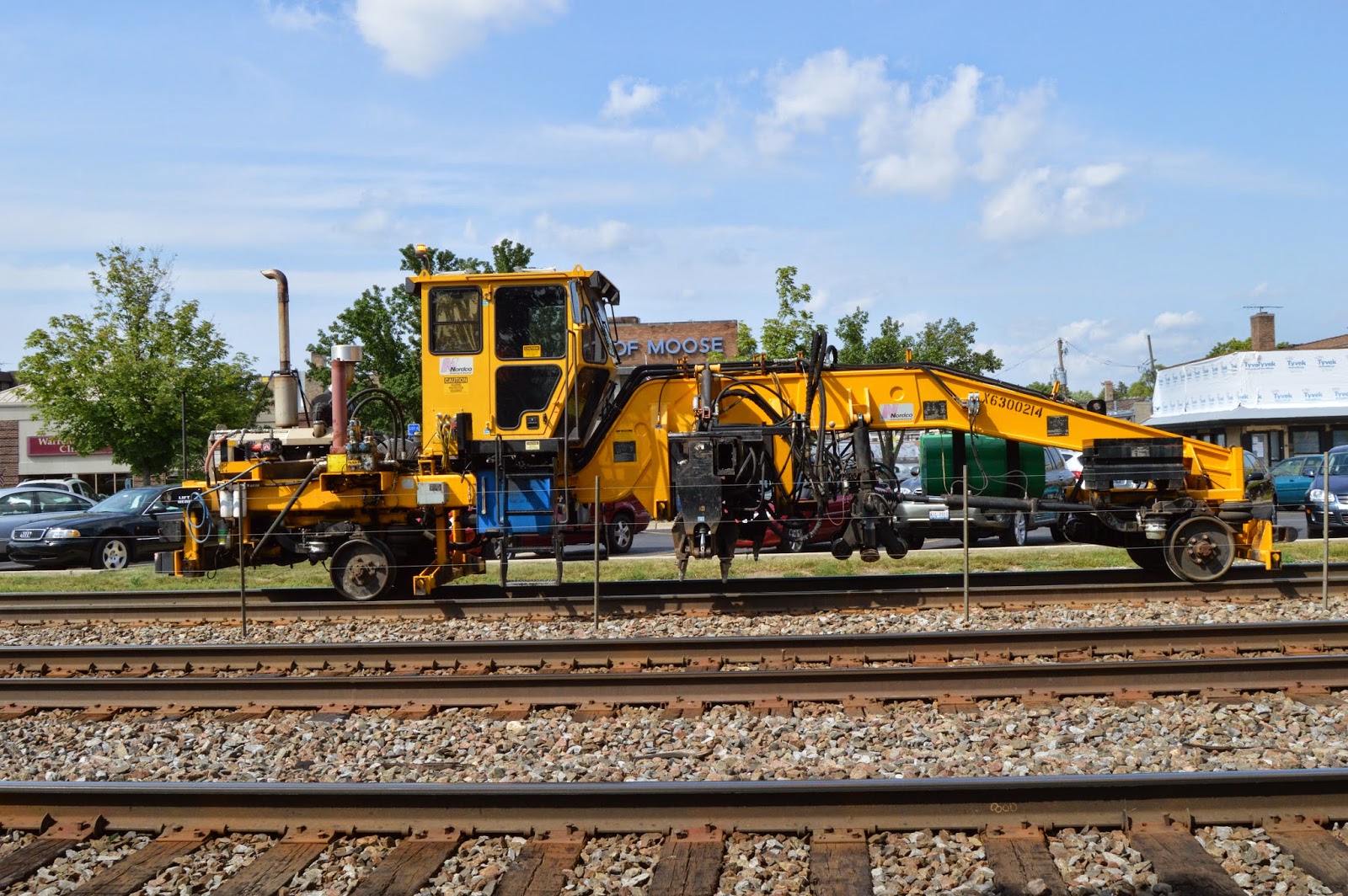 This one is easy, it lays the new ties down along the track. 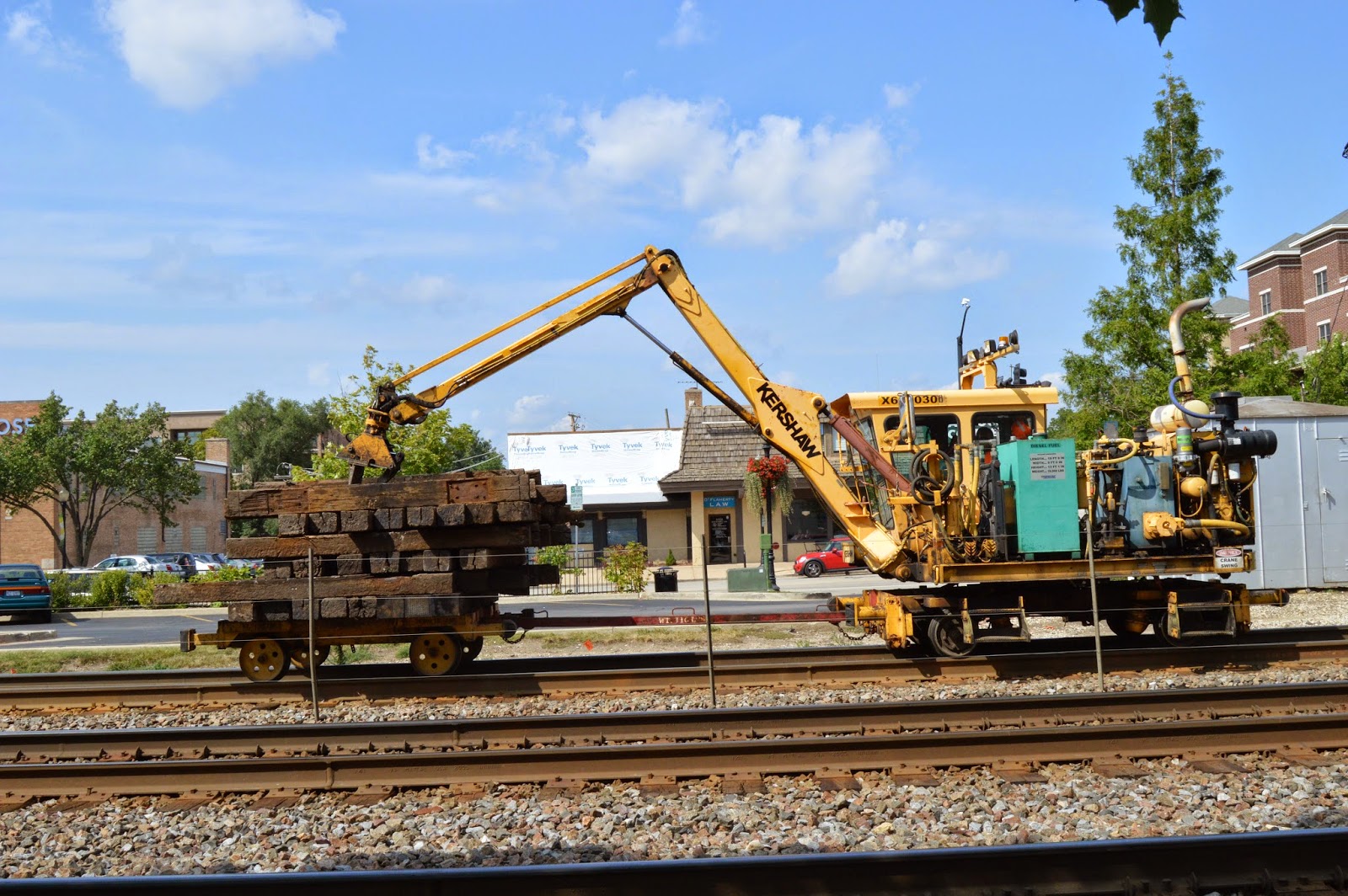 So this must be what shoves the new tie into place. 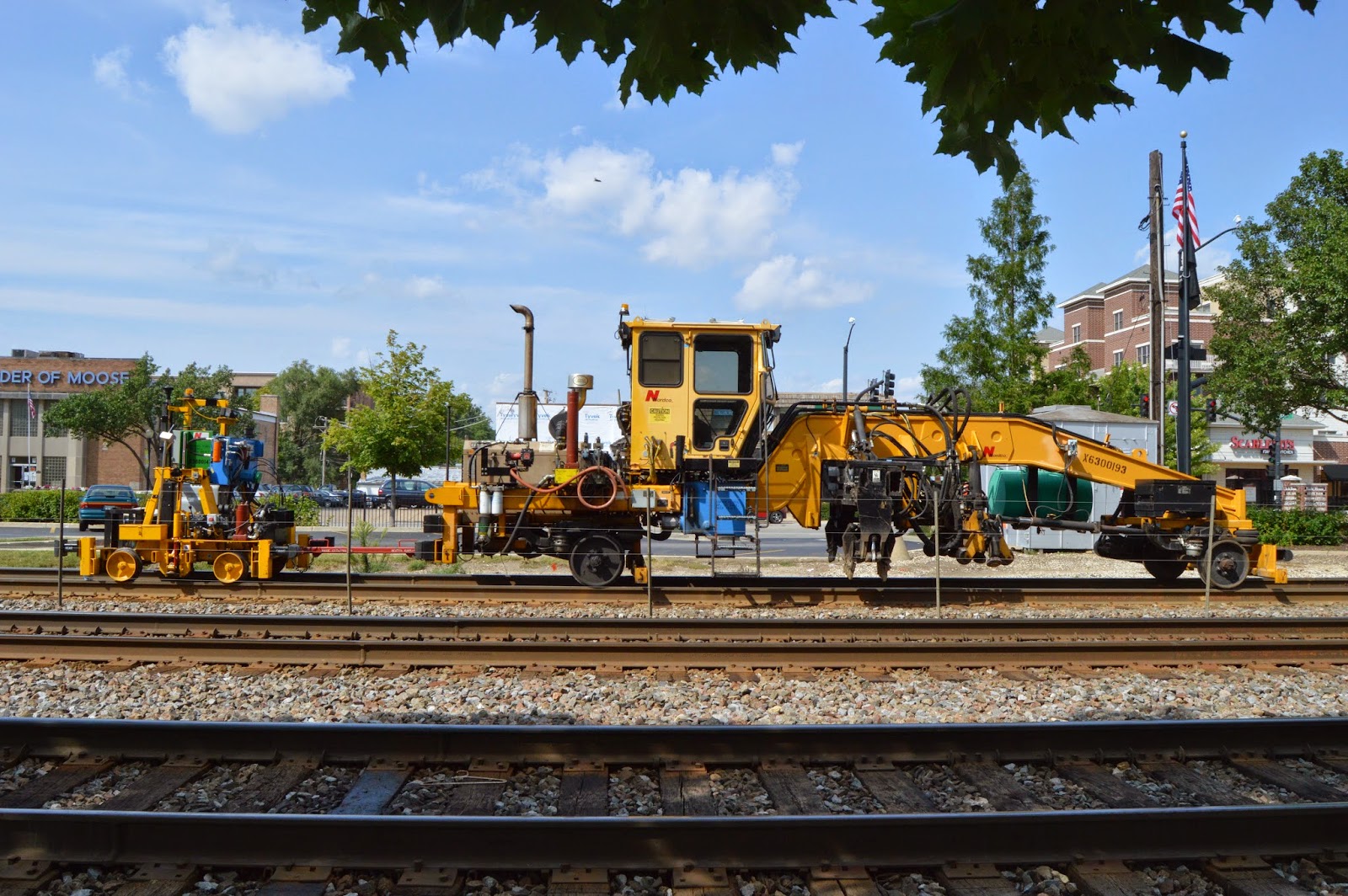 Or does the above unit place the tie and the below unit shoves the tie into place? This ballast regulator spreads and brushes-off the ballast. 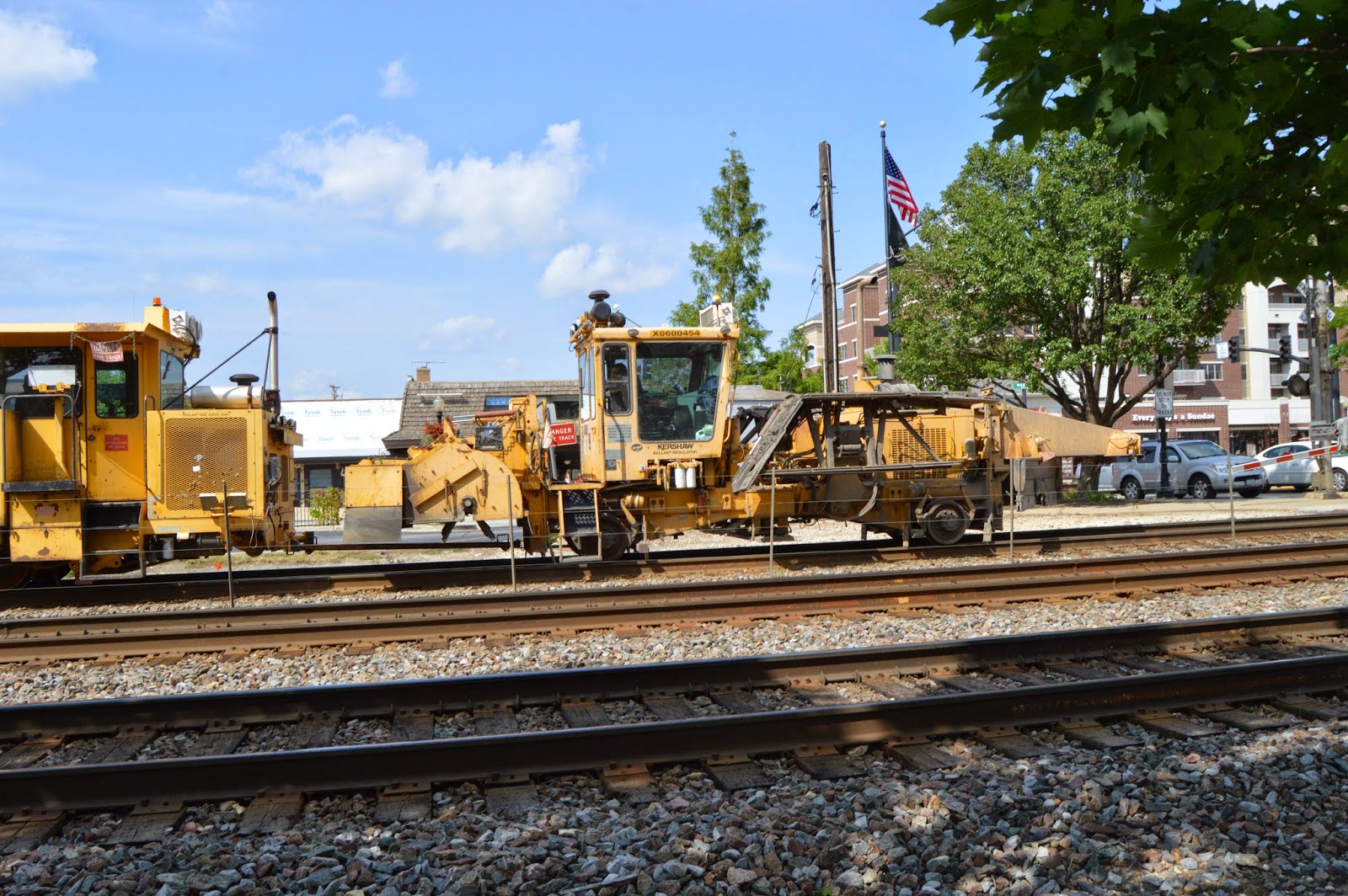 Below is the ballast tamper that the above unit is connected to.

This unit would stuff ballast under ties until the track was level with those prongs near the cab. The levers with little wheels on the left would have all of the levers flat so that the wheels would be stretched out along the track when it is operating to help determine where the plane of the track should be. I assume the "robot eyes" in the upper-left corner of the picture is a laser beam target.

Since I could not get the entire unit in the frame at 90-degrees, I took an additional 3/4 shot after it rolled by.

This lead unit had to stop when it got to Forest Avenue because the gates did not go down. Other units caught up before they got the gates down. And I also caught up with the units. (I did some trotting.) 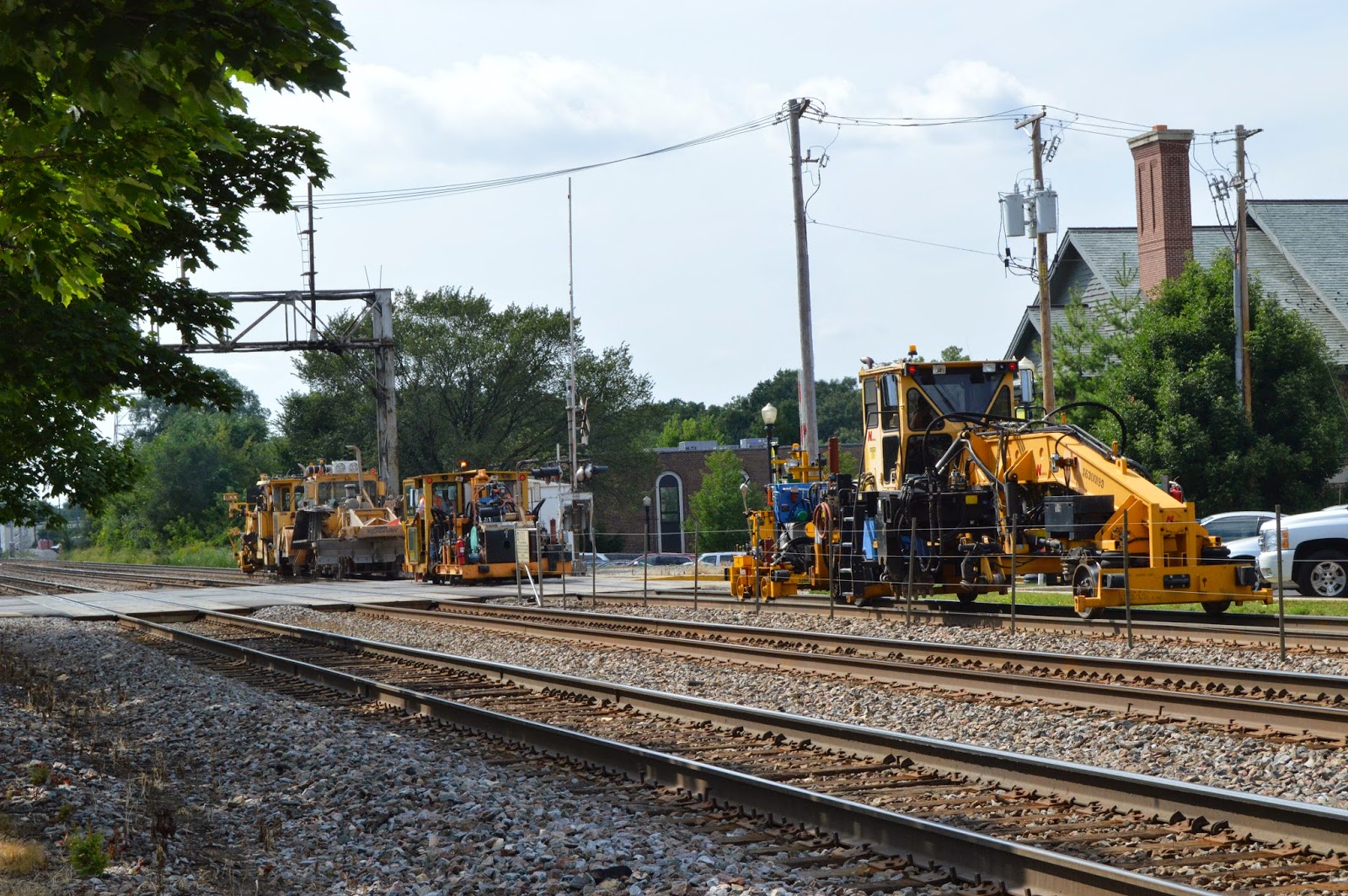 One advantage of pictures is that you see things you didn't catch "in real time". In this case I notice that the gates are still up! But then they finally went down. 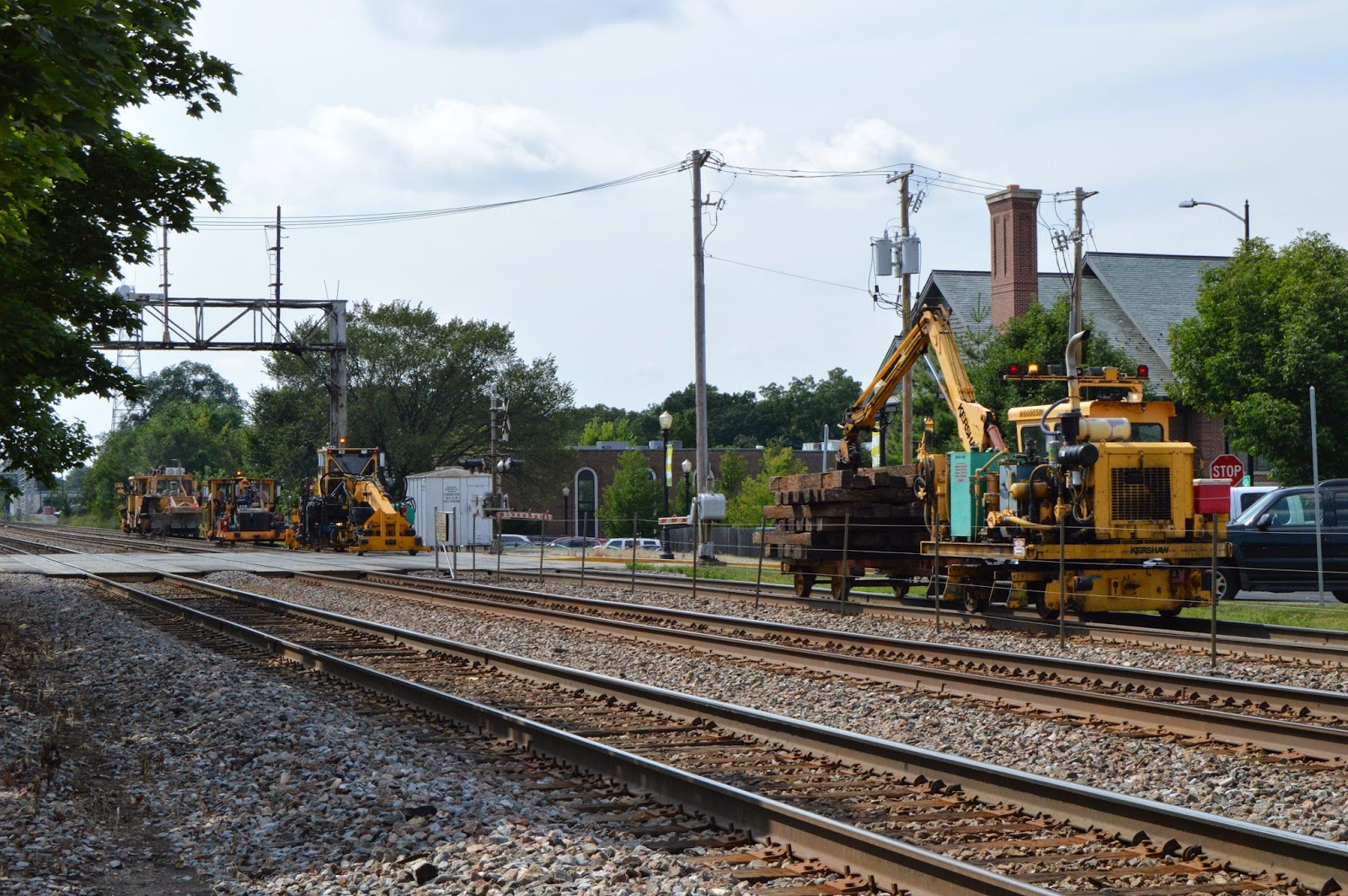 Update:
A video of a machine that shoves new ties under the tracks:

Posted by Dennis DeBruler at 10:47 PM