(Bridge Hunter; Historic Bridges; HAER; John Marvig; 3D satellite)
(Update: pictures of the west side and video links.
"South Branch Bridge" is the correct name. [posting]
Some of the pictures of the bridge and interlock railroad towers include the bridge.
A USACE clearance table for the Illinois Waterway indicates this bridge has 11.1' of clearance. The next lowest clearance in the Chicagoland area is the 8-track Bridge at 17.6'.)

These pictures were taken from the Ping Tom Memorial Park. Unless specified otherwise, facts came from the Railway Age Gazette and Engineering Record provided by Historic Bridges.

I see eight cables running between the lift span and the tower. They are attached halfway up the tower so that they are long enough to still reach the span when it is at the top of the tower.

If so, they should remove the first option from the sign. The machinery turns the windlass drums on the sides of the building (detail picture below). The machinery room contains two 300-hp electric motors which can raise the span to its maximum height of 111 feet in 45 seconds. It also has a 50-hp gasoline engine for emergency service which can lift the span in about 10 minutes. 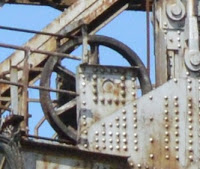 I zoomed into the top part of the north end of the span to show a deflection sheave. Two 1.125" down-haul cables go from the bottom of the tower up around the top side of the deflection sheave then over to the top of the drum. Two up-haul cables go from the top of the tower around the bottom side of the deflection sheave then over to the bottom of the drum. Note that as one pair of cables winds onto its drum, the other pair is played out. (Item 7 in MechanicalLift) All four drums on the sides of the machinery room are connected by gears to the motor so that the turning of the drums is synchronized and the length of the cables remains consistent for all four corners of the span. Note that this picture was taken before the walls of the control building were sheathed.

When I took the picture on the right, I thought I was taking a nature+technology photo. But I include it this post because it more clearly depicts the tower's trapezoidal shape than is revealed by a more traditional elevation photo. 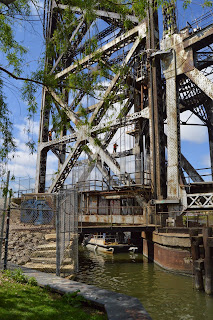 Someone was doing some work on the south tower. Note that there are men walking on both the near and far first-level horizontal members. And I believe the boat under the tower is also part of the maintenance effort. Note in the above "East Elevation of North Tower" picture and in this closeup of the south tower that the piers on the east side are of excessive width. This was so that it could support the west side of another double-track bridge if train traffic grew to justify the construction of a second bridge. 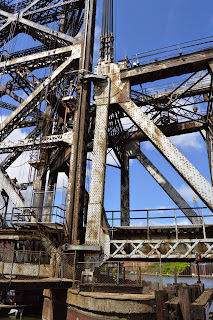 
The two maintenance workers allow you to correlate these two pictures of the south tower that I took as my "parting shots." 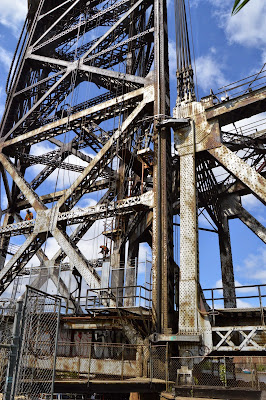 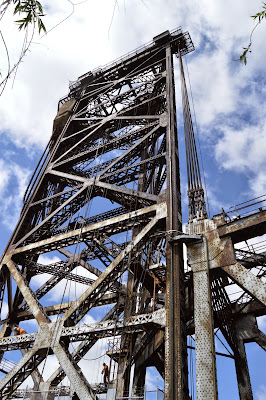 They used a climbing derrick to build the towers. After the towers were built, they built the lift span in the raised position so that shipping would not be obstructed by the construction. The 1600-ton lift span was the heaviest in the world when the bridge was constructed. As the following photos illustrate, an A-derrick was used on each side to build the false work and the span until the derricks were close enough that they could cooperate to raise the center truss members. The photos also show the swing bridge that is being replaced by this 1914 lift bridge. It was important to not drop anything during construction because over 300 trains a day used this crossing. (Item 33 in MechanicalLift)


The Government required 120' of clearance, but to align the horizontal chords of the falsework with those of the tower, the span was built at 130' of clearance. (Item 29 in MechanicalLift)

It bridge had to do over 15,000 lifts a year, but many were for just a few feet to clear tugs. (Item 34 in MechanicalLift) 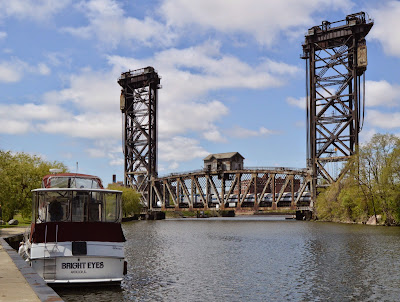 Later, when I circled back to the bridge because I heard train horns, I noticed that there was a boat parked at the dock. Looking at some other pictures I took that day, he appeared by 11:10. I asked if they were waiting for the bridge to go up. They were, but no one was answering their call on the marine radio. So I went up to 18th Street to kill time waiting for them to get a response. Unfortunately, my battery ran out at 12:03. I was kinda glad to have an excuse not to wait longer because if they had been ignored for almost an hour, who knows how much longer they would be ignored. (Update: The clearance of the bridge is 10.5 feet. Federal law prohibits opening the bridge if a train is approaching from either side and is scheduled to arrive in ten minutes or less. (The Chicago River An illustrated History and Guide to the River and Its Waterways, 2nd Edition, 2006, David M. Solzman, p.94) However, the were not enough trains crossing to justify having to wait hours.)

The towers were designed to accommodate plans to later raise the track elevation in this area by 20 to 25 feet. I'll bet these guys wished the plan to raise the tracks had been realized. They confirmed that this is the lowest bridge on the river and the only one that they can't clear.

One of the things I did on 18th street was get some portal shots of this bridge.

Others share my interest in this bridge. Mickey B. Photography has artistic and traditional portal photos. Joe Balynas also has a portal picture of note. I found a video of the bridge being raised and lowered for a sailboat migration between the harbor and the boatyards and then an Amtrak train. And I discovered that if you search Flickr with "chicago canal street bridge" you get a lot more pictures of this bridge including another video. Plus other images including an incredible wide-angle view of a sailboat migration to the boatyards on the main stem of the Chicago River.

I  end with the first picture I took when I got to the park because it captures the context of the bridge in the Springtime.


This picture was probably taken from a interlocking tower that is either gone or that I will never have access to. And trees would now block this view even if the tower was accessible. Since the view is irreplaceable, I include it even though this 1915 report does not have the resolution that we now expect for a picture.

Fred Glasper posted three photos with the comment: "Spend the day on my boat moored next to the Penn Railroad Vertical Lift Bridge in Chicago. Works good, needs painting."
James Boudreaux What hangs below the equipment room is the original operators' shanty. Since it gives a clear view of both the South Branch River and trackage north and south,the operator made the lifts there electrically.That room also had a small coal stove for heat.


Larry J. Perlman posted two photos with the comment: "Assume these sprinklers are on to reduce rail expansion at the bridge. I haven’t seen this before. Can anyone shed any light on this? (Lumber Street bridge)."
Mike Spencer
I would imagine that if the bridge gets too hot, it'll expand and lock up (if lowered) or won't seat (if being lowered).
Harold J. Krewer
That's exactly what happens....the metal expands in the heat and the bridge gets stuck. The spray is supposed to cool off the metal enough to prevent that.
Gill Welsch posted the comment:


Hi, Everyone. I had to go to Chicago for a business trip on Monday. My colleague and I got to ride Amtrak's Saluki from Carbondale.

:-) The train took a slightly different route to Union Station. Rather than crossing the Chicago River on the Saint Charles Air Line Bridge, the train passed by some lovely parks and crossed the river on the Canal Street bridge (I hope that's what it's called). When we left on Wednesday's Illini, we crossed the river on the St. Charles Air Line, which is normal.
Does any one know why we would have detoured on Monday? Mind you, I'm NOT complaining. I really enjoyed the new scenery. Also, we still arrived EARLY. I'm just curious.

Mark Rickert No detour, they use both routes, the route I want to say is ex PRR for most part at the north end and operated by the NS.
Bob Friedlander There is no connection from the IC main to the NS main that goes by Sox Park. Guess the NKP had a connector from the Pennsy by Sox Park that connected to the IC main at Grand Crossing that has been long gone. Have no idea how the Salukis trains would come down the NS main line!
Dennis DeBruler They would be using the St. Charles Air Line to the beginning of the IC branch that goes to Freeport, IL.
https://www.google.com/.../@41.8602474,-87.../data=!3m1!1e3
They go on that branch a little bit until they get to the connector that is under the Orange Line.
https://www.google.com/.../@41.8540203,-87.../data=!3m1!1e3
The lovely park would be Ping Tom Memorial Park.


Sue Sacharski posted a photo taken from a tall building.
Steve Malachinski Spent many years crossing that bridge. Running from Global one to Canal St yard.
Karl M Andrews used to be a road switcher job that was a transfer from Eola to Glenn Yard on the ICG(Former G.M&O(C & A) used that bridge.
[I replied to Harold J. Krewer that the machinery is not on top of each tower.]
Paul Musselman posted three photos:

pictures of the bridge interlocking tower have additional views of the south end of the bridge from locations that I'm sure that I cannot legally access. The south side of this bridge also shows up in the background of many pictures of the 21 Street Crossing. A few bad railfans and 9/11 have made it much more difficult to capture views of railroad facilities.

Jozef Bernatak posted seven pictures to a public Facebook group including some with the lift span up.
Four photos by Sibio (source)

Patrick McBriarty's page   The clearance of this bridge is 10 feet, 6.5' below the standard.

2006 Flickr "before sunup"
Fred Van Dorpe posted 8 photos and a nice description including "after it was built, the bridge was crossed by about 300 trains per day on its 2 tracks, and raised for river traffic about 75 times."
(Facebooked)
James Aurand posted three videos.
A video that shows they need more cameras showing what the boats are doing. When it first stopped just a little ways up, I thought they could finally see what the boats were doing. But then the bridge goes up some more even though the boats have already passed under!
4 photos
C Kent McKenzie: I’ve read someplace that it was designed to remain functional even if that line was elevated above street level, by simply working some of the cross-bracing. Fascinating!
Charlie Easton: That bridge is skewed up! The counterweights look like something off a bull! And the cables look pretty spindly for what they have to do. When they changed out the cables on the mouth of the Cuyahoga a few years ago I saw some stats on just the weight of the cables. Can't recall the number but heavy!
Dennis DeBruler: Charlie Easton Note the chains hanging from the counterweights. As the counterweights go down when the span is lifted, they lessen the weight hanging off the counterweights as the weight of the cables decrease because they become shorter.
Charlie Easton: Originally ocean going ship anchor chains.
4 photos from some new angles

Posted by Dennis DeBruler at 12:16 PM