The grain elevator in Olney, IL, has its own locomotive. R. Craig has identified it as a GP9 built in 9/1956 originally as Chesapeake & Ohio 6140 with serial number 22048. Dave Honan posted the following info from Ken Ardinger.

When I first arrived at the elevator on my Dec 11 trip, it was behind the string of cars you see on the former Illinois Central through track. Every few minutes 6140 would fire up and move its cars a few more feet. By the time I was done taking pictures of the elevator, it had become visible on the track side

The elevator not only has its own locomotive, I think it owns its own industrial spur. It uses a remnant of the PD&E route of the Illinois Central. The satellite image to the right shows the entire railroad. It is the white stripe just left of center with a siding down near the bottom next to the grain elevator.

Zooming in near the top of the railroad, we see the diamond for the original CN/IC branch that went north/south has been removed but that the interchange lead to CSXT/B&O in the southeast quadrant has been retained.

The south side of the railroad now terminates just before S. White Ave. They recently tore up the track that went across this road to Co Rd 900 N. Of Google, Bing, and MapQuest maps, Google is most accurate. It shows the track terminated near Co Rd 900 N. The other maps show it going all the way to Evansville even though most of that track was abandoned years ago. Note that the remaining track is straight and the ballast is fresh. That was true for the full length of the spur.

Even the most accurate map, Google, shows a track in the southwest quadrant of the IC/B&O intersection, but the satellite map indicates that it no longer exists.  And even though Google normally shows each of the tracks at high resolution, the map shows only one track for this spur. But most of the length of the spur int the satellite view has at least two tracks. And some of the length has three tracks. The photos I took indicate the satellite map is current.

Then I found an interactive map for CSX and zoomed in to enough detail to show sidings. But it doesn't show the spur to CGB. However, I could not find CGB listed in a list of Illinois shortlines. So I still don't know who owns this segment. As noted, whoever now owns the track has been maintaining it. On the Dec. 11 trip, I followed White Ave. north until I crossed the CSX/B&O tracks. I discovered there were a lot more modern looking covered hoppers parked along the length of the spur. More on that later. I also discovered that there were three CSXT engines on the interchange leg, so I switched to my telephoto lens so that I could take a picture of them from North Street (see below). Note that I was fighting the availability of sun during a short winter day. I could see that the number for the first unit was 5368. Fortunately, I was able to catch views of the other two units from South Street (see further below). The CSXT engines are 5368 (ES40DC), 110 (AC44AH) and 8060 (SD40-2). You could hear that at least one of the engines was idling. And while I was taking pictures, I heard an engine pump up its air. Are these engines going to idle the entire time it takes to fill up all of the hoppers? 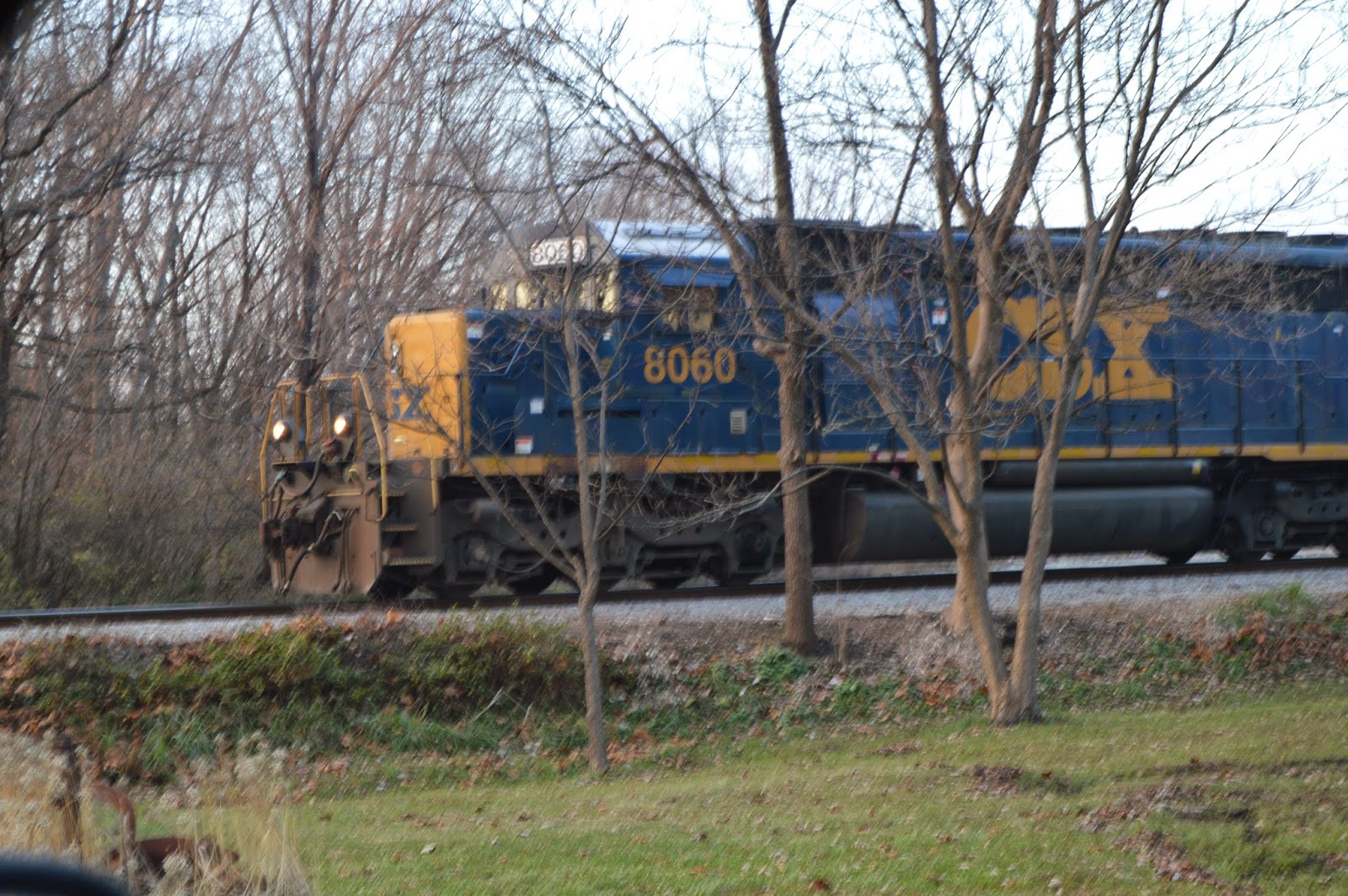 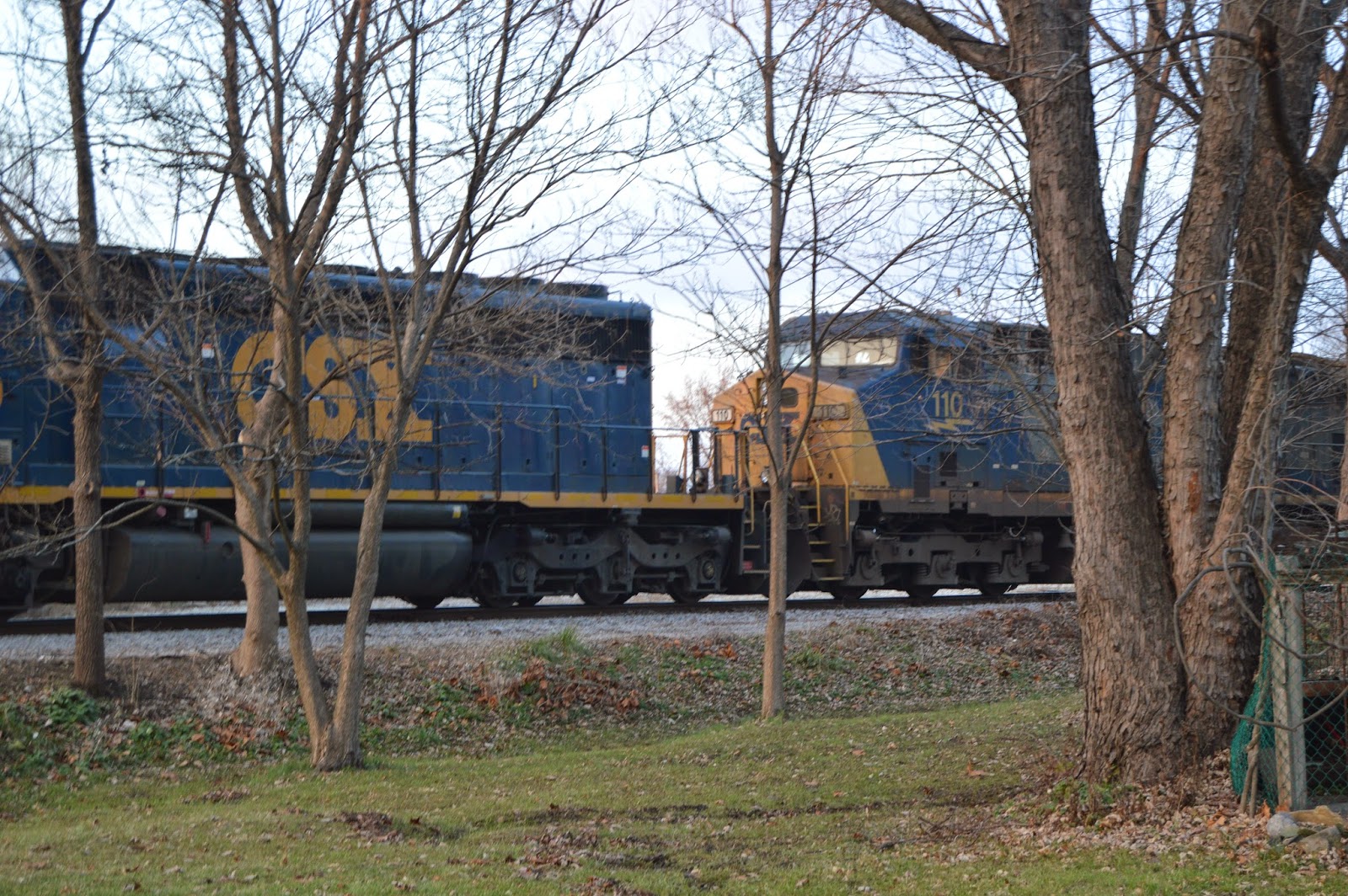 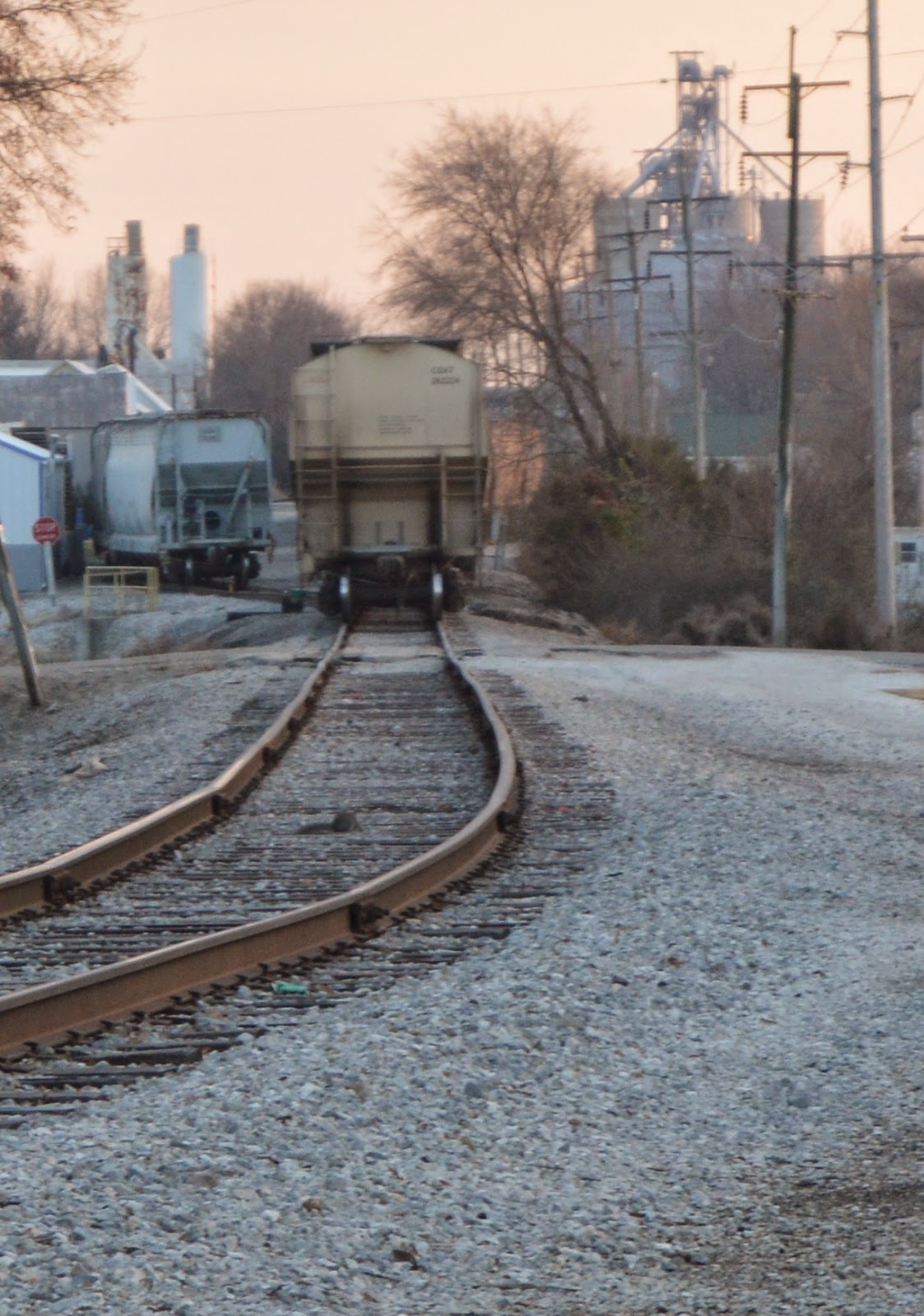 And looking south from South Street we see the top of the CGB grain elevator in the background and the northern most hoppers that were parked on the spur. 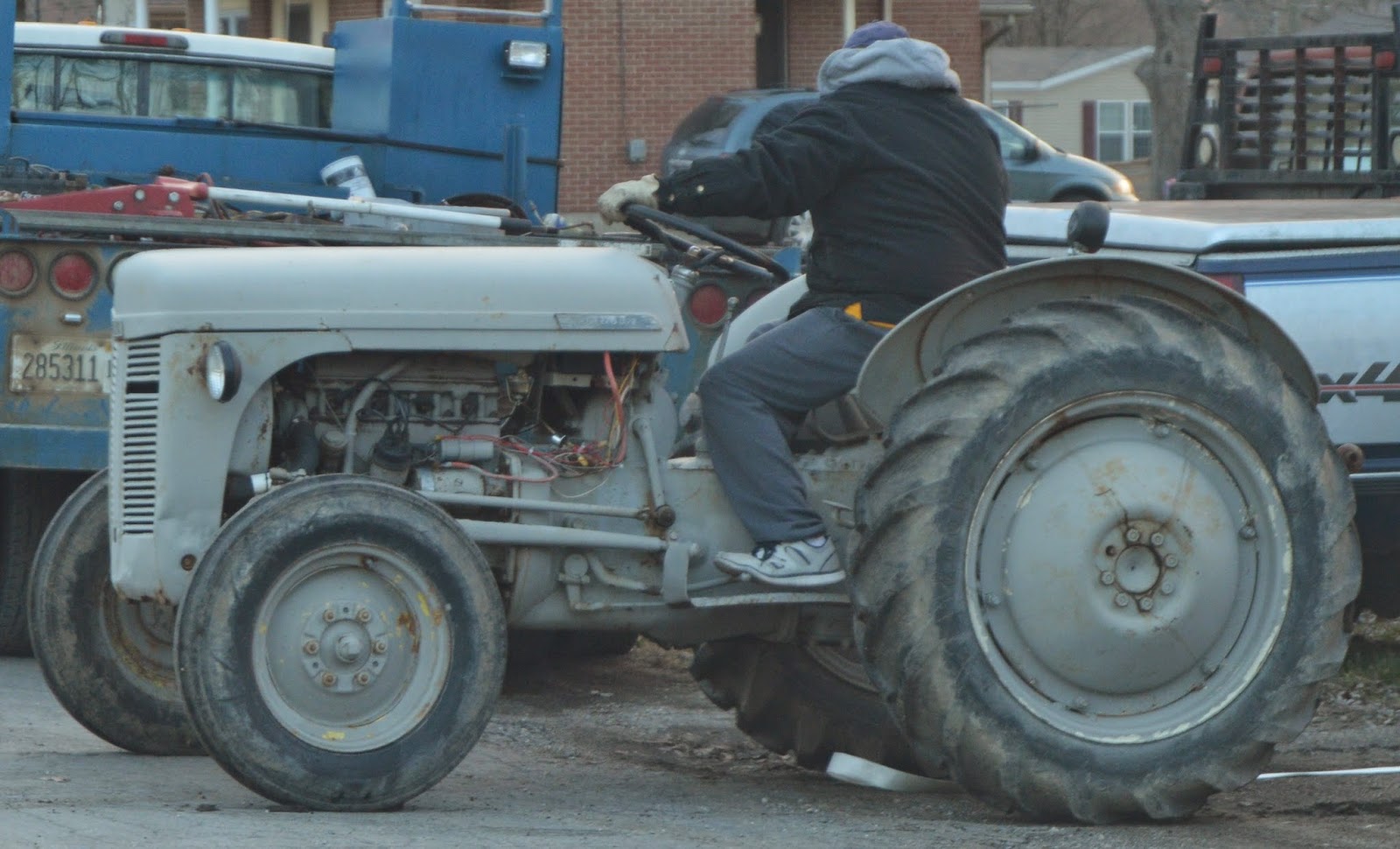 While working my way south to take pictures of the hoppers, I came across this old Ford tractor pulling another old tractor out of a garage. The name plate indicates "Ferguson."

On the east side of a trailer park, I was able to confirm that all of the hoppers were uniformly modern. Unfortunately, I did not have enough camera resolution to read the builders plate. 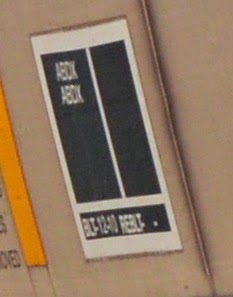 But in the view on the right made from a crossing, I did have enough resolution to determine the built info was 12-10. So December 2010? I took pictures north and south from many of the crossings.  Looking at the pictures, I could determine there were 4+5 cars south of Glenwood Street, 6+6 cars between Glenwood and the southern industrial crossing, and 3 cars between the industrial crossings. Since there are two hoppers parked in the current satellite image, I could determine that a car is about 50 feet long. By measuring the distance from the northern industrial crossing and Lafayette Street, I estimate it was storing 6+20 cars. From the following telephoto picture from Glenwood Street and the photo down by the elevator, I estimate there were 16+14 cars down by the elevator. 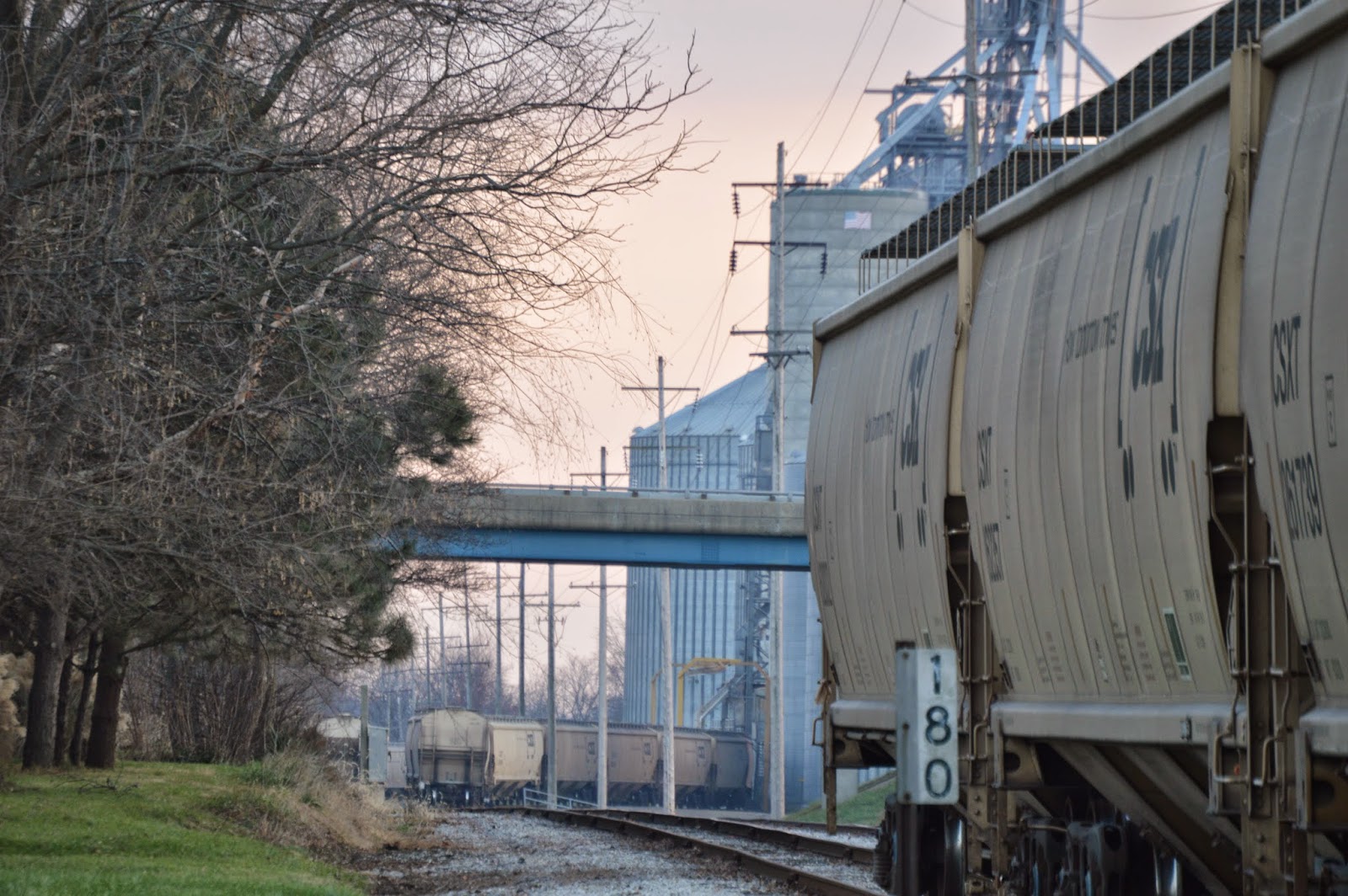 So there were about 77 CSXT hoppers in town.

There were also 9 AEX hoppers on the siding that runs east of the two main tracks.

During my Nov. 8 trip, I saw another train being loaded.
Posted by Dennis DeBruler at 11:46 PM