(Satellite)
Some call this IHB yard the State Line Yard, but that would be confusing because some also use the name State Line for the IHB Burnam Yard. But I am left with the question of where is the yard that this map labels as "State Line Yard (NS-IHB)"?

Would anyone know about operations at the IHB Calumet City aka State Line Yard. What I am wondering specifically is what is the general function of the yard, e.g. Local Customers, etc.
Also, would traffic be delivered there directly or would it have been fed from Blue Island, or elsewhere for that matter.

Ean Kahn-Treras Are you referring to N. State Line Yard just north of State Line Crossing, or the small yard west of Homan Ave crossing on the border of Hammond and Burnham?
Bob Lalich Ben Elliot - if you are referring to the IHB yard between Hohman Ave and Calumet Park, I believe NS delivers interchange there. I'm not sure if there are any carload shippers still in the immediate area. The IHB yard north of the South Shore along the state line is called Burnham Yard.
[Additional comments established that Calumet City WAS an interchange yard with NS.]
Mike Breski

Most of the cars for Calumet City industries came from Blue Island. Cars set out for interchange would go to Blue Island for classification. Ii's been a while since i worked for IHB memory a little foggy as far as what roads set out there. Yard is on Calumet City Burnham border under Burnham ave bridge about a mile south of CSSSB between Hohman and Calumet Park as Bob Lalich stated. When i worked at the Gibson West End before it became auto rack land one month NS would deliver next month we would pick up from Osborne [Yard].

The yard does still exist, and it doesn't look like it is just used for storage. So today's usage is still a mystery.

We obviously are looking under the Burnham Avenue overpass. But are we looking East or West. And why are there tracks on both sides of the mainline? That is not true in today's satellite image. So I fired up the time machine of 1939 aerials. As expected, there were a lot more tracks in this area back then. So many, that I included two excerpts: west and east of the overpass. The above view is looking westish. I put a red rectangle around the water tower and a blue rectangle around the junction tower.

What industry has that narrow building along the south side of the yard? Are they separate small buildings or skylights on a really long, skinny building? According to a comment by Bob Lalich on the following Flickr photo, they are stockyards. And that facility south of the IHB tracks and west of Burnham Ave. was the IHB Calumet Park Yard.

Since the grade separation work for S. Torrence Ave. with NS/NKP and South Shore Freight does not allow one to go south on Torrence, I took the detour down S. Brainard Ave. to Burnham Ave. I turned east on Sibley Blvd and parked at the east end of Harding Ave. From there it was a short walk to the pedestrian walk of the overpass of the IHB and BOCT tracks. I took all of my pictures from over the IHB tracks. The first picture I took was of a Pillsbury covered hopper. From a Facebook comment I received from William Brown concerning the following posting of the tops of genset engines I learned that Pillsbury discontinued their Grain Group in 1988.

(Update: Eric Gagnon explains the history of the Pillsbury car and why there are three rust spots on each side of the "u".)

I had already caught IHB 2161 near the north end of IHB's trackage. In that posting I describe gensets. Note in this picture that all three gensets are active in each of the units. 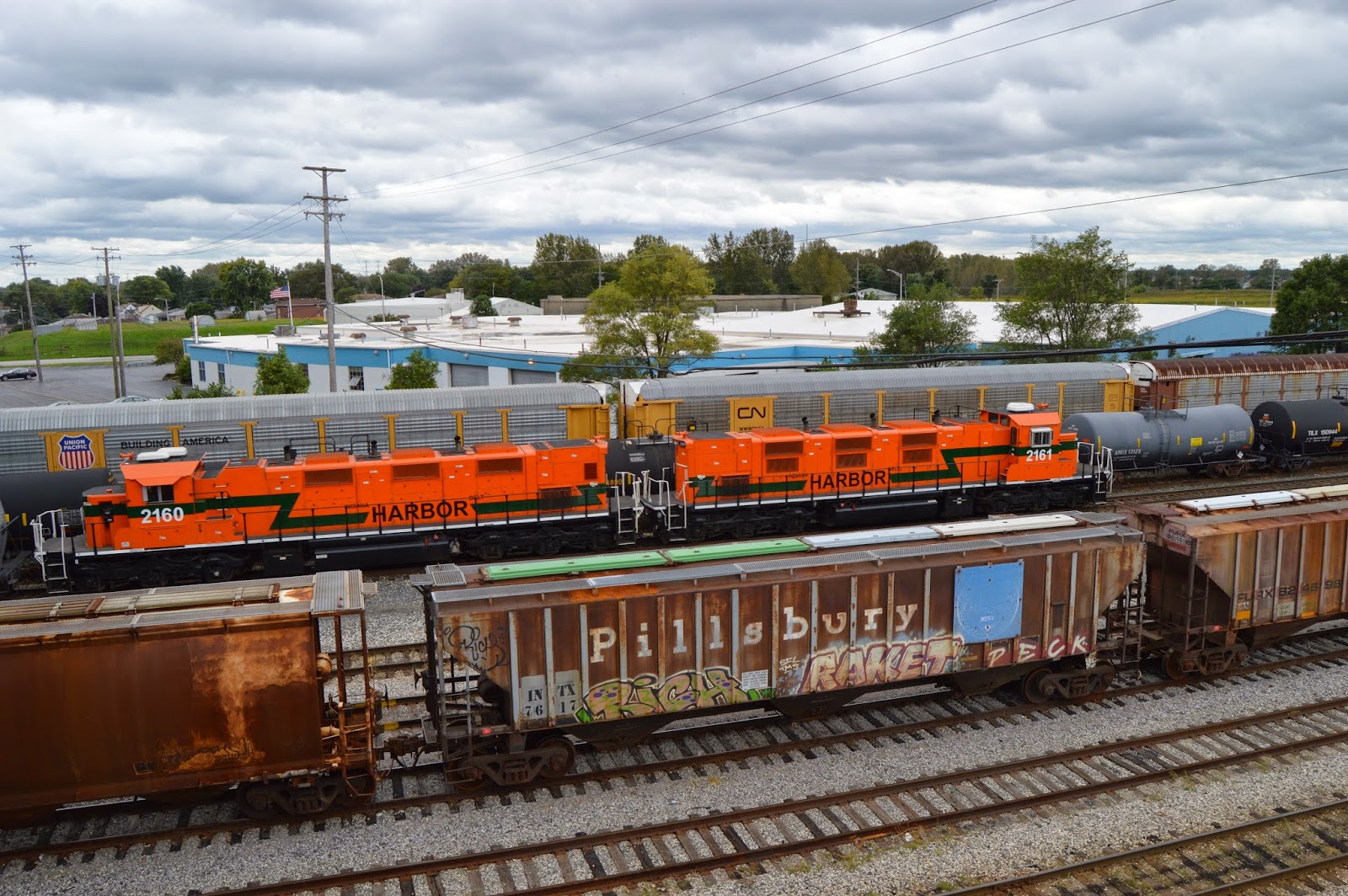 But the picture of the other side of the Pillsbury car gets me ahead of the story. The first yard photo I I took was from the northeast side of the overpass looking east. All of the cars that you see were stationary; that is, they were parked. The empty track, tank cars, and vehicle cars are on the IHB mainline. The tracks to the left of the three mainline tracks are the IHB Calumet City Yard.

There is at least one engine on the far end of the vehicle cars, so this train is eastbound and is probably waiting for clearance to enter the IHB Gibson Yard. I read in a Trains Magazine article that Gibson is now the clearing (switching) yard for all vehicle trains in the Chicago-land area. The direction of the vehicle train is confirmed by a picture from the west side of the overpass facing west.

You can see the end of the vehicle train and that there is no engine on the west end. Because of the gondola cars we see above, and the lumber car and four box cars we see in the close up to the left, the "tank car" train is really a mixed freight. Because the train goes around a curve, I can't confirm that it is a westbound train, but I assume there are engines attached and these cars are not in storage. The only "fallen flag" I spotted is a Southern Pacific vehicle car.

And then I heard some diesels. When I looked east, I saw headlights in the distance.

When I zoomed in to the camera's resolution, I determined there are two engines pulling the vehicle train. As every IHB train that I have seen, this train was moving slowly. Because of the slow speeds of the trains in this area, I'm including the timestamps as captions. I then determined that I was probably hearing the diesels on this intermodal train to the northeast.


This was also a slow moving freight. It took about 4 seconds to travel the length of a car. This gave me time to find the engines in a northwesterly view. I took several pictures so that the numbers should be visible in at least some of them. This is just one of the engine shots. They were BNSF 7132 (ES44C4) and 5528 (C44-9W, built in Aug. 2004). Note that these BNSF engines are pulling a CSXT train. I know that the former Baltimore & Ohio tracks go through Garret, IN, so I traced the tracks to Chicago to verify that these tracks are part of that route. A map (select Chicago Terminal Area with Vicinity Railroads and Industries) marks the track as BOCT east of N. Hammond and as CSXT east of N. Hammond. (BTW, this is the best map I have found so far of the Chicago area. One reason is that it names the small yards as well as the major yards. This map is how I found the Calumet City Yard name. Another reason is that it includes major highways so that it is easier to correlate this map with regular road maps. And it explicitly shows grade separations.)
I spent the next several minutes catching the painfully slow progress of these two trains.
I thought the reason cars took a long time to get across Chicago is because they set in yards. I'm learning it takes a long time because they go sloooow. To the right, the BNSF engines are just beyond the two blue stacks on the other side of the orange stacks as shown in the following closeup. 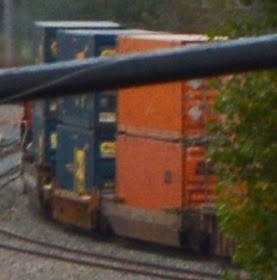 The above "gensets plus Pillsbury shot" was at 13:07:54. In the following three pictures, we can see the progress of the engines of both the IHB and BOCT/CSX/B&O trains.
Then I focused on getting pictures to determine the car types for the IHB train.


The above view also provides a closeup of the track layout. It appears the Google road map is not correct. But studying the satallite map explains why the westbound mixed-freight next to the eastbound vehicle train is parked. It is yielding to the active mixed freight because the tracks soon merge.  This train not only had the normal coil cars -- gondolas with curved covers -- but some flats with covers I have never seen before. I counted these as coil cars since they probably have something to do with the steel industry in southern Chicago and northwestern Indiana and because they were blocked with the regular coil cars.


And another timestamp of the progress of the trains.

The CSXT train has an End-of-Train Device that measures and reports information such as the air-line pressure. (Trains)


This summary of the mixed freights does not include all of the parked train since it went around the curve on the west end and there were some cars under the bridge that were not in the photos.

So it took the 48-unit IHB train about 2 minutes and 20 seconds to pass.

Update: Randy Olson posted three pictures of two trains at the east end of the yard.

Posted by Dennis DeBruler at 2:05 AM