It is a lot easier taking pictures of trains in Evansville than the Chicago area because there are not as many quiet zones. When I was driving east along Ohio Street, I was forced to turn north on 9th Avenue because they were doing road work were I wanted to go to get pictures of the bridges across the mouth of Pigeon Creek. While I was still driving along Ohio Street, I heard an engine horn. I had plenty of time to find a parking place and get out to take pictures. In fact, I had to wait quite a while for the southbound (geographically, westbound) train to appear. I patiently waited for the engines to fill the frame. But when I took a picture of the engine, I got a memory card error message! Unless you know of a stupidity contest that has monetary prizes, I'm not going to admit what the problem was and what all I did before I found the problem. Fortunately, this was a slow freight so I could still see the front of the train in my first picture. But there is no way I'm going to get the numbers of the two CSXT engines.

The first numeric column is the car type counts for this train. 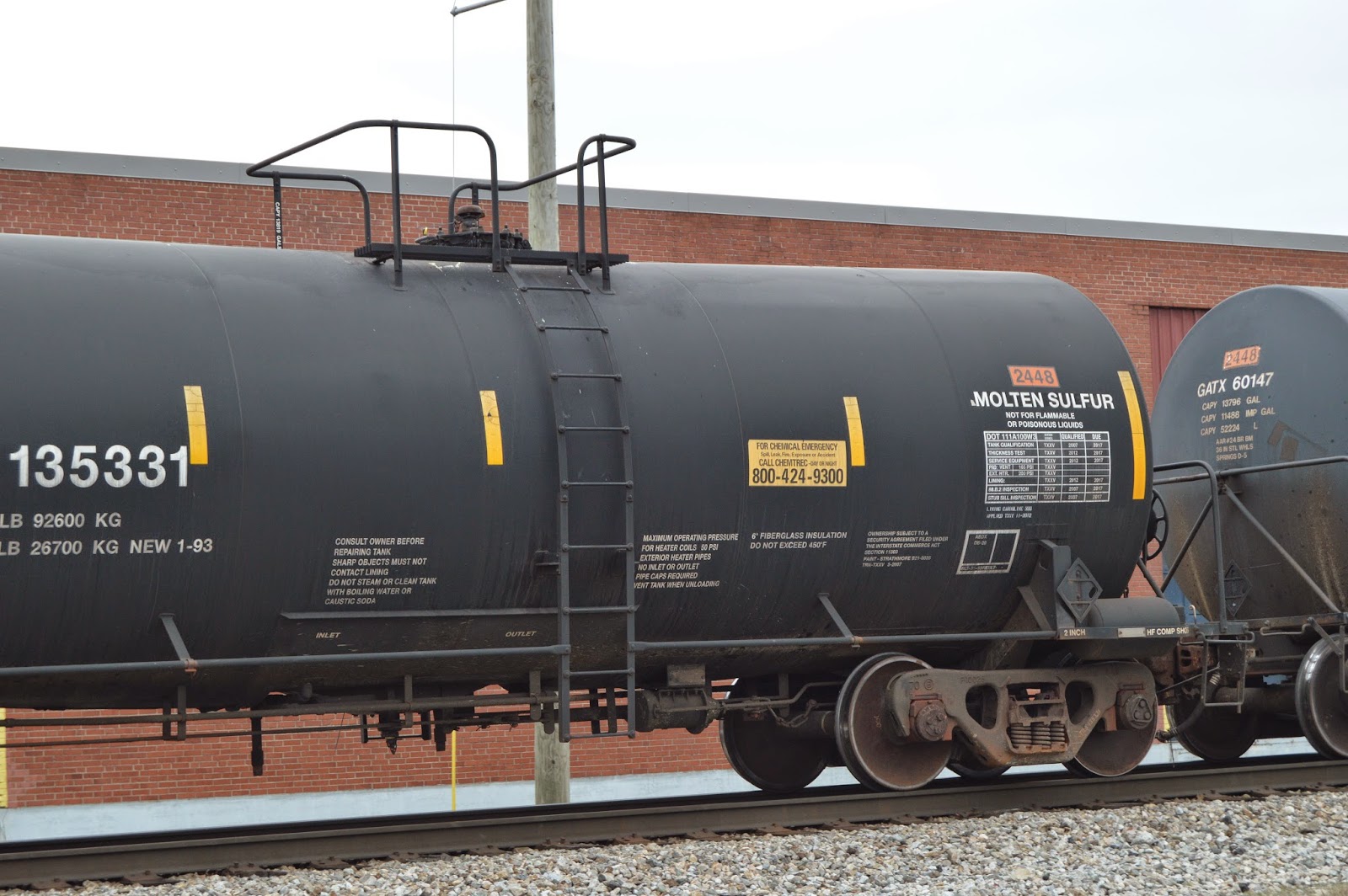 Of note is that some of the tank cars were carrying molten sulfur.


There were three BN "fallen flag" cars in this train. 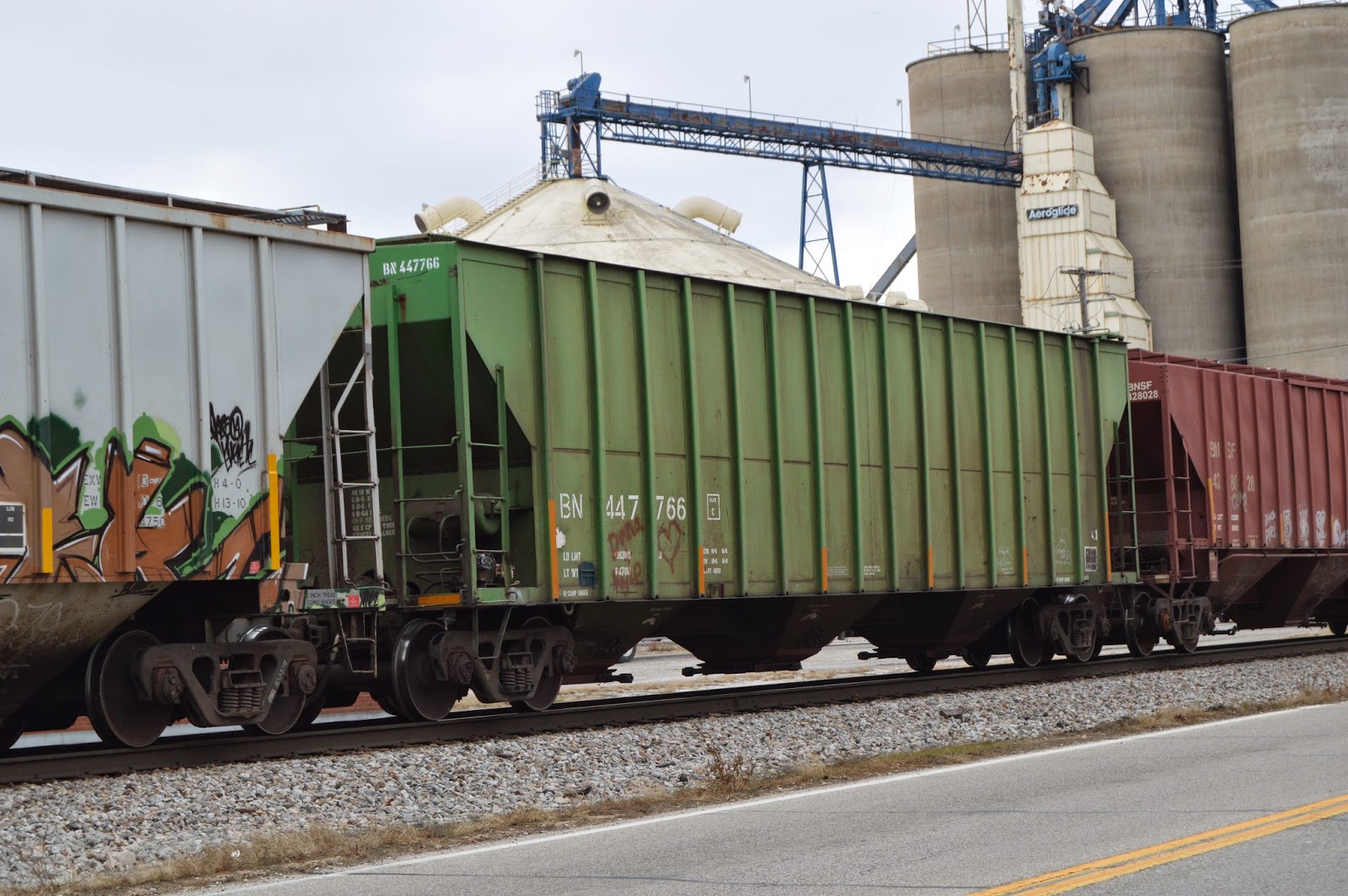 When I was at the Allens Lane crossing of the ISW and CSXT tracks confirming that the service road next to the ISW tracks was posted No Trespassing, I heard a diesel horn. So I waited. It was a southbound CSXT train.  The tracks in the foreground are the ISW tracks that join the CSXT train just south of Allens Lane. The engines were CSXT 591 (CW44AH) and 460 (AC4400CW). The car type counts are the second numeric column in the above table. This was a rather mixed freight. The longest stretch of one car type was 7 cars. 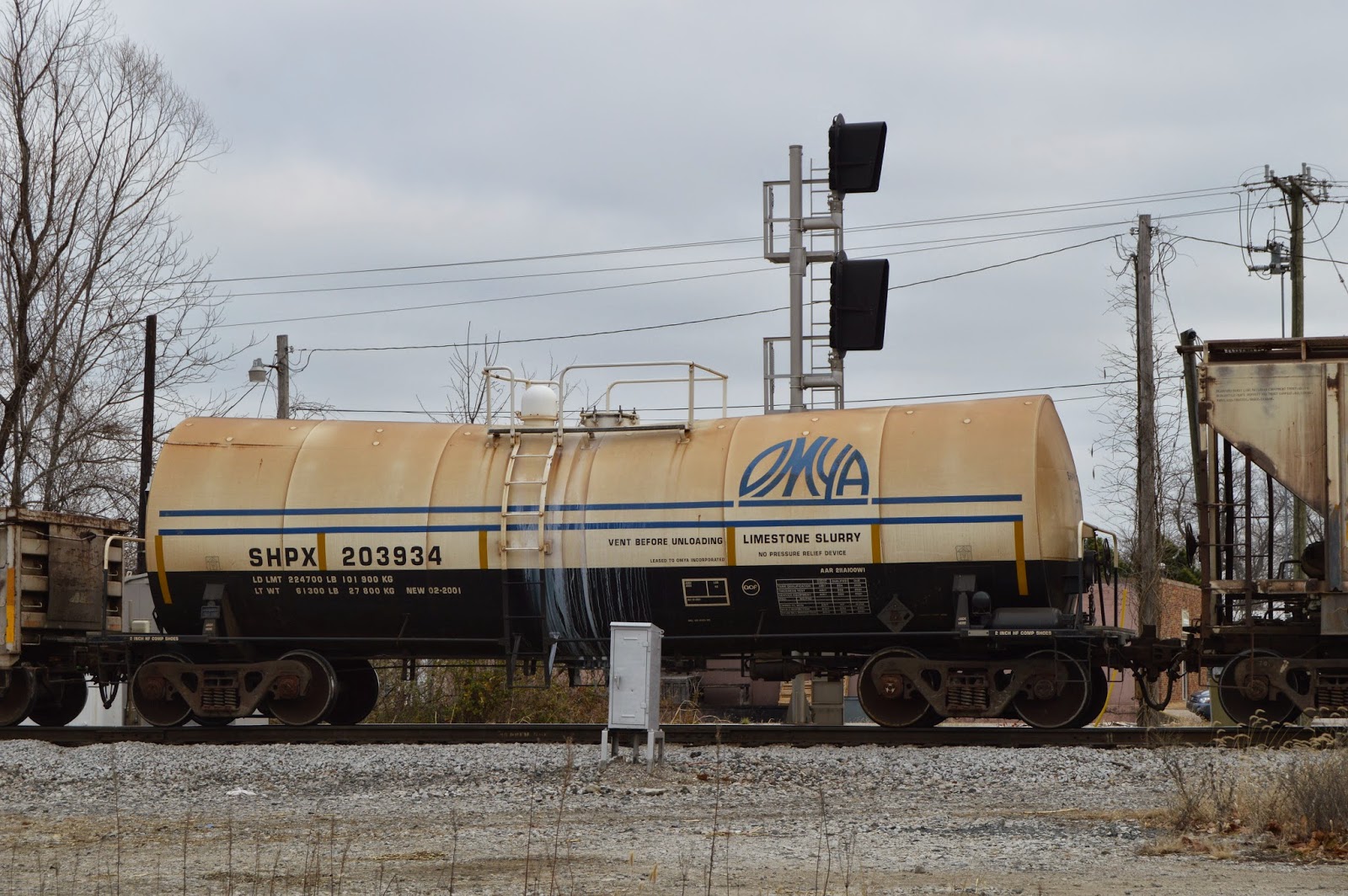 Some of the tank cars were for LIMESTONE SLURRY. And others were labeled CLAY SLURRY OR CALCIUM CARBONATE ONLY. I wonder if this is for the oil well industry in southern Indiana or the limestone industry in south central Indiana. But the most unusual thing was a string of five open hopper cars. This is the first time I have seen open hopper cars with the old-fashoined drop-door bays since I started watching trains last May. 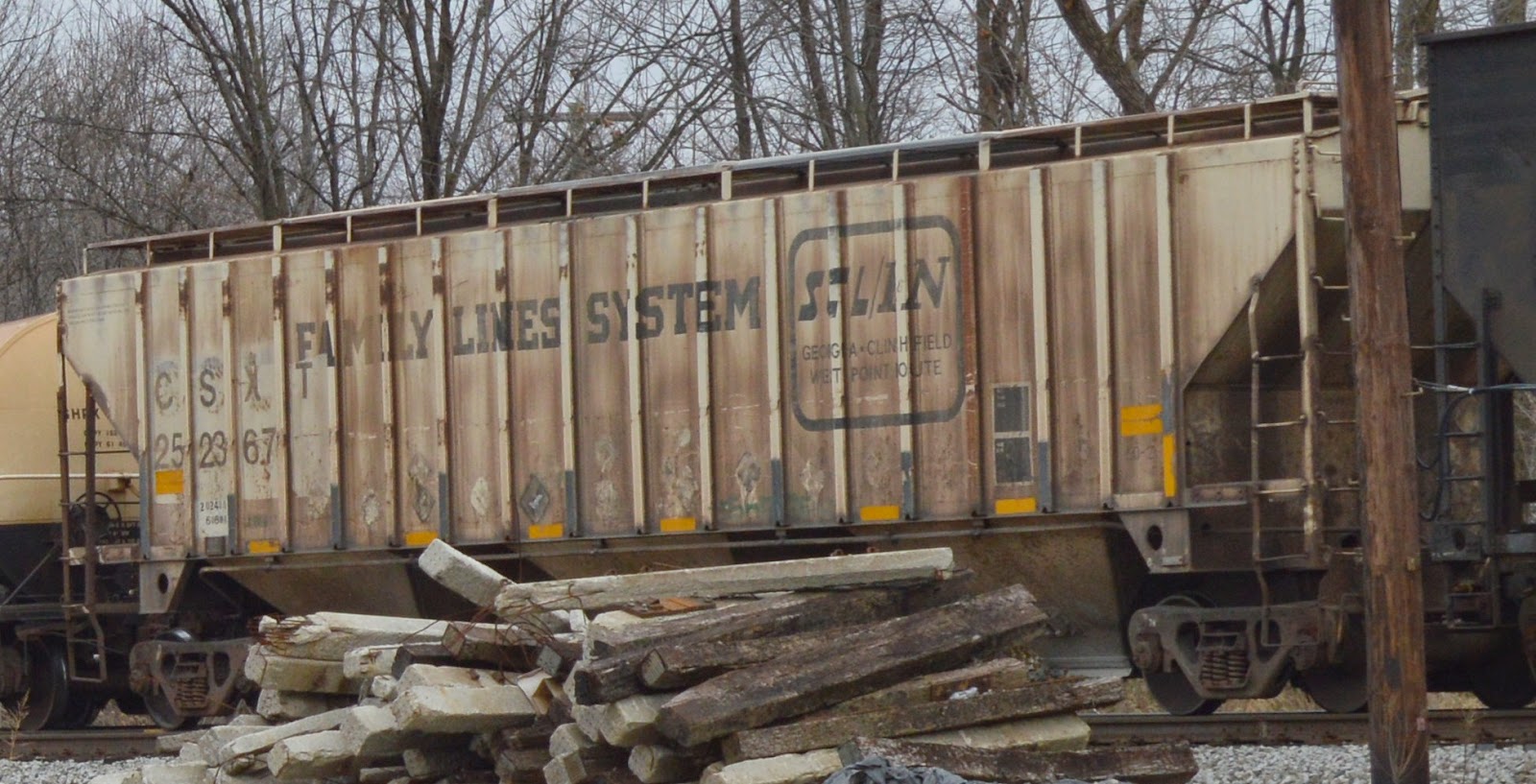 There was one "fallen flag." 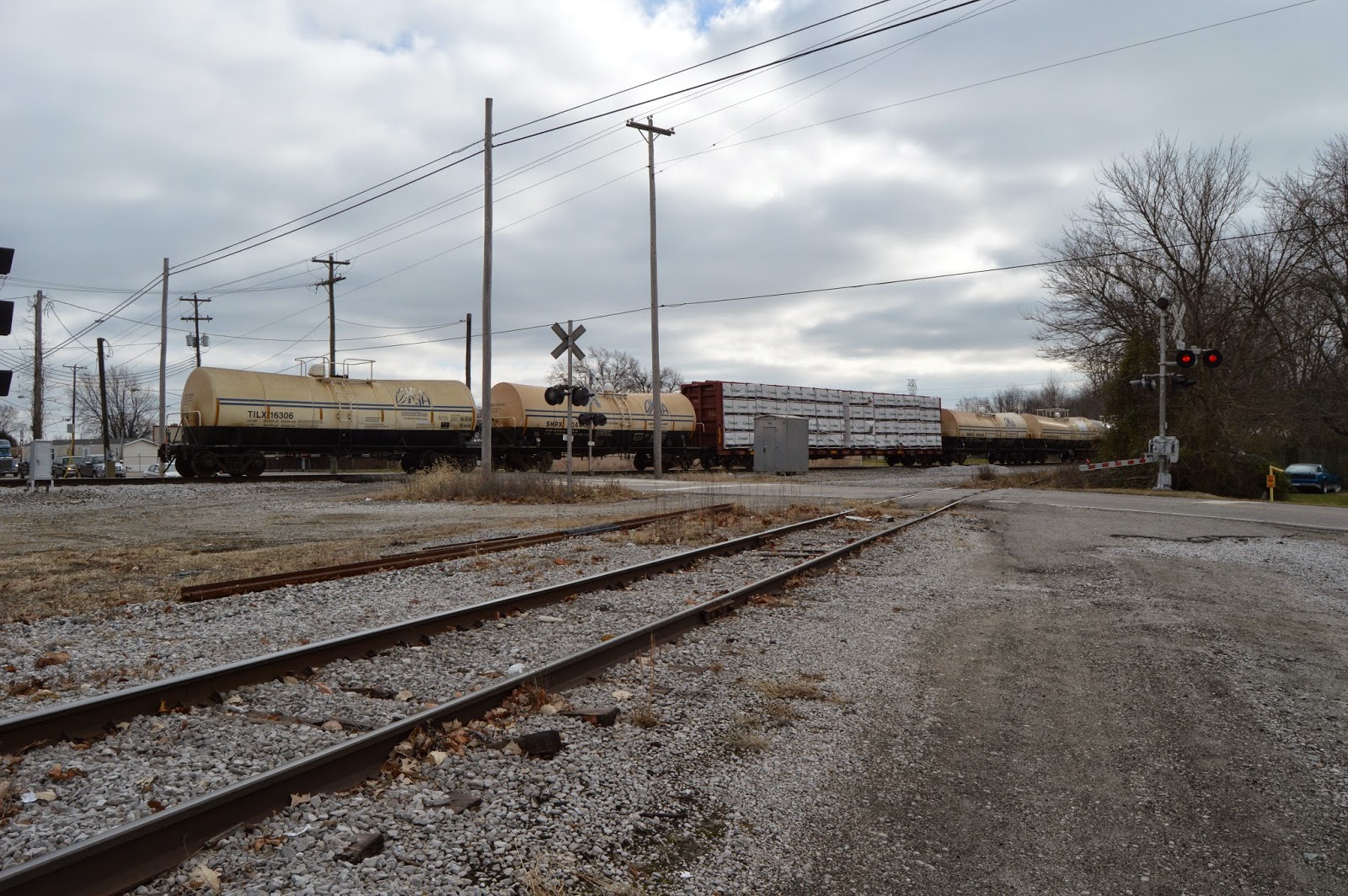 I include a shot of the end of the train since it captures more "slurry" cars and where ISW connects to CSXT.
Posted by Dennis DeBruler at 11:32 PM