All of these pictures I took below were during the day. I need to look after dark even though I can't take pictures then. The devices light up only at night to save battery power. Reflective material that catches the locomotives headlight provides daytime warning. [Trains]

They are supposed to flash during the day if the brakes are applied. UP introduced EOTs in 1984.

The End-of-Train Device (ETD) transmits brake line air pressure and direction of movement every 40 seconds. "If there is a loss of radio continuity between the ETD and the cab, this will be displayed." A modern ETD is also required to receive a command to apply emergency braking (dump the air). [Trains] But the article doesn't say if a "hello" command is sent every 40 seconds from the front to the back so that the ETD can report the loss of communication to the ETD. We called a periodic "can you hear me now?" message the "heartbeat" protocol, and it was standard practice when designing communication protocols between computers.

They were originally called rear-end-devices. But workers added an adjective that expressed their displeasure with loosing the caboose thus giving us the acronym FRED. That adjective has since been sanitized as "flashing." Other acronyms this brings to mind is FUBAR (fouled up beyond all recognition) and RTFM (read the fine manual). I understand that FUBAR was invented by the military. I don't know which profession popularized RTFM, but it certainly applied to my profession of computer science. Actually, there were days when FUBAR was rather appropriate also. We had a saying: "it takes a computer to really mess things up."

When a mixed freight train that was parked in Downers Grove started moving, I noticed the End-of-Train device did not have a red light.

To try to prove it did not have a blinking light, I took several pictures. And almost every picture lined up with a pole in the commuter fence so I had a hard time finding a clear shot of the End-of-Train Device (EOT or ETD). But multiple pictures still don't "prove" that a light did not blink on. So I took some video. The videos are boring and not worth posting so take my word for it -- there is no blinking red light.

I remember seeing red lights when they first replaced cabooses with EOTs. The red light indicated the end of a train like the marker lamps on a caboose.

So I made a point of looking at the end of trains. None of them had a red light, blinking or steady. CN/IC on the left. On the right is a switching move in Mendota, IL. Below are views of the end of an IHB train. 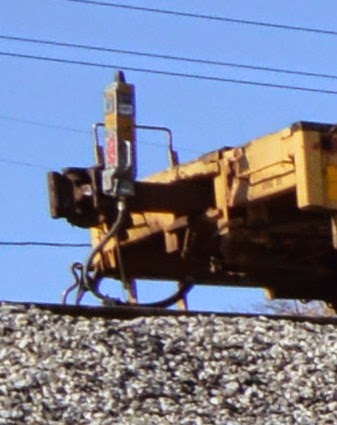 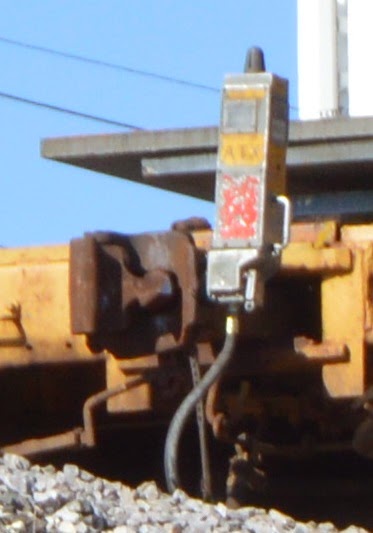 The photo to the right is at camera resolution.

Some trains have a red flag instead of an EOT. I saw one on the end of a BNSF/CB&Q train that was being switched in Mendota and on an IHB train near the Burnham Ave. overpass. It seems if a train is going to go slow and the trip is short then it needs only a red flag.

Email ThisBlogThis!Share to TwitterShare to FacebookShare to Pinterest
Labels: railroad