Update: the Big Four railroad bridge over the Wabash River is still used to supply this plant. 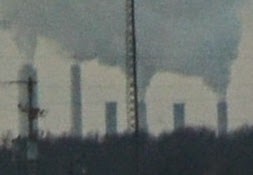 While driving west on IN-64 towards the Wabash River, I noticed a power plant plume. It appears that 3 or 4 of the units were operating. Later I passed a sign indicating it was Duke Energy. The Gibson Generating Station was originally owned by Public Service Indiana. It has 5 units generating 3,340 megawatts. It is the third-largest coal power plant in the world, and the largest still operating in North America.

The 4 original stacks are 550 ft and the 2 newer stacks are 620 ft. No wonder they are easy to see over the treeline. Actually, the plant may be running at full capacity because two of the stacks are now derelicts left to nesting cliff birds such as the peregrin falcon or the bald eagle. That gets a "hidden nature neighborhood" award ("nature" label). In fact, south of the cooling lake is Cane Ridge National Wildlife Refuge, which serves as a nesting ground for the least tern, a rare bird. And they provide public access to the Wabash River on their land. In this day and age of fenced off and gated properties, that is good to hear. It is interesting that they built such a large cooling lake given its proximity to the Wabash River.
This is the largest power plant in Indiana.
I believe the plume is dark because I was running out of daylight, not because of particulate emission. They finished adding selective catalytic reduction (SCR) units to reduce NOx emmisions in 2008. To keep the SCR catalyst clean and operational, it is now economically beneficial for the plant to remove fly ash. And their web page indicates that all five units have sulfur dioxide scrubbers. So they probably burn local southern Indiana coal rather than Wyoming Powder Basin coal. My Dad said that the Indiana coal burns hotter and that helps make it economical to run the sulfur scrubbing equipment. In contrast, most Illinois coal burning plants use Wyoming coal or natural gas. The Illinois coal is exported to China! The Gibson plant is now having to deal with high selenium levels in the cooling pond and the possibility of leaking boron into the water tables of the area (Wikipedia).

Looking at a map, the plant has industrial spurs to the former Southern Railroad to the north and the former Big Four to the south. The Southern Railroad is now part of the Norfolk Southern and is their mainline between St. Louis and Louisville. According to my 1928 Railroad Atlas, Big Four had a route from Danville, IL, to Mount Carmel where it forked just south of town and went to Cairo, IL, and Evansville, IN.
An NS map confirms that the Big Four remnants are now owned by NS. In particular, the segment from the former Southern route south to the fork and the initial part of the two forked branches are former Big Four trackage. The Evansville branch still has a bridge across the Wabash, but it ends at the power plant. The Cairo branch ends in a loop east of Keensburg.


The following satellite image indicates the loop serves some sort of mining operation.

The northern Wabash River bridge carries the St. Louis/Louisville traffic and makes economic sense. Note that there is a swing span on the west side with most of the west half of that span over land. A satellite image confirms this. But the southern bridge seems to support just the power plant. Thanks to an error in the Bing road map of terminating the line for the railroad too soon, I can determine that it has a swing span more towards the center of the river.

While driving north on IL-130 south of Newton, IL, I noticed another smoke plume off to the West. I have done this trip multiple times, but this is the first time I noticed a plume. I was aware of the Newton Power Plant near the north side of Newton Lake because I had studied a spur that runs south from a CN/IC route along IL-33. I noticed the "flat top" of the plume and kept my eye on it and took several pictures from IL-33 because I was running out of daylight, and I was hoping at least one of them would turn out. The last one I took turned out to be the best.

I'm sure the flat top is caused by layers of the atmosphere being at different temperatures. Probably an inversion of warm air on top of cold air. But why the boundary between the layers causes a ceiling for the plume is still a mystery to me.

Unlike the Indiana plant, the owners of this 1,225 megawatt plant are still bellyaching about installing sulfur dioxide scrubbers so that it can use Illinois coal again. Ameren got an extension from 2012 to 2017 by holding jobs at other coal burning plants hostage (SourceWatch). Now Dynegy wants to buy this plant and four others in Illinois (Coffeen, Canton, Bartonville, and Joppa) but delay the clean up until 2020. And both companies refuse to consider an offer from a Illinois coal producing company to install the scrubbers. (WXEF, ChicagoBusiness) It is so nice to see the Indiana plant as an example that not all states are as screwed up as Illinois.

If NOx and sulfuric acid are not enough to worry about, I learned that you can also worry about toxic materials and chlorine gas. The page on chlorine gas makes me wonder about the risk of the Chicago Water Filtration plant that is right next to the Magnificent Mile and The Loop.

Posted by Dennis DeBruler at 9:11 PM