If you are wondering why I'm discussing such small dams, it is because Fort Wayne is my home town.
Hosey Dam (3D Satellite) was built in the 1920s as a hydropower dam.
St. Joe Dam (3D Satellite) has the pumping station that supplies water from the St. Joseph River to the filtration plant.
Cedarville Dam (3D Satellite) is a reservoir dam that creates Fort Wayne's main drinking water supply.
Lost Dam  (Satellite)

There was also a dam at the beginning of the feeder canal for the Wabash & Erie Canal. 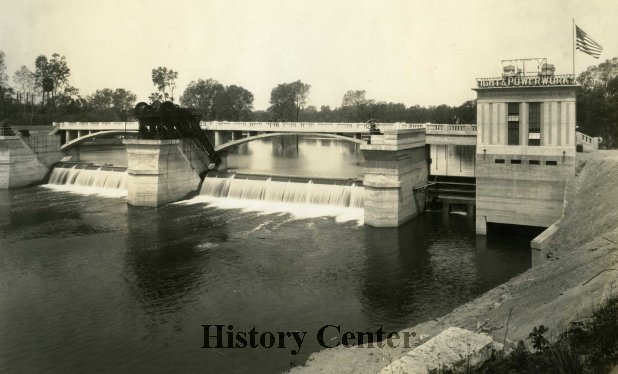 Evidently the roller gates are again broken. Only the Tainter gate is operated by City Utilities. Between April 15 and October 15 the gate is normally closed to maintain the normal summer pool for recreational use. The rest of the year it is open to allow the rivers (St. Mary as well as St. Joe) to "fall to a low winter pool level."


It is a shame that City Utilities can't keep the roller gates operational because they should be all the way up when the river flow is heavy to help relieve the pressure on the river levees. And evidently they can't raise the Tainter gate very high. Normally a Tainer gate on a river dam would be so high that it is horizontal near the top of the structure.

The first view I've seen of the backside of the dam.


Becky Osbun posted four photos of the St Joe Dam and its pumping station from the ACPL Community Album.
Neil Wayer 63,64 and 65 we walked through the building and across the dam with our bicycles to play Wildcat baseball in the park.
Dennis DeBruler If I remember correctly, we walked through the pumping station on the balcony along the wall.
Neil Wayer Dennis DeBruler Yes we did and it had the coldest water in their drinking fountain.
Michael Wagner Been through there several times. We used to fish just below the dam.

The river level is raised during the Summer months to provide more drinking water reserve.


There are more views of the St. Joe Dam in the background of some of the photos of the Municipal Beach.

Below are photos and sonar images of the area of the lost dam provided by Andrew Harber on Jun 10, 2021.


Two images with the comment: "These are going down river and you can see how it gets shallow we’re the dam and debris were, and then the hole from the water falling over the dam."

Posted by Dennis DeBruler at 10:56 PM