It doesn't take any bridge expertise to spot the suspended span is in this cantilever bridge!

Black Hawk Bridge
Posted April 27, 2019, by Don
Closed due to concerns about the effects of high water on the bottomland road on Wisconsin side. [Flood of 2019]


Black Hawk Bridge
Posted June 2, 2017, by Don Morrison
Blackhawk bridge has reopened after being closed due to road washout(leading to a fatal accident) on the Wisconsin side.
http://www.kcrg.com/content/news/Highway-82-closed-between-I...

Many times the suspended span is built on barges then floated under the bridge and lifted into place. Evidently, if the cantilever leaves are strong enough to hold a live load, they are strong enough to hold an additional dead load during construction.
Iowa DOT is studying how to replace the bridge. This is actually good news because some comments indicated that they were seriously considering tearing down the old bridge and not replacing it. I wonder if they would run a ferry or if they would require people to travel to either La Crosse or Prairie du Chien. Both are 40 miles away. 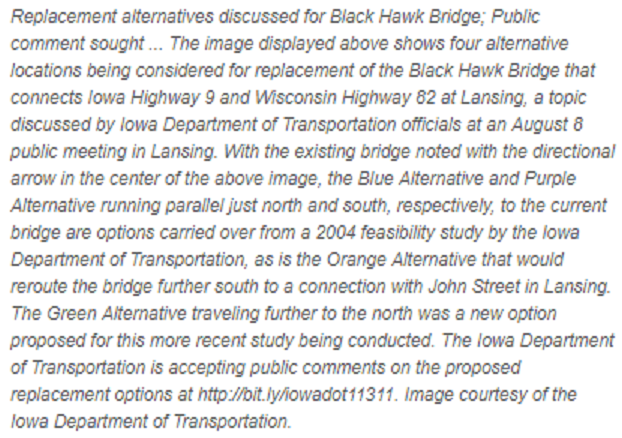 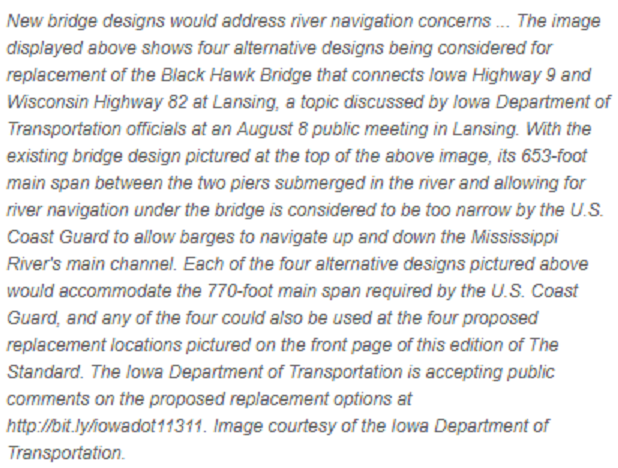 When asked if the current bridge could be kept for pedestrians and bicyclists if a new one was built, a DOT official responded that the DOT is not in the business of maintaining unused bridges. If the bridge was to be kept, it would need to be purchased by a group or an individual who would maintain it as a private enterprise.
[Reporter Susan Cantine-Maxson via WaukonStandard]

Posted by Dennis DeBruler at 11:16 PM