The following is from one of my visits to Lemont:

I caught the Mary C lowering its pilothouse in July, 2014.

In fact, I have caught a towboat pushing empty barges.
(new window)

I found a photo of each of Illinois Marine Towing's towboats.  Note that all but two of them have variable height pilot houses. The small fixed height towboat works around Channahon, and the large one works between Lemont and Peoria.

I was shocked to learn that some big towboats also have retractable pilothouses. The first one I saw was Sam M. Fleming on July 8, 2018.
I followed it for a few days. It came back to the area on July 16 and Aug 18, but I wasn't able to get decent shots of it then. I found photos of it working on the Mississippi River, so it is a long haul towboat as it size would indicate.

As it was going northbound on the Chicago Sanitary and Ship Canal, it passed a southbound Al Weaver that "parked" on the side of the canal so I was able to get photos of it with the pilothouse up and down.

Norman is currently owned by a company based in Houma, LA. But it does get up the Illinois Waterway. Here are this photo at Joliet, IL, is one of 15 locations it has been caught at. The 15th photo shows it running light with its pilothouse all the way down.

David Gulden posted two photos with the comment: "The WILMINGTON."

The radar and antennae are mounted different on this towboat, so it appears at least two of their 66 boats have retractable pilothouses.
Sometimes on my way home from Joliet I revisit the 135th Street Bridge. As I started up the bridge, I saw that a tow was going upstream. So I raced (OK, trotted) up the bridge grabbing pictures as I went hoping it wouldn't get too far before I got to the top. Note that the tow had its bridge in its full, upright position. 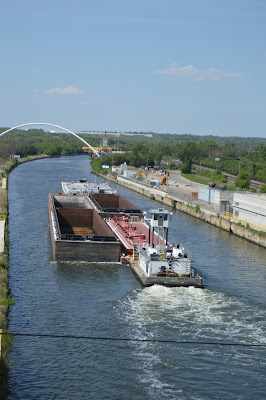 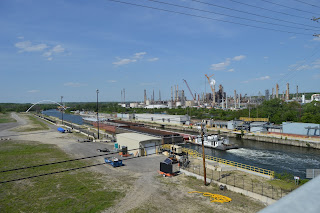 Upbound on the Des Plaines River in Joliet between Jackson Street and Ruby Street Bridges --- Sydney Reese. The largest of Ozinga's Middle River Marine's four towboats: 73'x20', 1200hp. Built in 1965. [BoatDB] (Their web page is out of date. They now have a 77' 2000hp retractable-pilothouse with Z-drives named Kamryn Olivia stationed in Mokena, IL. (But Mokena does not have a waterway!) [WaterwaysJournal]) (Update: MWRD video of Sydney pushing three ACL barges.)

While I was at McDonough Street Bridge, I caught part of a towboat through a fence. It turned out it was the Sydney Reese, and a closeup (below) gives us a good view of the hydraulic ram that raises and lowers the pilothouse.

On the left of the following tow that I caught while I was at the old Bear Trap Dam site is a pilot house in the raised position.

The following takes advantage of every pixel that was in the picture (that is, it is original-size). 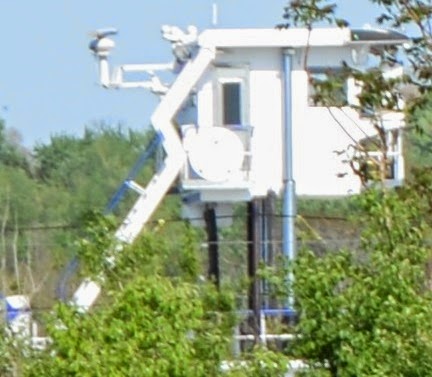 Around 3:53 of this video of towboats working on an icy Illinois River you can see the pilothouse go up. This video also catches two more tows going downbound on the river. Note that the size of the tows are just 2x4 or smaller when there is ice. At 7:55 you can tell from the propwash and the engine exhaust that the port side screw is pushing harder to help get the front end of the tow around the curve. The M/V Sugarland appears to be another retractable towboat. At 17:23 we see that it takes lots of horsepower to shove through ice because those are big prop washes considering it is a downbound tow. Also, I'm really impressed by the river bluffs in the background. I wonder how far up north they were on the Illinoi River. His commentary says that there had not been traffic on the Mississippi north of the Illinois River mouth for a month.
3 photos of M/V Norman, two of which are in the down position
Posted by Dennis DeBruler at 4:41 AM