(HAER, none of the photos are digitized. But there are three diagrams.)

When the Chicago Sanitary and Ship Canal (SC&CS) was opened in 1900, it terminated at a controlling works.

The seven sluice gates are still operational. (Bays were built for 8 more sluice gates, but they were never needed. They still have just bulkheads.) The sluice gates can be opened during heavy rains to dump excess water into the Des Plaines River to maintain the CS&SC at the correct water level. There is a sign on 9th Street before you cross the river warning you that the height of the river may suddenly rise and cover the road. That is, if the sluice gates are opened, they dump enough water into the river to flood the area. The gates are opened about 6 times a year after heavy rains in the area when the flow in the canal is more than the powerhouse can handle.

When the controlling works were built, a 160' bear trap dam south of the sluice gates was used to handle the day-to-day adjustment of water flow to control the canal's water level. This gate also allowed ice and debris to flow down the river.


In 1907 the canal was extended south, and a lock with a 36-foot drop was built. If I remember correctly, that was the largest drop for a lock in the world when it was built. It still exists as the small, abandoned lock next to the current lock. That sluice gate and spillway just west of the old lock and the water released through the powerhouse is now used to fine tune the level of the canal. 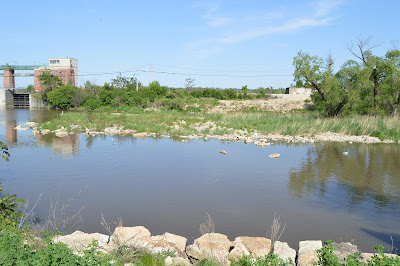 As part of the 9-foot navigation project of the Illinois, Des Plaines River and the CS&SC, the Lockport Lock and Powerhouse was built. The powerhouse has a 38 foot difference between its head and tail waters. After the powerhouse and spillway were built, the bear trap dam was removed. This photo shows the levee that replaced the bear trap gate.
Judging from the dericks in the background of the photo below, they are still building the bear trap gate. Since the bottom of the sluice gates are exposed, the canal has not been filled yet. I don't think this was the opening ceremonies. I think this is just a photo of a tour group. There were a lot of tours of the construction of the canal because people understood it was a major engineering feat of its day.


The Midwest, including Chicago, had a lot of water dumped on it the afternoon of May 17, 2020. I know because we had more water flow into our basement that afternoon than we had ever seen in the over 40 years that we have lived in our house. I think this flow is over the road just downstream from the Controlling Works.

Posted by Dennis DeBruler at 2:06 AM

Email ThisBlogThis!Share to TwitterShare to FacebookShare to Pinterest
Labels: wwSS