When I viewed the industries along the Sanitary and Ship Canal a few days ago, I did not notice any plumes. But on Jan 17, 2015, while driving south on I-355, I noticed that there were several plumes. My wife was able to get the camera out, learn how to use it, and get some pictures while we were still on the Veterans Memorial Bridge. And fortunately we were in the minivan so that we could better see over the bridge's side barrier.

The engine head lights caught my eye. The picture of the engines is at camera resolution. One can verify it is BNSF/Santa Fe (i.e. orange) and determine that the train had five engines. I believe the plumes flatten out at a "ceiling," but it is hard to verify because the plumes are blowing towards the camera. In the next view, you can see the CN/GM&O/Alton tracks.

I need to do more research, but I suspect that some of these plumes are just water vapor out of cooling towers. Note that several of the stacks don't have visible output. Is that because the plants are "clean" or because they are idle? According to Google, the I&M canal is someplace among the trees in the below. I need to start exercising so that I can traverse the I&MC Trail Passage, which is probably on the towpath of the I&M canal. 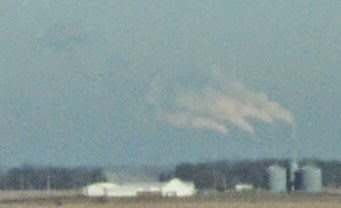 On the same trip while traveling south on IL-130, I spotted plumes to the east. I believe this is the Gibson Generating Plant. On some monitors you can spot a blackish spot in the upper-left corner of this heavily cropped picture. Once the water vapor dissipates, there does seem to be some "smoke."

Then while driving south on University Parkway near Evansville, IN, I saw another plume. Note that there is two layers of sky, a blue layer over a yellowish layer. And the plume hits a ceiling at the boundary of the layers. 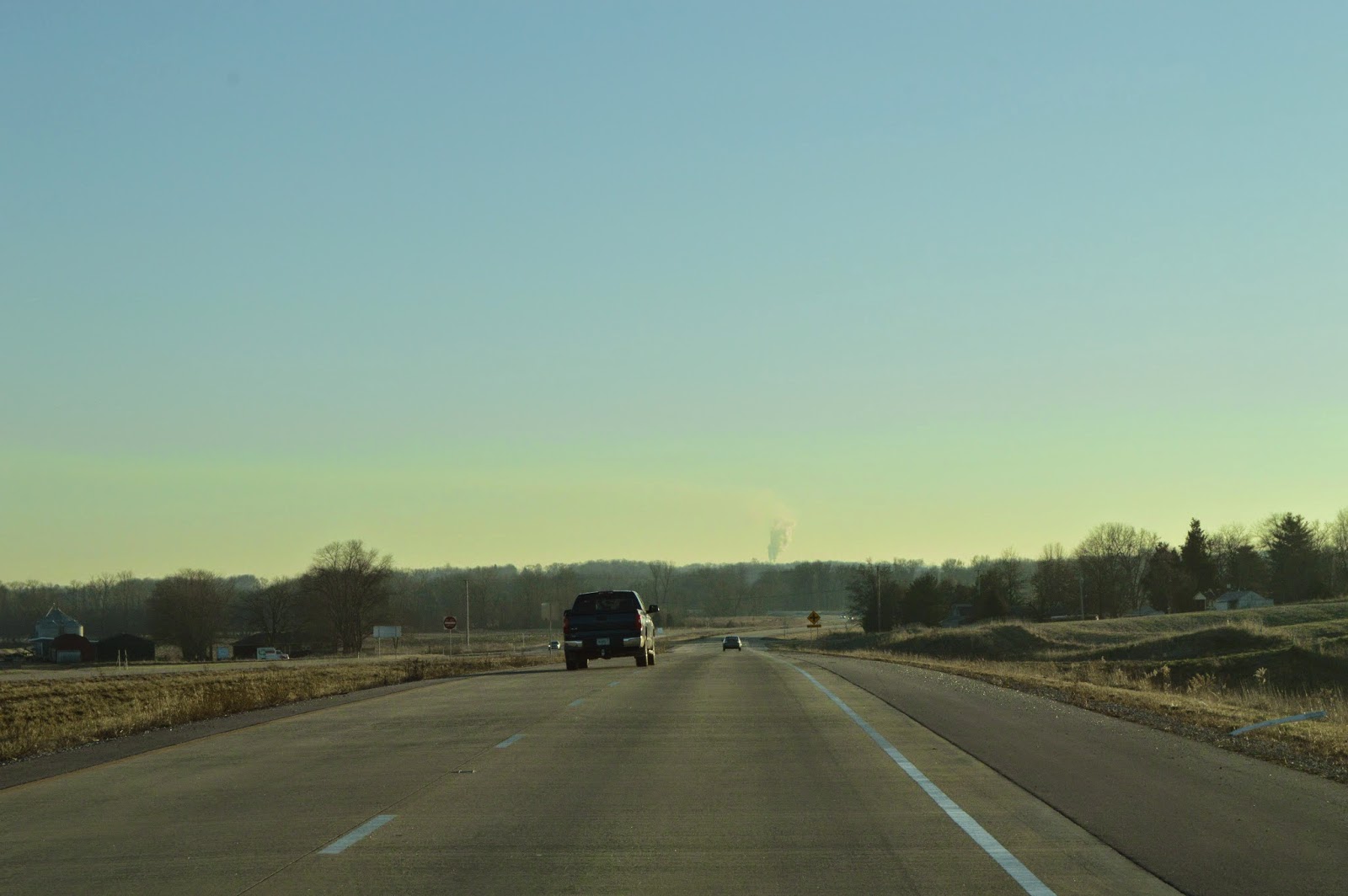 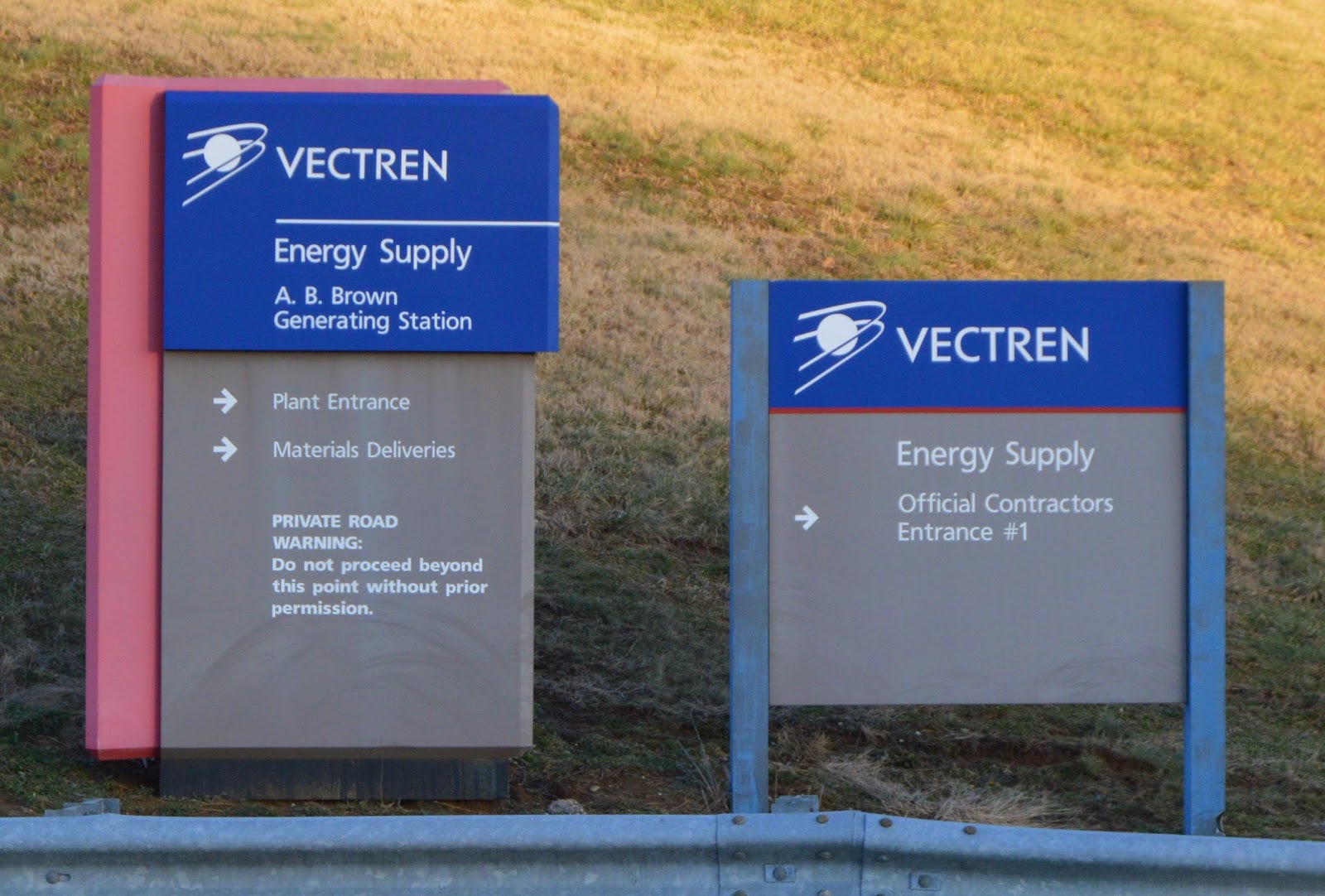 That generating plant has been on my "todo" list, and I have studied the map and knew about Green Valley Drive that parallels the railroad stub that supplies the coal trains. So I drove there to check out the plant. Fortunately, I stopped at the entrance to take a picture of the sign or I might have missed the PRIVATE ROAD WARNING. So we ended up taking some side roads. We got another "capped plume" shot. The plume is a little "dirty" after the white water vapor dissipates. 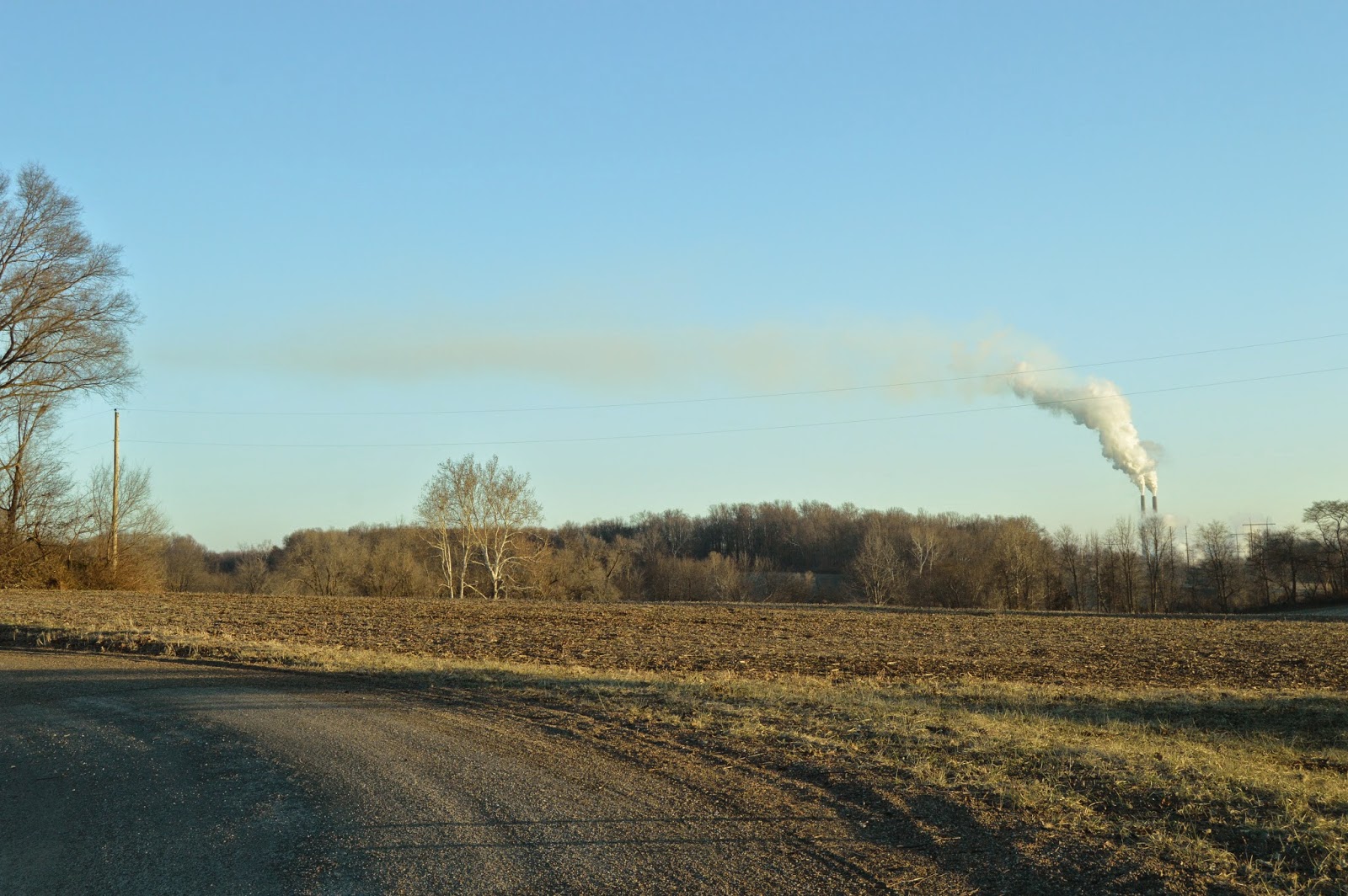 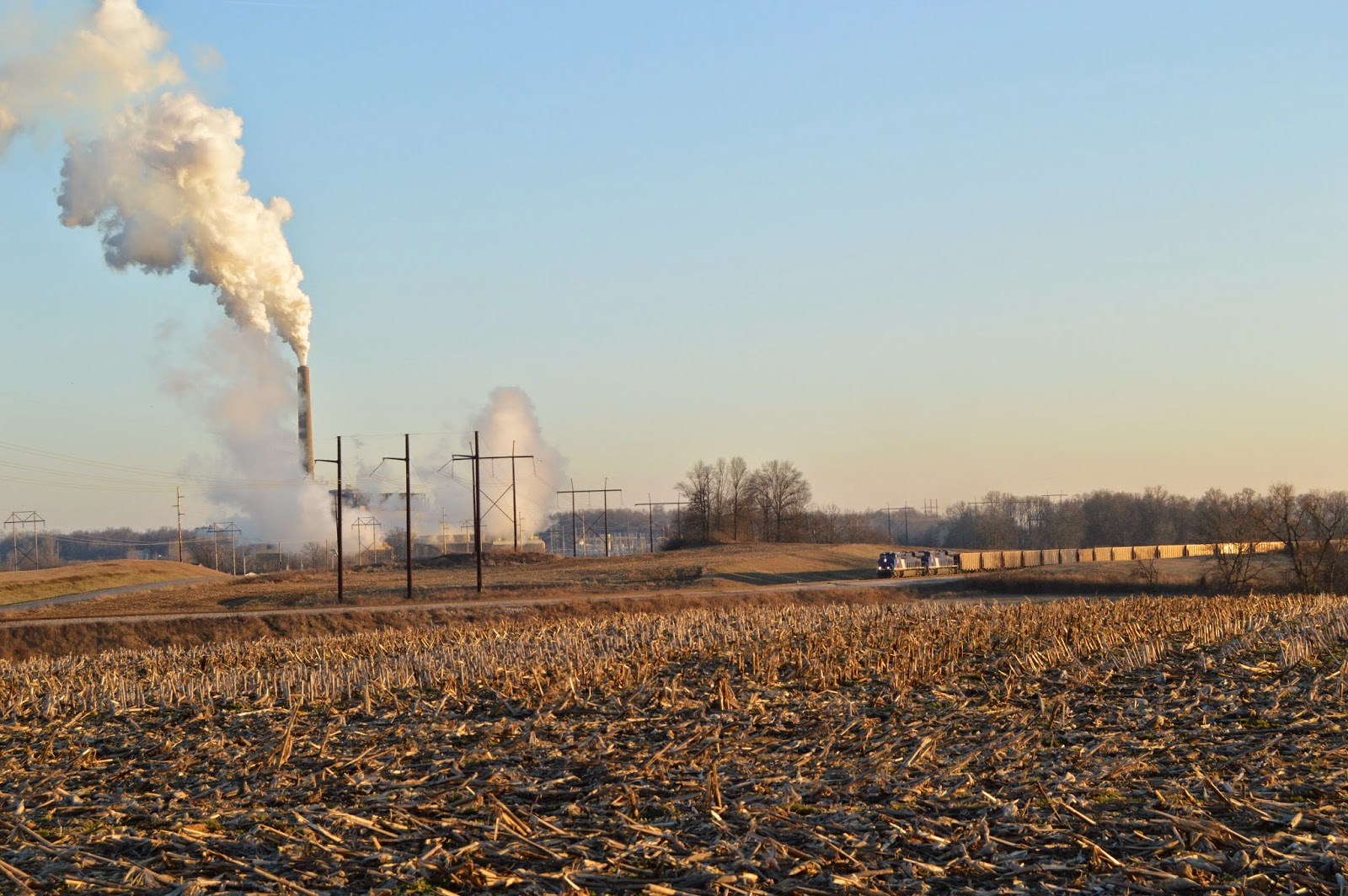 Fortunately, there was no traffic on the side roads so that I could stop and take pictures. This coal train was parked. I included the close up of the engines to show how much exhaust they were generating even though the train was not moving. 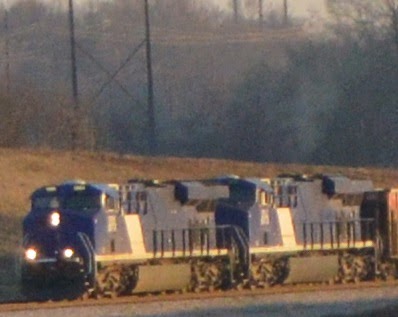 Unfortunately, the picture is not good enough to catch the logo or number. But it is not EVWR green. My dad said the plant receives coal from a mine that is south of Petersburg, IN. The Big Four owned the track that goes from Evansville to Petersburg, and it is now owned by Norfolk Southern. He mentioned that there used to be a parade of coal trucks up and down IN-62 and 57  until the railroad spur was built.

One reason I wanted to go down Green Valley Drive was to see what was on the west side of the railroad with their own unit-train loop of track. But a satellite image lets me identify the types of industry, if not the plant names.

The loop on the far west serves a coal transloading facility. So coal carried by the railroad can either be burned or loaded onto a barge.

After studying a known ethanol plant, the loop in the middle serves an ethanol plant. It has grain trucks unloading, grain bins on the right, fermentation tanks in the lower left, and both covered hopper cars (to unload corn) and many tank cars (to load ethanol) on the loop tracks.

I'm learning that different levels of zooming in Bing uses different satellite images. By panning the zoom level of this image, I counted 16 trucks in various stages of unloading. But other zoom levels had no trucks.

Posted by Dennis DeBruler at 2:08 PM