Reenforced concrete does make the study of Industrial Archeology easier. On one trip I was able to spot both of the concrete microwave towers that I remember from my childhood. So the concrete core of those towers are still standing. The trip was to Ohio using the Indiana Toll Road and returned using US-20 most of the way.

As explained in Long-Distance Phone Microwave Towers, when the first trans-continental microwave relay line was built in the late 1940s, waveguides had not been invented. The towers were big and made of concrete to hold all of the electronics at the top of the tower and they used the KS-5759 Delay Lens Antenna. I found a 1951 image of the 191 foot Chicago Heights tower that still had the Delay Lens Antenna. After waveguides and the KS-15676 Horn-Reflector Antenna was invented, the concrete towers were upgraded with this equipment. A 2009 image of the Goshen, IN tower still has these horns. The economic driver for installing this equipment was long distance calls and network TV. These towers helped distribute the TV signals for ABC, CBS, and NBC across the country. The New York - Chicago segment of the transcontinental service began service Sept. 1, 1950.

While driving west on US-20 as I approached Angola I could catch glimpses of a concrete tower south of town. So when I got to town, I went around the circle and headed south. I could not find a side road to take me further west to the tower, so I ended up finding a spot along the state road that did not have any trees in the foreground to grab a picture.

Thanks to the magic of digital zoom, I can get a better picture. The picture at the left is at the camera's resolution. After looking at the satellite image obtained from the Long-Lines site, I'm glad I didn't drive around anymore trying to get closer to the tower. This 191-foot tower is surrounded by trees so a clear shot of the tower is not possible.

I missed a turn off IN-39 to get to this tower.

So I went with plan B -- my wife taking pictures from the van as I drove west on the toll road. One of the shots came out relatively tree-free. It looks like maybe AT&T is letting the local ham radio club use this 162-foot tower. Glenn Peters has saved me the effort of trying again for the side road because he took several close up pictures in 2009. It looks like the ham radio club has added some more antennas since 2009. (see below) 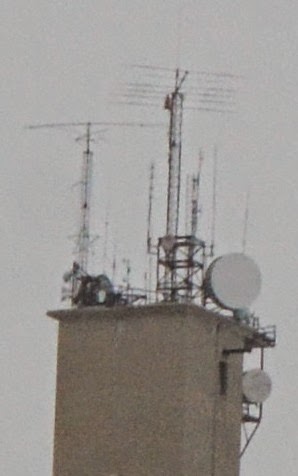 Note the first generation concrete microwave tower and a much more modern (and higher) steel tower. Since this is 1978 and fiber optic cables were still being inveted, both towers have horn antennas.

I new the first generation towers were used for the original link between Chicago and New York City. I wonder what link this tower was in. Note that it is on top of a local hill for maximum height above the horizon.

When I compared the picture to a satellite image, I could not believe how much the area has changed. Not only is all of this land now occupied by suburban sprawl, the curve in the track has been removed. I'm sure these towers are long gone.


I really like those slipformed concrete structures, both round and square elevators. I also like the square concrete former AT&T Long Lines microwave towers.
Like this one, at Collins, IA.

Steve McCollum commented "The first TD2 links were turned up for production 9/1/1950. The concrete towers were built in the late 40s. Follow this link for more. There are three separate articles." 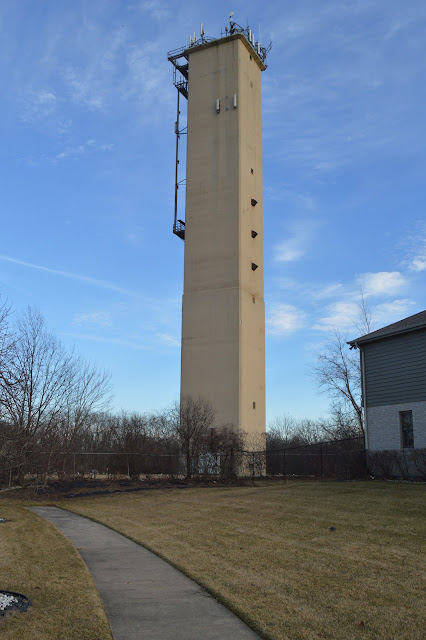 Several more photos are in the trip report.
Posted by Dennis DeBruler at 11:34 AM

Email ThisBlogThis!Share to TwitterShare to FacebookShare to Pinterest
Labels: communication