(no Bridge Hunter, Satellite)
While driving into Clarksville, TN from I-24 on US-79, I spotted an interesting bridge. When I saw it had a wood trestle approach, I found a parking lot so that I could safely turn back and check it out.

It is interesting to note that the satellite image shows that the Red River it goes over is actually red. 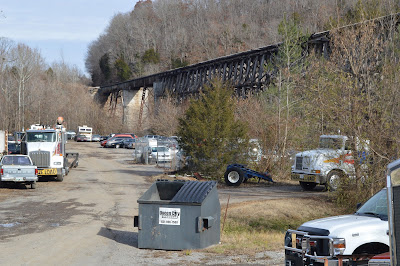 This shot focuses on the bridge over the river. 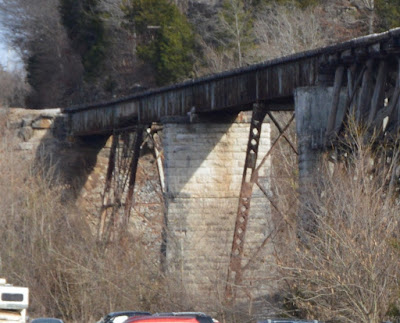 This is a digital zoom of the above picture. I include a 3D Satellite picture below to help illustrate that the bridge must have originally been two truss spans held up by a big cut-stone pier. Those trusses were replaced by still girders and additional steel piers, but they reused the stone pier. In the satellite image, note the logjam behind that center pier. Judging from the width of the stone pier, the original trusses must have carried two tracks.
Since Google is doing a good job with the 3D image, I include an overview that has the trestle as well.

Posted by Dennis DeBruler at 3:20 AM