(no CRJ, Satellite (no trace of where this tower was is left because the C&WI tracks have been filled in to remove the embankments when they made Ping Tom Memorial Park))
NorthAmericanInterlockings: photo
Chicago and Northern Indiana Railroad Interlocking Towers: looking northeast    looking south


The 16th Street Tower was part of C&WI's route between 21st Street Crossing and Roosevelt Road, which as the route to Dearborn Station.


Mark Llanuza posted two photos with the comment: "At 16th st tower this is where the Erie came into Dearborn station. By 1983 most of all the rails were rusted and Dearborn was removed only this section going under the Rock Island remained."
Mark posted again

One of the things that makes learning Chicago railroads challenging is that different railroads that passed a tower would have their own name for that tower. That is why there are two Western Avenue Towers in Chicago. Bob's comment below taught me that there are two 16th Street Towers. The other 16th Street Interlocking is about a block east of here.

In order for C&WI to get to Dearborn Station, which is east of La Salle Street Station, the five tracks of the C&WI and Santa Fe, which was a Dearborn tenant, took the low road and all of the other railroads were elevated around 16th Street.

The wall on the right in the above photo is the IC (Chicago, Madison & Northern, CM&N) embankment of the track that climbs from the 21st Street Crossing up to join the St. Charles Air Line (SCAL). Both sides of this embankment are now filled in so that the bridges in the background of Stuart's posting are now at ground level! It is probably filled with dirt from digging the basements and pilings of all of the new buildings that have been built south of the loop where all of the station and freight house tracks used to be. 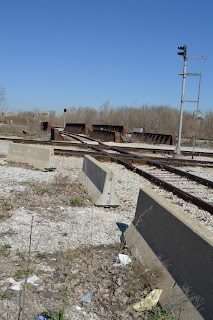 Here is contemporary view of those bridges. The tracks going across the picture in the middle are the CN/IC tracks. The track in the right foreground is the remaining connector of the two connectors that used to go between the SCAL and the Rock Island + NYC tracks. The bridges in the near background used to go over the two Santa Fe tracks and the bigger girders in the bar background used to go over the four C&WI tracks. The IC bridges over the Santa Fe and the Rock Island + NYC bridges over the C&WI tracks have been removed. Clark Street used to have an overpass over the grade-level C&WI tracks. But when the C&WI tracks were removed, the overpass was removed.

In the following track diagram, I added a red box to show the remaining bridge remnants that are now filled in with dirt and a blue box to show the Rock Island 16th Street (IC Clark Street) Tower. (Note that some of the lines show concrete embankments rather than tracks. There are a lot of concrete embankments in this area because there are elevated tracks very close to grade level tracks.)
This is an excerpt at 100% magnification. The yellow box highlights building 135, which is labeled Interlocker Tower.
The tower must have been rebuilt between 1938 and 1964 because it was square with the compass in 1938 but it was square with the tracks in the 1964 map.


Posted by Dennis DeBruler at 1:55 PM