In the 1980s, fiber optics had been developed well enough that they could be laid between towns. AT&T and MCI paid railroads for easement rights so that they could plow cable alongside the tracks and hang them from their bridges. This is the first time I have seen pictures of equipment that could plow the cables.


I presume that the blue, green, white, and red cables had already been laid along the tracks by other equipment that can hold unload spools of cable. Each of these cables would hold several fibers. Since multiple cables can be laid for about the same cost as one cable, far more fibers were installed than were needed at the time, and most of the fibers remained "dark." In fact, many wondered if all those fibers would ever be "lit up." But the "dot.com" boom did untilize that excess capacity. And, as Ernie shows, the growth of internet traffic requires more fibers to be laid.

In 1980 the Staggers Act was passed. This allowed railroads to easily abandoned unprofitable branches. And there were a lot of excess rail routes since trucks and Interstate highways could cover much more distance in a day than a horse and wagon. But the railroad charters granted in the 19th Century stipulated that if a railroad abandons a route, the right-of-way (RoW) land becomes part of the adjacent land from which it had originally been bought. This caused problems for AT&T and MCI because farmers would rip out the railroad embankment running across a  field so that it was easier to drive their farm machinery in the field. Ripping out an embankment had the side effect of ripping out any fiber optic cables that had been installed. Fortunately, for the rail-to-trail movement, AT&T and MIC had the deep pockets needed to hire lobbyist to get the laws changed so that a right-of-way remains intact even if the track has been removed. 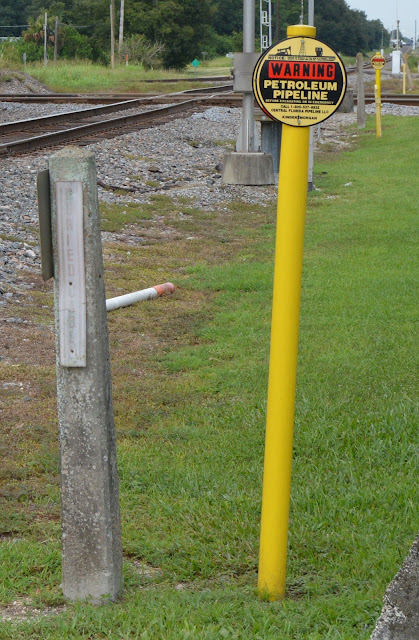 This closeup of a photo taken in Plant City, FL shows three utilities taking advantage of the railroad's RoW. The most obvious use is a pipeline. The sign on the concrete pole says "Buried Cable." No doubt this was a coax cable that is no longer used. The post remains because it is not worth the expense of removing it. Coax cable was the technology used to carry long-distance telephone calls before the microwave technology was developed. Fiber optics has now replaced most microwave towers. Retiring the use of microwaves frees up frequencies that can be sold to cell phone companies. (The reason the TV channels we used for decades no longer work is because those frequencies have also been snarfed up by cell phone companies.) In the photo, the white pole with an orange top used to stand straight up, and it marked the location of a buried fiber optic cable. 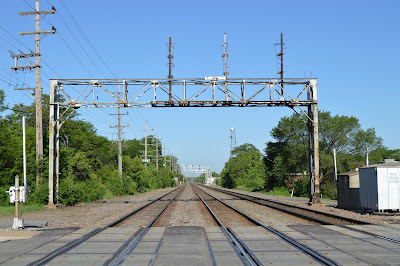 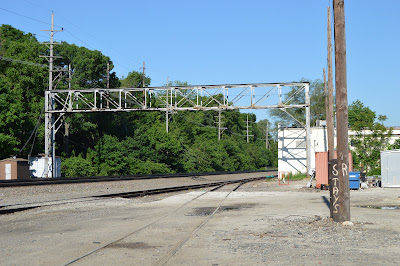 In this photo taken in the Downers Grove rail yard, I put a red rectangle around another fiber optic marker that is in front of the white building.

The code lines have already been removed from Downers Grove. But Marty Bernard has a photo that shows the old code lines in Westmont. How would you like to be a signal maintainer back then during a bad freezing rain storm? All of those copper wires have been replaced by the underground fiber optic cable.


Update:
Mike O'Brien added three photos to Joe's post with the comment: "CN had two of them, The one in the photo is the first one "Mountaineer I""


(new window)  I recommend skipping to about 2:30. It sounds like in parts the locomotive had to pull pretty hard.


Posted by Dennis DeBruler at 5:10 AM