This is a complete rewrite of my posting on Griffith Junction. Thanks to Wayne Hudak, I recently learned the tower was east of Broad Street. For the first three years that I was studying railroads, I thought it was on the west side. Griffith Junction was a popular railfan site since it had four mainlines and one branch line. Consequently, I have found a lot of pictures. So this posting concentrates on the junction and tower itself. Pictures that show (at least part of) a depot are in a Griffith depots posting. Photos of trains passing through the junction are in the appropriate Erie+C&O, EJ&E and GTW postings. Photos of trains on an interchange track or involving the NYC/Michigan Central Joliet Cutoff are still in this posting. Some photos are in more than one posting because they included multiple buildings. These are the most useful ones in terms of trying to visualize what the junction and depots looked like before the abandonments.

I got a copy of an historical aerial view while it could still be used for non-commercial use. The tower was the white roofed building southeast of the junction along the GTW tracks.
I marked the photo with the following convention:

The white rectangle east of Broad Street between GTW and Erie+C&O is the tower.

The above image does not show some of the details I was researching, so I did another search for the late 1930s photos. I didn't find free copies, but the image below more clearly shows that the town was north of the junction. This would make sense since the crossing gates for Broad Street must have been down most of the time.

The C&O tracks entered the area from the southeast. This 1916 map indicates the C&O crossed the Erie just south of the junction, and it had its own diamonds across the EJ&E, GTW and MC. It finally joined the Erie after its MY Tower Yard for the rest of the way to State Line Junction where it joined the C&WI to access Dearborn Station. (The joint Erie+C&O route shared a bridge with the Nickle Plate to cross the Grand Calumet River.)  Later, the C&O joined Erie south of the junction to reduce the number of diamonds that had to be maintained.
As an experiment, I increased the size by 150%. I still have trouble reading some of the street names. I believe the building to the left of the depot is labeled Trainmaster Headquarters.

John Del Vecchio posted three photos with the comment: "EJ&E tower in Griffith, IN. The EL, C&O, EJ&E, GTW, PC all crossed at this location. Tower was relocated to oppsite side of crossing."

This is the only photo I have seen of the Michigan Central Joliet Cuttoff being used so I'm not going to create a special railfan posting for it like I did the other railroads through here.
The EJ&E forked soon after it crossed the CN/GTW tracks. The tranks that went straight to Hobart are now gone. The tracks that curve north are the mainline that goes to Kirk Yard. The EJ&E track crossed the Michigan Central track that paralleled the Hobart-Griffith branch of the EJ&E. Wayne got off the beaten path and caught the EJ&E banging the MC diamond.

Since this photo shows two trains, it doesn't fit in the railroad specific postings so I put it here in the general junction posting.
Kevin Piper posted three images with the comment:


Griffith
This must be the craziest railroad intersection in the world. Griffith, IN. Five railroads converging in one area. EJ&E, GTW, EL, PC (NYC/MC) and C&O. Only two remain, and the junction is under CN control today.
I first visited Griffith as a young boy and it was an absolutely incredible place. I had a friend who's dad was an EJ&E track supervisor. There were derailments and other problems at Griffith almost every week, and my friend and I would go with his dad on weekends when things happened. I remember EL E8's tip-toeing over broken diamonds, and going in the cab of a derailed C&O GP9 at night. At the time, GTW and EJ&E were by far the most active. The only railroad I've never seen in action here is PC.
After I hired out on the EJ&E, I saw pairs of white Erie Western Alco RS-3's frequently pass through the junction.

Ed Benton At one time Streator Illinois had the Wabash, Santa Fe, New York Central, Gulf Mobile and Ohio, and CB&Q ALL crossing at grade within a 2 block area of each other. They all served the various coal and brick and glass plants all over town.
Dennis DeBruler And the CB&Q had two different routes terminating at this town: Ottawa, Oswege & Fox River Valley from the North and Illinois Valley & Northern from the Northwest. https://towns-and-nature.blogspot.com/.../streator-il...

Kevin also posted in Windy City Rails
Stan Stanovich ...I’m told that prior to the creation of Conrail that there was a headlight on the horizon on at least one of these lines 24/7!!!
Michael Riha One source said 180 trains a day in the 1950s.


My token effort at capturing EJ&E history. Here's some interior scenes of Griffith Tower when it was still in service on August 8, 1993.
By this time, of course, the C&O, Erie, Michigan Central, and the J's Porter Branch were already history.


David Dutro Nice pictures and memories John. I spent more than a few hours inside this place when it was up and running, next to State Line and Hohman Street it was the busiest place around, the Erie and C&O ran almost constantly, lots of interchange traffic as well.


Brian Skrabutenas posted 28 photos of the Griffith Junction scene from the 1970s.

Flickr 1974 photo of an eastbound GT from the tower.

Video tour of the tower. If I understand the comments correctly, a video of a CN/EJ&E local using the former C&O tracks as an industrial lead and a CN/GTW road train  running through the junction. Since CN now owns IC as well, the engine on the local is an old IC GP38.

Another video of the junction.

Lake Shore Model Railroad Association posted 16 photos with the comment:
6/8/20 Monday!!!
White still closed due to the 'Rona, we are able to get out about for some railfanning. Griffith, IN was busy today 6/8/20 as we caught all this from 3-5pm! CN, IC, KCS and QNS&L. 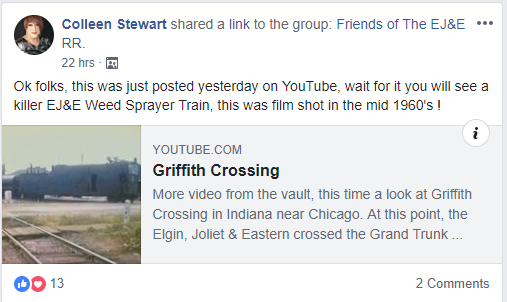 Gregg Wolfersheim The opening shot had one of the center cabs still running with it's Baldwin powerplants. The C&O with three SD7's riding on trade-in ALCo Trimount trucks. Some of those locos are still running on some shortlines!
(new window)
At 3:00 is a NYC train. So that would be on the Joliet Cutoff of the Michigan Central that paralleled the EJ&E to Porter and through the junction.
At 5:16 is the weed spraying. One did not ask if stuff was toxic and what it would do to the environment until the 1970s.
At 7:00, Erie was pulling piggybacks. That would be bleeding edge in the 60s.
At 7:06 is another NYC train.
At 8:03, grabbing train orders from the caboose from an ironman.

"Five rail lines formed the junction and more than 180 trains passed through daily, in what was one of the largest railroad interlockings in the world." [NWI Times Article]

Posted by Dennis DeBruler at 8:45 PM