(Bridge Hunter doesn't have a lot of information and it has a serious mistake, Satellite)

Three miles of water separate the metro area of Pensacola, FL from the Gulf beaches.

In 1931, the two-lane Thomas A. Johnson Bridge was built with a draw bridge over the navigation channel.
In 1960, the four-lane Phillip D. Beall Memorial Bridge was built with a high span over the navigation channel. The old bridge then served as two 1.5 mile long fishing piers until it was largely destroyed by Hurricane Ivan in 2004. In 1989, an allision by a barge forced traffic to use ferries for a few months. The state took advantage of this outage to widen the bridge for shoulders (emergency lanes). [Wikipedia]

The design life was 50 years and in 2010 it was deemed structurally deficient and would have to be replaced by 2016. [Wikipedia] It must have been functionally deficient also because the new bridge will "accommodate a total of six travel lanes, adjacent 10-foot shoulders, and 10-foot shared-use paths for bicyclists and pedestrians. Completion of the new bridge is currently scheduled for summer 2020 (or 2021, depending on source)." [PensacolaBayBridge] But the key date is 2019 when the eventual eastbound lanes will be done. All traffic will then be moved to that structure so that the existing bridge can be demolished to make room for the construction of  the westbound lanes.
I have not been able to find information on the height and width of the navigation channels of the current and new bridges, but the tied-concrete arch looks longer. The regular spans are increased from 53 to 150 feet. This not only reduces the number of piers needed, it improves the tidal flows and the ecosystem of Pensacola Bay. Not only does the new bridge used pre-stressed concrete, it uses additives to prevent salt intrusion. They will have to waste money on steel reinforcement and rehabilitation of the current bridge just before it is going to be torn down in 2019. Evidently it really did need to be replaced in 2016 as was predicted in 2010. It did survive the category 4 Hurricane Ivan that hit the region in 2004. [pnj-extend]

Residents of Gulf Breeze, the town on the sun-and-fun peninsula, are worried about the impact that will be caused by 3-lanes of inbound traffic being dumped onto the town. [pnj-public]
(new window)

(new window)  Skip to 1:54 for the construction process.

A pre-stressed concrete plant is being built at a shipyard that has been abandoned for decades. [PulseGulfCoast] In addition to the "trophies" pictured below, the pilings and 150-foot span beams use concrete. The piling test described below implies the pilings rely on soil friction, rather than reaching bedrock, for support. I haven't found a description of how the concrete pilings are capped so that they can withstand the forces of driving the piles into the ground. Normally large impact forces are used to destroy concrete structures.


Update:
A video from a cab by Mike Hurlburt. I recognized a couple of "trophies."


Mike Hurlburt posted three photos with the comment: "This here is a fun Girder setting Saturday y’all! Y’all have a good weekend and keep the shiny side up."
[I recognized the "trophy pieces" in the third photo before Pensacola was confirmed by a comment. From the comments, I gather this is an 888 ringer on a barge, and the girder is a light load for it.] 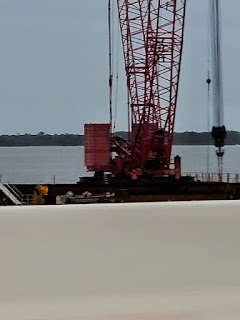 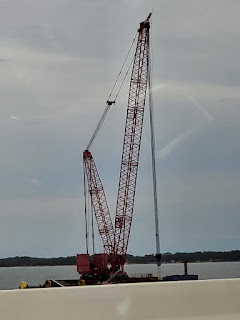 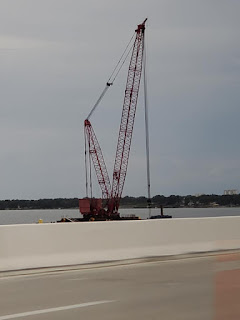 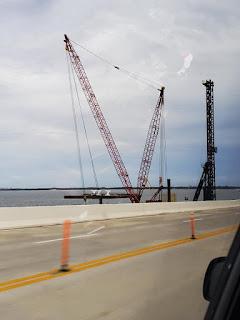 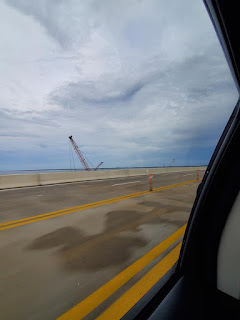 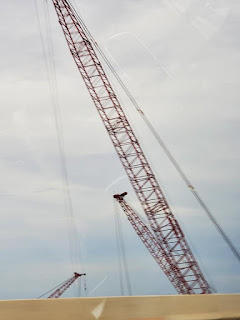 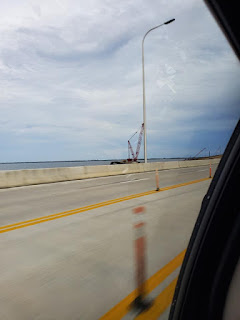 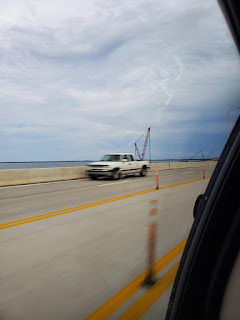 Drone video of the bridge damage done by several runaway barges  (source)  It doesn't start with the worse damage. At 1:43, most of a span is gone.

Posted by Dennis DeBruler at 1:47 PM