(Update: HAER;    MWRD video of the interior;
MWRD video of one of the original units. They no longer run. What you are hearing is the modern units that are in back of the videographer.
The MWRD built a canal with huge embankments for the sides to take advantage of the 40' drop of the Des Planes River in the Lockport, IL, area.
)


The Lockport Powerhouse, downstream of the Controlling Works. Under construction in 1907 and as it looks today with obvious changes in machinery.

The east half of the powerhouse still has the original 1907 alternators as preserved museum pieces.
The far two bays have had modern units installed. The other bays just use the pipes to help fine tune the flow of water through the canal. The foreground is the center of the powerhouse and generates the excitation current for the modern units. (Scroll down in that excitation current posting for several more interior shots of this powerhouse. It also explains why they switched from the old to new alternators.)
This is an overview of the powerhouse and locks. Google has several pictures of the complex. I found the one below on the Metropolitan Water Reclamation District site.

Note the black gates of the original small lock between the sluiceway and the new lock. When I first came to the area to work at Bell Labs in the 1970s, I visited the lock. But access is no longer allowed. Another item on the todo list is to find and scan those photos.

Update:
This is a view from the west side. The metal structure covers the bays that are used by the upgraded turbines and alternators. 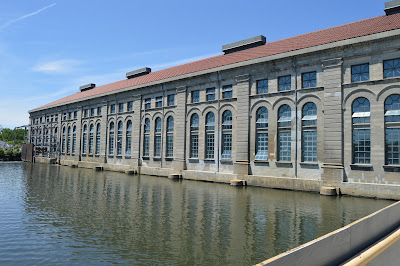 View from the east side.

MWRD posted nine photos with the comment: "We were thrilled to have @idotdistrict1 Steve Mastny visit us today at the historic Lockport Powerhouse and Controlling Works! "
Steve Mastny This was a total blast. Thanks very much Jennifer, Rebecca, and Marty for showing me around. Looking forward to doing it with the statewide group of Illinois bridge engineers in 2020.


The interior of the Lockport Powerhouse is seen in these photos, the first from after construction was completed in 1907 and the second from January 14, 2020. Located at the termination point of the Chicago Sanitary and Ship Canal near Lockport, the Powerhouse is used to generate electricity, prevent flooding, reduce pollution and maintain water levels for commercial navigation.In the older photo, a worker is standing next to one of the original seven horizontal generators which were used to generate electricity. In 1935, two of the original horizontal generators were replaced by vertical generators and the remaining horizontal generators were eventually phased out. The 1935 vertical generators were replaced by more efficient vertical generators in 1999 and 2001. These generators each have a rated capacity of 6.5 megawatts and together generate an average of 40 million kilowatt-hours per year (110,000 kWh/day).Electricity generated at the Lockport Powerhouse was originally sold to municipalities for street lighting. In the 1930s the MWRD began using it to operate its treatment plants. Now the electricity is sold back to the “grid.” Also included is a 1914 print of the plans for the Power House Floor and Gallery.

Posted by Dennis DeBruler at 5:52 AM