Update: While my daughter was driving me around Chicago so that I could take pictures, I shot a sequence from I-55. Fortunately, the camera was able to lock focus even though we were moving at highway speeds. It appears the third bridge is not totally abandoned. I wonder what they have planned for it. (Another Update: The third bridge is to help connect BNSF's Corwith Yard with BNSF's Clyde Yard.)

Later I made a trip to the boat ramp park to take some more photos.
It is embarrassing when the street view gets a better photo. And he even caught it with a train.
Even the bridge that was recently rehabilitated by BNSF has graffiti.
I caught it graffiti free, but I didn't dodge the vegetation very well. I do not like walking in weeds for various reasons. 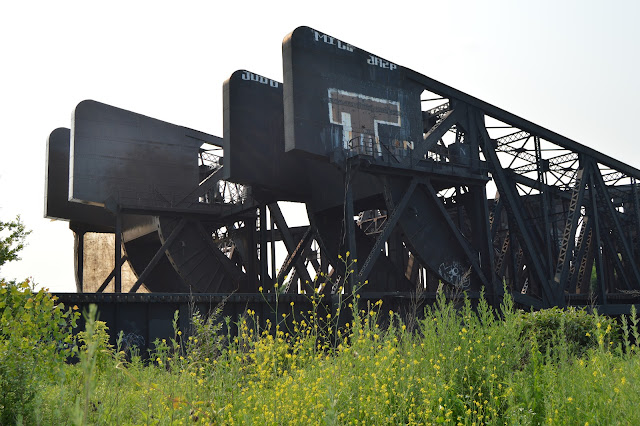 For decades I have wondered which railroads used the 8-track bridge that crosses the Chicago Sanitary and Ship Canal just west of Western Avenue Bridge. My study of the Brighton Park Crossing has answered that question. The bridges carry the Western Avenue Corridor across the canal. Originally, the 8 tracks, starting from the east side, were 2 tracks for the Chicago Junction Railroad (New York Central), 2 tracks for the Baltimore and Ohio Chicago Terminal, and 4 tracks for the Panhandle Route of the Pennsy. But one of the Pennsy tracks was not used.

Currently, the usage is 2 tracks for NS/NYC/CJ and 2 tracks for CSX/B&OCT. That is, only the 2 eastern spans of the 4 spans still have tracks on them.

Some sources refer to this as a Pennsylvania Railroad bridge because the Panhandle Route was the first railroad to build in this corridor. But these spans were built by the Sanitary District of Chicago. The official name seems to be Eight Track Bridge. But I like the "Scissors Bridges" nickname because of the unique design of alternating which side a span lifts from.

This is one of six railroad bridges in Chicago's list of 353 landmarks.

Update: I found a 1908 book on Scherzer rolling lift bridges that has photos of the bridges before the rolling segments and operating machinery was added. It specifies the skew angle as 68 degrees 21 minutes 40 seconds.

Since the bridges are changing, I record the image I obtained in 2016.

Randy provided two photos on a post with the comment: "I wish this bridge was 3ft higher off the water. It's the lowest bridge on the river and I always drag my antennas on the tug boat across the bottom."
The bridge is in the background of these three photos posted by MWRD with the comment: "Historical Photos of the Week: A three-part photo series! A truck is removed from the south bank of the Chicago Sanitary and Ship Canal, west of Western Avenue, on April 26, 1926." I wonder what the factory is in the background of the right side of a couple of the pictures.

This is the lowest fixed bridge at 17-feet on the Lake Michigan to Gulf of Mexico waterway. (The Chicago River An illustrated History and Guide to the River and Its Waterways, 2nd Edition, 2006, David M. Solzman, p.221) This surprised me because I have heard that the South Branch Bridge is the lowest. Then I remembered that they can, and do, still raise the South Branch Bridge. (Update: USACE lists it as 17.6')

The 8-track bridge is in the background of this GM&O transfer photo.

Twenty photos, most of them obtained illegally (tresspassing)  I was surprised that some of the machinery to operate it still exists.

Posted by Dennis DeBruler at 5:16 AM