(Bridge Hunter, Bridge Hunter Previous Historic Bridges) The above links indicate this 1949 bridge is the longest-spanning pony truss trunnion bascule bridge at 253.8'. That might explain why the part of the truss above the deck is so high. Most bridges I've seen so far of the "Chicago Design" have a truss height at the middle of the bridge comparable to that of the handrail. In this case it is about three times as high.

Google's Street View caught someone walking on the walkway. (Note the person in red about a third from the right.) That person provides scale as to how tall the truss is.

I had trouble finding pictures of the Scherzer Rolling Lift Bridge that was built in 1903 to replace a jack-knife bridge that was built in 1893 because the eBook reference I had found was from archive.org. Historic Bridges used Google's copy.
I was using the .pdf copy from archive.org, and it does appear that the clerk making the copy missed the two pages I am interested in. (I verified that the "Single Page Processed JP2 ZIP" file is also missing these two pictures. I then compared the two copies and determined that Google is missing some pictures that archive.org does have. But none of the missing bridges are in Chicago. ) So these two pictures are from the Google copy.

A picture in Historic Bridges that is of particular note is this one of an ocean going boat using the river. It illustrates the importance of replacing the old swing bridges with bascule bridges to remove the pier from the center of the canal.

Given that the bridge was locked in the closed position when I took this picture, the position indicator is a little off. It is also quite a coincidence that a scratch on the marker lines up with a debris line in the background. 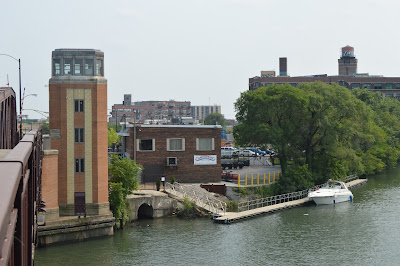 I have heard of Lawrence's Fish and Shrimp before. Now I know where it is --- southwest of the Canal Street Bridge. The sign on their building advertises "Dock & Dine." 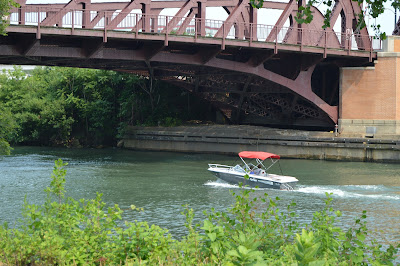 As with all other trunnion bridges I have shot, I can't get a picture underneath that is good enough to show the trunnion bearings or machinery. This picture does show that one reason this pony truss is so high above the deck is because it has such little depth below the deck. The shallow depth maximizes the clearance of the bridge.


Below is a west elevation view. The Canal Street RR Bridge is in the background.

Update:
Judging from the bends in the river, Patrick's picture is the west elevation whereas the CDoT picture is of the east elevation. The caption for the CDoT picture indicates the bridge was removed in 1902 because of maintenance problems and a replacement was not built until 1948. I had to stare at the pictures for a while before I realized the deck really is folded when "raised." The middle cables pull up but the cables to the center reel out so that most of the deck hangs down towards the water. Also, search ChicagoDrawBridges for Harmon for a picture of the first bridge of this design at Weed Street.

Posted by Dennis DeBruler at 3:22 AM