Photos of the new bridge in the up position.
An album of a lot of photos of the construction of the replacement bridge
Update: you can't see the bridge from the dam. But, thanks once again to power line corridors, you can get a couple of glimpses of it from the road going to the dam.


The Cemetery Road is tree lined but there is a gap where a power line corridor crosses the road and I found a safe place to park close to the gap. You can see from the EJ&E bridge over Cemetery Road that I'm pretty close to the railroad.

I went back to the car to get the telephoto lens. At least the power lines are less clutter than a bunch of trees. I'm not a morning person, but I need to go back and get a photo with morning light. Also, there was another clearing in the trees further East that I need to check out. 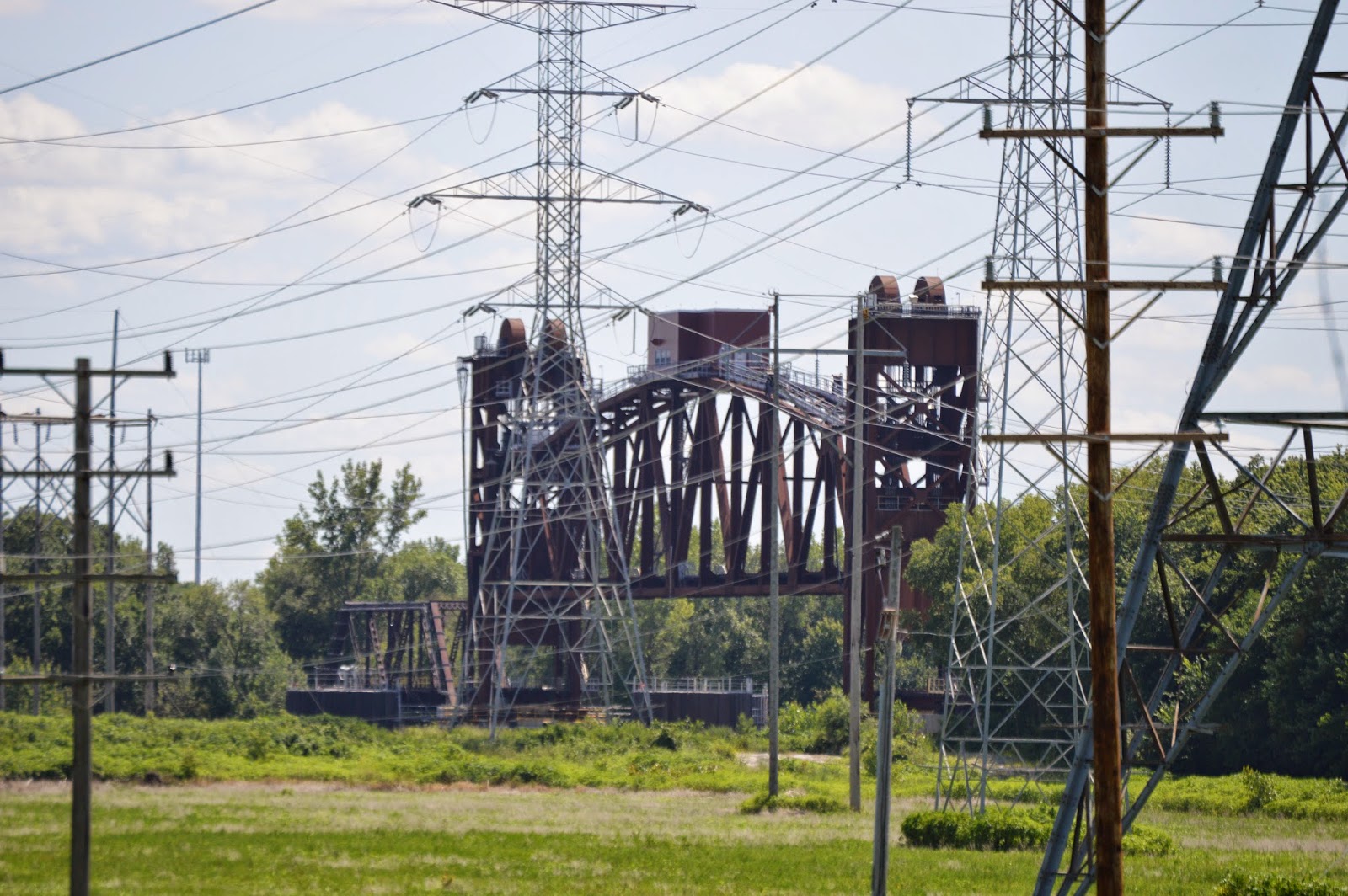 As you can see, the bridge is normally kept in the raised position. It looks like the conductor has to climb all the way to the top and center of the bridge to control it.

As John Weeks documented, this bridge was a navigation hazard because the lift span was only 120-feet wide and tows are almost 110-feet wide. According to Bridge Hunters, the old bridge was replaced by a new bridge in 2011. If you look at the "old bridge" link, you will see some pictures by Steve Conro of the new bridge being built. Google and Flash Earth show the new bridge, but Bing is still old enough to show the old bridge.

And by using the magic of Bing Maps, I got a more interesting view of the old bridge.

I read in some comments that there is only one industry that still uses this branch. According to Google, it is Reichhold. They must get an awful lot of raw resin and make a lot of paint to justify the expense of a new bridge.  Actually, I read in a comment (that I now can't find) that the bridge supports just 1 or 2 trains a week. I'm generally not in favor of industries using trucks, but the satellite photos show they already use a lot of trucks. So this new bridge does seem to be a poor use of federal (Coast Guard and Homeland Security) money.

I found a "Stations and Terminals" map from CN's map site. After switching from Firefox to Internet Explorer, I was able to zoom in to the branch that crosses the river. Reichhold are the tracks to the West and just South of the river. Clicking each of the red triangles starting from the Northwest we have East Morris, Beven, Divine, and Goose Lake. The branch to the east just south of the river is the Dresden Nuclear Plant, but I'm sure it does not get regular rail traffic. The lakes Southeast of the Goose Lake branch are from an old mining operation.  I came across a reference to Clay Pit so I assume they were mining clay. There were coal mines further south by Coal City, but a 1940 aerial view of this area looks like the material was removed rather than strip mined. In the image below, the railroad is on the left side and a branch goes to the East. Note that about only half of the land was mined by 1940.
I assume the reason why the Goose Lake branch line is still maintained is to have a Y that allows the trains to Reichhold to be turned. 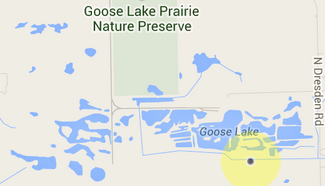 Update: an Illinois State Geological Survey map verifies that the mining operation served by the EJ&E Goose Lake branch was not coal mining. I'm still speculating that it was clay because I know there were brick and tile industries and pottery industries along the Illinois River that wanted clay. In fact, while I was researching strip coal mining, I read about a brick and tile company that mined a coal seam so that they could get to the clay seam that was under it.
Eric Berg posted several photos with the comment: "EJ&E Divine Bridge in 2000. Dad went with me to work 1 day and took most of these, he loved this location. I wasn't to thrilled with the whole height thing....." These are pictures of the old bridge.

I have in My collection a sign that came off the EJ&E rail road when it was torn down in 2011 , the EJ&E RailRoad was J P Morgan’s Rail Road that ran to his steel mill U S Steel,the Rail Road crossed the Illinois River at the Devine/ Morris area,Built in 1895 by the E J & E which was bought out by the CN in 208, the E J &E bridge has the distinction of being the most accident prone bridge in the United States,it was struck by navigation traffic 170 times between 1992 and 202,the problem is the lift span is very narrow ,allowing for 120 feet of clearance , the Dam just upstream creates a fast current, a tow that is 3 barges wide just barely fits through the bridge , the bridge was replaced in 2011 with a wider span for navigation.
I will try to show a picture of a picture of the bridge , and a picture of the sign when it was on the bridge , then of that sign that is now in My collection.

Rich Pagnusat: I never understood why the government spent all that money replacing a bridge on a weed line. I believe there is only one active customer south of the river. They probably want the option to haul away Dresden once they decommission the facility.

I found this comment on a K&S posting. I need to research if the GCC&N route is what went over this bridge.
Bill Molony: The EJ&E chartered the Gardner, Coal City & Northern to build from Walker south through Minooka, Devine, Dell Abbey, Carbon Hill, Coal City, Centerville and Mazonia to Coster in the 1880's in order to reach the coal fields in that area. That line was extended from Coster to South Wilmington in the 1890's. The southernmost 12 miles of the former GCC&N was abandoned in the 1930's.

Tom Hunter posted eleven photos of the old (skinny) bridge including a tow passing through.
I added Google and Bing links to the new and old bridges.
Al Pawloski Nice pics, Tom . Back around 1967 I remember learning to operate Divine bridge from Harold Watkins (who at one time, when that job worked daily, actually stayed in a little trailer just south of the river, on the east side of tracks). He was telling me how he once had to crawl across the bridge due to the strong winds. I dismissed that as an old man trying to scare me. It was only a few months later when I was leaving the bridge to get back to my car, and indeed I had to crawl on my hands and knees, with my duffle bag in my teeth, because the gusts were so strong. I later found out that wind gusts of 75 mph were recorded that night. Back then the bridge had wooden planks instead of the metal grating in your pictures (lucky for my knees). Also no telephone in the shack, just the old railroad line to the dispatcher. Had car trouble once and there was a nice old couple in a farm house, down by the road, that let me use their phone, to call a friend. Man, I'm old!
Michael Steffen The old Bridge 552 at Divine was the most struck Railroad bridge in the country. Tows would have to stop before reaching the draft and turn to line up for the passage. With three barges across, there was about a foot of clearance with each wooden fender. The bridge was a hazard to navigation and was on the governments list for replacement for years. The money was finally accrued and the replacement occurred, after CN took control. I was the bridge tender/operator one day during the early 80's when the south fender was heavily damaged. Frank Gabry (the Claim Agent) showed up to take pictures for the claim. He mentioned then that a replacement project was in planning stages.
Frank DeVries I somehow became in charge of the bridge job for signals on CN. They were well on their way to replacing the lift span when I left to go to "America's Railroad". CN management did not want the signal equipment. I was told in no uncertain terms were they going to upgrade signals. Could not get a word in edgewise that it would allow remote control of the bridge. Sigh.....
Michael Steffen Frank DeVries Doesn't make sense to replace that bridge and not allow it to be remote controlled, especially since the technology is so advanced.
Frank DeVries Its the CN. It doesn't have to make sense...

Brian Skabutenas posted 21 photos from when the River Line had a lot more freight including removing a piece of equipment from the Dresden Nuke Plant.
Posted by Dennis DeBruler at 5:05 AM