I thought I still had a dial-pulse phone. But I could not find it last July when I wanted to write this post. And I could not find a picture on the web that was not Copyrighted. I found older phones in a railroad museum. The kind you turn the crank and then talk to an operator. Also, the mouthpiece is permanently mounted to the phone and the earpiece is on a cord. That made me appreciate that, as a kid, I could at least move up to 10 feet away from the phone. Which meant that I had the option of setting down while I talked. But if it was a long distance phone call, there was no need to set down because the call needed to be less than 3 minutes. I bet you thought egg timers were used to cook soft-boiled eggs.

Now that I found my dial phone, I can write the post. And a Copyleft picture of a dial phone is now available for student projects on the history of the phone. (Students, be sure to search the web for "Strowger". It is the original central office equipment that caused the invention of the dial-pulse phone. See this Video for an example of a switch in operation. If automated switching equipment had not been invented, there would not have been enough women to fill the needed operator positions. And another tidbit is that operators were originally men, but the industry soon learned that women did not spend as much time fighting with each other. Oh oh, I'm going stream of conscience -- one thing we learned at the Caterpillar visitor center in Peoria, IL, is that mining companies now hire women instead of men to drive the huge trucks in mines because they don't tear them apart with their driving. I wonder how many men have tried to pop a wheelie with a two story dump truck.)

In addition to a dial-pulse 500 desk set, I included a touch-tone 500 and a more modern phone that still needs a cord. If I ever see a pay phone again, I need to grab a picture of it also. The beige wire was the standard 7 feet. The green wire was originally the wall phone in our kitchen and would stretch to 13 feet so you could reach the refrigerator and counter while you talked.

The more modern unit above had a microprocessor and a speaker, so the reason for talking about a phone "ringing" had disappeared -- bells. Below is a picture of the dial-pulse phone with the cover removed. 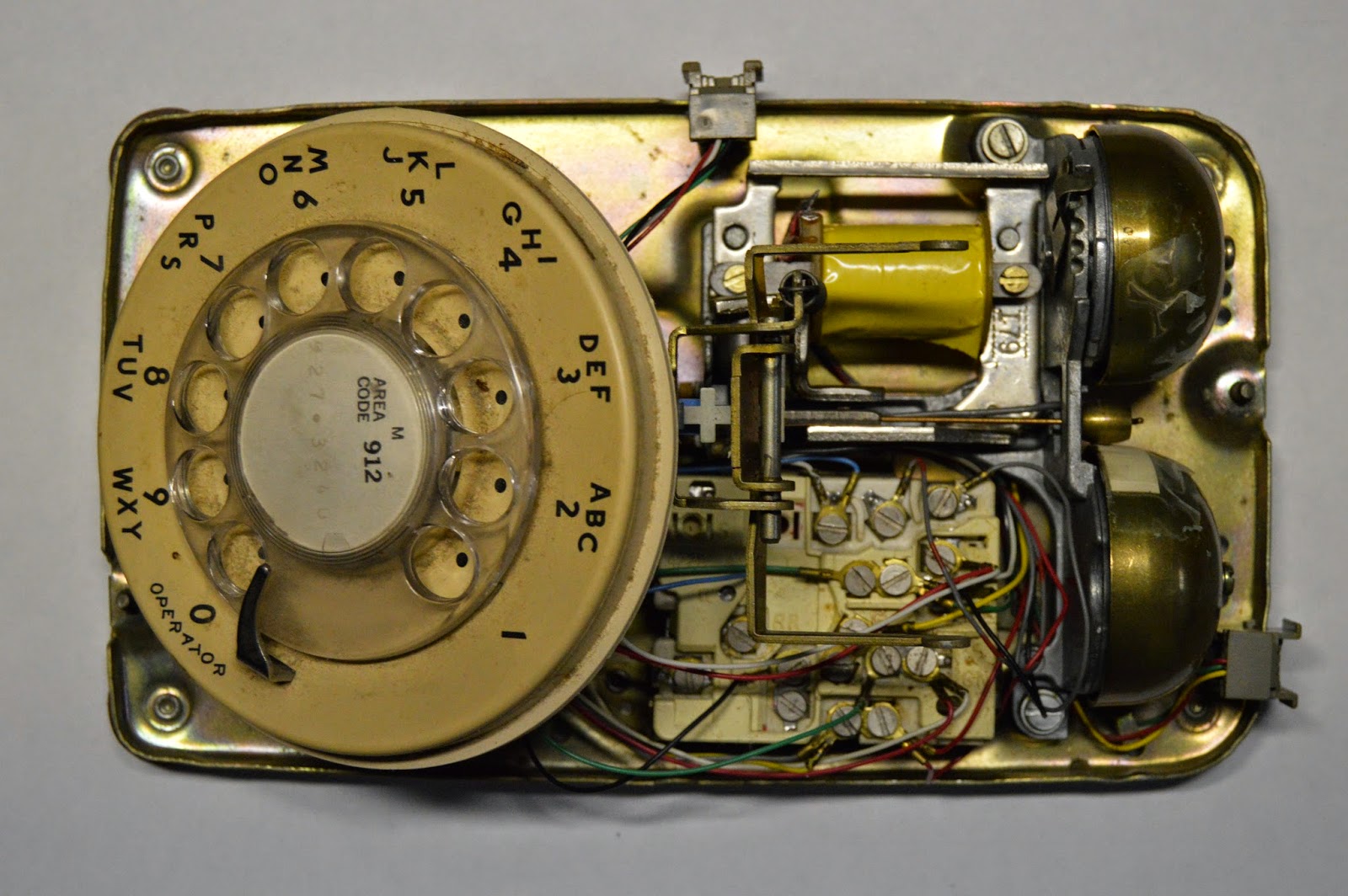 So the "alert tone" of an older phone was metal mechanically hitting metal. Not some microprocessor playing a tune with a speaker. The yellow cylinder is a solenoid that responds to the 48-volt AC ringing current to create a magnetic field that moves the clapper.

Since the easiest way to make an audio recording in the 21st century is to make a video, that is what I did. I had to use two phones in the video because I discovered that the dial-pulse phone will no longer ring. And it is not because someone taped some padding on the bells. I had removed that before making the video.

While making the video, I discovered that I can't make a call with the dial-pulse phone. I was surprised because the phone company used to maintain upwards compatibility. Then I remembered that I now get my phone service from the cable company instead of the phone company.

I've always wondered what kids think when they hear someone say "dial the number." When I tried remembering if I have ever heard someone use that phrase, it occurred to me that kids don't even make phone calls. They text instead.


At one of the Illinois Rest Parks along I-57 I noticed an Illinois Bell sign about a pay phone. So I looked for it on the inside:
This is the first time I have seen one in good condition. Before the development of cell phones, they used to be in many gas stations, drug stores, or on a special stand on the corner. I don't remember ever seeing a phone booth.

Unfortunately, it did not occur to me until I wrote this that the sign itself, "Illinois Bell" is also history. I wish I had taken a picture of the sign.

While waiting in the grandstands at the 2016 Sycamore Steam Show for the Parade of Power to start someone commented about an old phone. And then I saw what they were talking about (below). Someone had probably just bought it at the flea market and was carrying it back to his car. I assume the ear piece and cord is in the bag he is carrying. 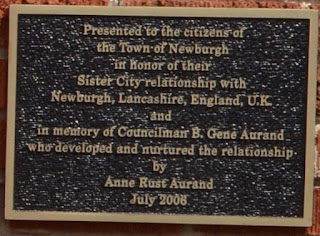 Ryan Sisson posted three photos with the comment: "Interesting find today... tried looking up by patent numbers.. got nowhere. .. anyone one on here have an idea? Patented oct. 31 1883 and April 30 1907"

Douglas Kephart provided three comments on the above posting:


A video on how to use a dial phone from Patti Garland.

On the other end of the dial pulses were step-by-step switches:


If automated switching had not been invented, then eventually every women in the US would not be enough to handle the call load.
I was thinking just the other day that I have never seen a photo of a "wall phone." In the house I grew up in, a wall phone hanging in the kitchen was the only phone in the house. And when we first moved in we were on a party line with 10 houses. And it was dial pulse. When we first moved in our current house (over 40 years ago), we had a wall phone in the kitchen. But we found a 15-foot coiled cord for it so you could work at the kitchen counter or raid the refrigerator while you were talking on the phone. And we had other phones in the house. Now we have a base station plugged directly into our cable modem. The base station supports five cordless handsets so we no longer use any of the phone wires that are in the house.

I post another picture of a touch phone because the posting has a lot more photos in the comments. And the comments also have animated gifs of phone dialing.

Posted by Dennis DeBruler at 4:43 AM