Update: The project was completed July, 2015.

I was headed back from Indiana on a Sunday, so instead of taking my usual route of I-80 to I-294, I went North on I-94 to the 130th street exit. (I try to limit my visits to the big city to Sunday's because of parking, traffic, etc.) I wanted to check out the progress of the CREATE GS15a grade separation project that required moving a big truss bridge a couple of years ago. I had noticed that they had closed Torrence Avenue over 2 years ago but had not started any digging for the underpasses. If you look at a map, you will see that this closes one of the few north/south roads in the area. But they seem to be in no hurry, they are not paying for Sunday overtime. After two years of construction, they appear to have 3 of the 4 legs of the intersection dug, but they haven't started on the fourth leg yet. Construction of the new Norfolk Southern (former Nickel Plate Railroad) bridge looks completed.

The big truss bridge carries the Chicago, South Shore & South Bend Railroad whose nickname is South Shore Freight. It is the last remaining active interurban railroad. Its interurban heritage is very evident in Michigan City where it still runs down a street. After their most recent bankruptcy in the 1980s, the freight and passenger operations were separated so that the freight operations would be a viable company by removing the losses from the passenger operations. Freight is operated by South Shore Freight and the commuter service is provided by the Northern Indiana Commuter Transportation District. The track is owned and maintained by the NICTD. The freight operation pays for track use rights. This explains the South Shore Freight name that I saw on the locomotives as I drove along the construction on 130th before I got to the intersection: 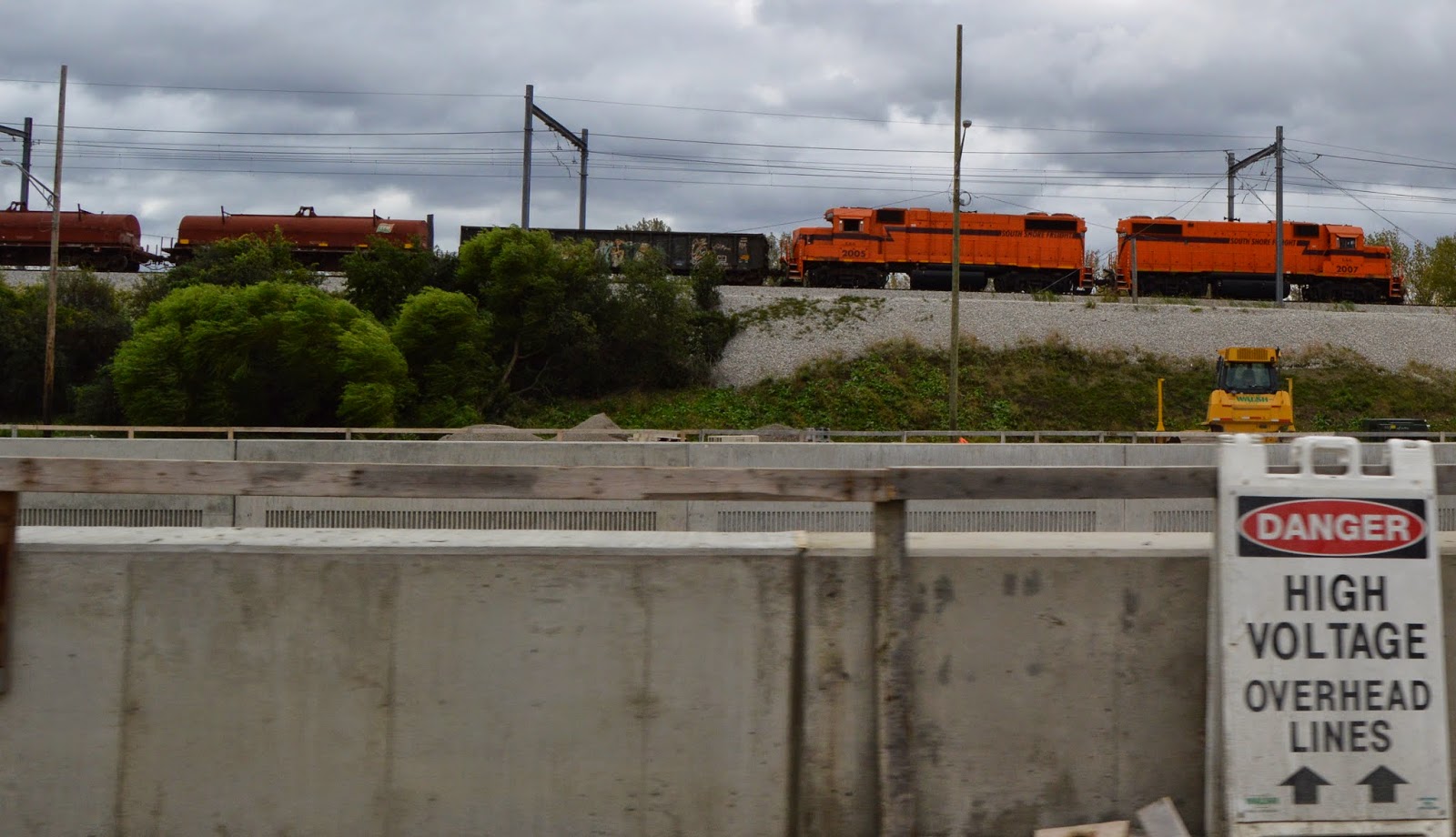 Zooming in on the engines, we see they are 2005 and 2007. According to The Diesel Shop, these are GP38-2s built in January, 1981. I also found a list that includes the electric locomotives used on the line.

The railroad used to use electric locomotives for freight service until 1983. One of their Little Joes has been preserved at the IRM. It is so big that they can't house it in their display barns so they repainted it for preservation with paint, equipment, and expertise provided by Sherwin-Williams.


Back to the GS15a construction. One of the reasons justifying the expense of the project was to retain the 4000 jobs at the Ford assembly plant in the northwest quadrant of the intersection (satellite). (It appears the assembly plant does not get any auto parts via the railroad. All of the industrial spurs go to the American Sweetner Corp.) A freight train blocking the road for 20 minutes not only interferes with employees getting to their parking lot, it backs up cars coming off the assembly line from getting to Ford's Shipping Yard (satellite). Looking at a satellite image, the shipping yard is clearly south of the intersection. In fact, when I zoom in on the first picture above, you can see vehicle-carrier cars parked in the yard to be loaded.

So how has Ford been getting their new cars from the assembly plant to the shipping yard while construction is in progress? The posted detour takes you down Brainard Ave. to Burnham Ave. and then back along State Street and Torrance Ave. That is a long ways. I'm surprised they are not working on the intersection on Sundays. To add to the pain of the detour, we were stopped by a northbound coal unit train crossing Brainard (satellite). And I was reminded that the freights in this area move sloooowly. I'm beginning to appreciate that the freights through Downers Grove move pretty fast. The depot on the right of the picture had a "Hegewisch" sign on the end. 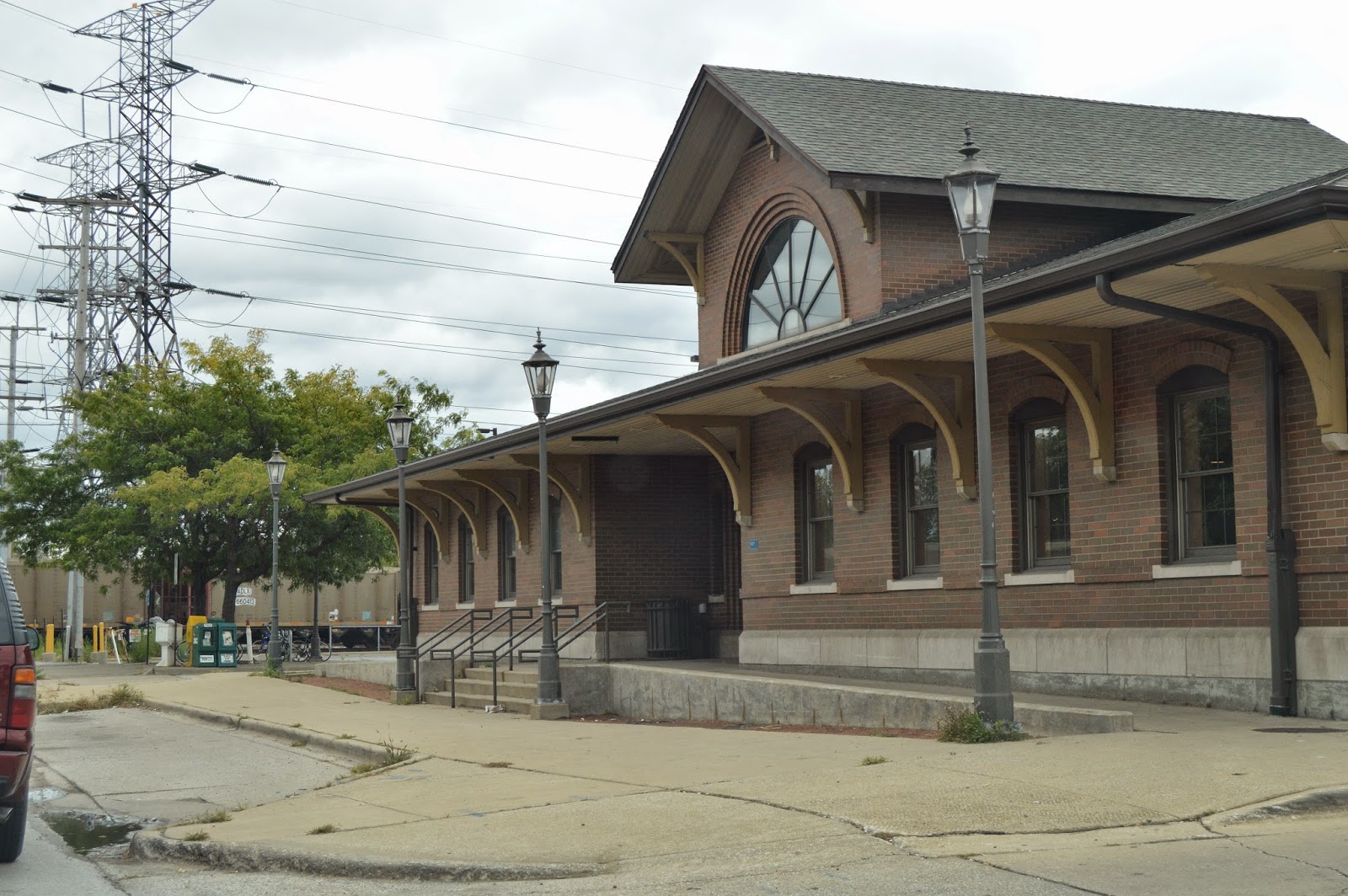 I have not been able to figure out who owns that track. (Update: it was the PRR's South Chicago & Southern (Bernice Cutoff), and it is now operated by IHB and/or NS.)

Update: The brown bridge that has been added is a pedestrian crossing.

Thanks to the red light, I had plenty of time to take pictures. 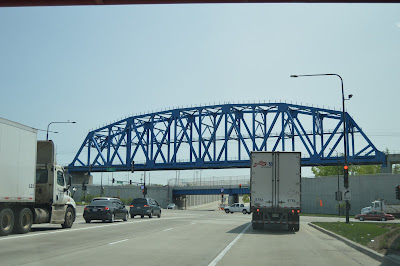 Back when the Chicago South Shore also handled the freight.

This is what it looked like with the old South Shore bridge and the C&WI tracks still paralleled the NKP tracks.
Posted by Dennis DeBruler at 2:12 PM