Nick Goedecke posted two photos with the comment: "Northbound through Springfield at 12:08 with CSX power on point."
Daniel Fulton Those are some decent sized rocks. I'm jealous that you have a sidewalk without moron fencing, even if only because there isn't room on that side.
[So large rocks, as well as old ties is an example of a material that can't be handled by a dump train and that needs a Multipurpose Machine.]


When I was on my way to a festival to get pictures of antique tractors, I noticed a freight train parked on the Belmont overpass. At first I thought it was a covered-hopper train. But when I saw it was a mixed freight, I turned onto Burlington Avenue to investigate. First I headed West. I determined it was an eastbound train because I found the end. So I turned around and started taking some pictures through the tree line. After just a couple of pictures, I learned that my battery was dead! So I don't have any pictures of the four locomotives that were setting next to the Downers Grove ex-roundhouse area.

The battery was still showing a green bar, so I'm going to have to RTFM (Read The Fine Manual) concerning the battery indicator again. But I was back out on the road again after 1.5 hours of battery charging. (I'm so glad I discovered the dead battery a mile from home instead of after I got to the festival!) The parked freight was gone, as I would expect. But that parked freight confirms that BNSF has moved the hole from Lisle to the west part of Downers Grove after the Belmont overpass was completed. The hole used to be in Lisle because Lisle is in the East DuPage River Valley, and the railroad is naturally elevated across Lisle. That is, all of the road crossings in Lisle are grade separated. The new location for the hole would explain why the Amtrak train that I saw crossing Main was going so slow and the engines were working so hard. It was probably restarting after being parked just a few blocks to the West.

I parked in the parking lot of the old lumberyard (now a landscaping company) to take pictures of the Herzog MPM MoW train that was parked on a siding. Below are views looking East, and then West. I did this at 18-mm so the unit on the right of the first picture is the same unit as the one on the left of the second picture. So the articulated car has 6 units. Note that there is a rail between the cars over the trucks. In fact, you can see that a rail goes across the top of all the cars. That allows the gantry crane that you see parked at the far end to roll across all of the units as it unloads or loads cargo (ties, brush, etc.). 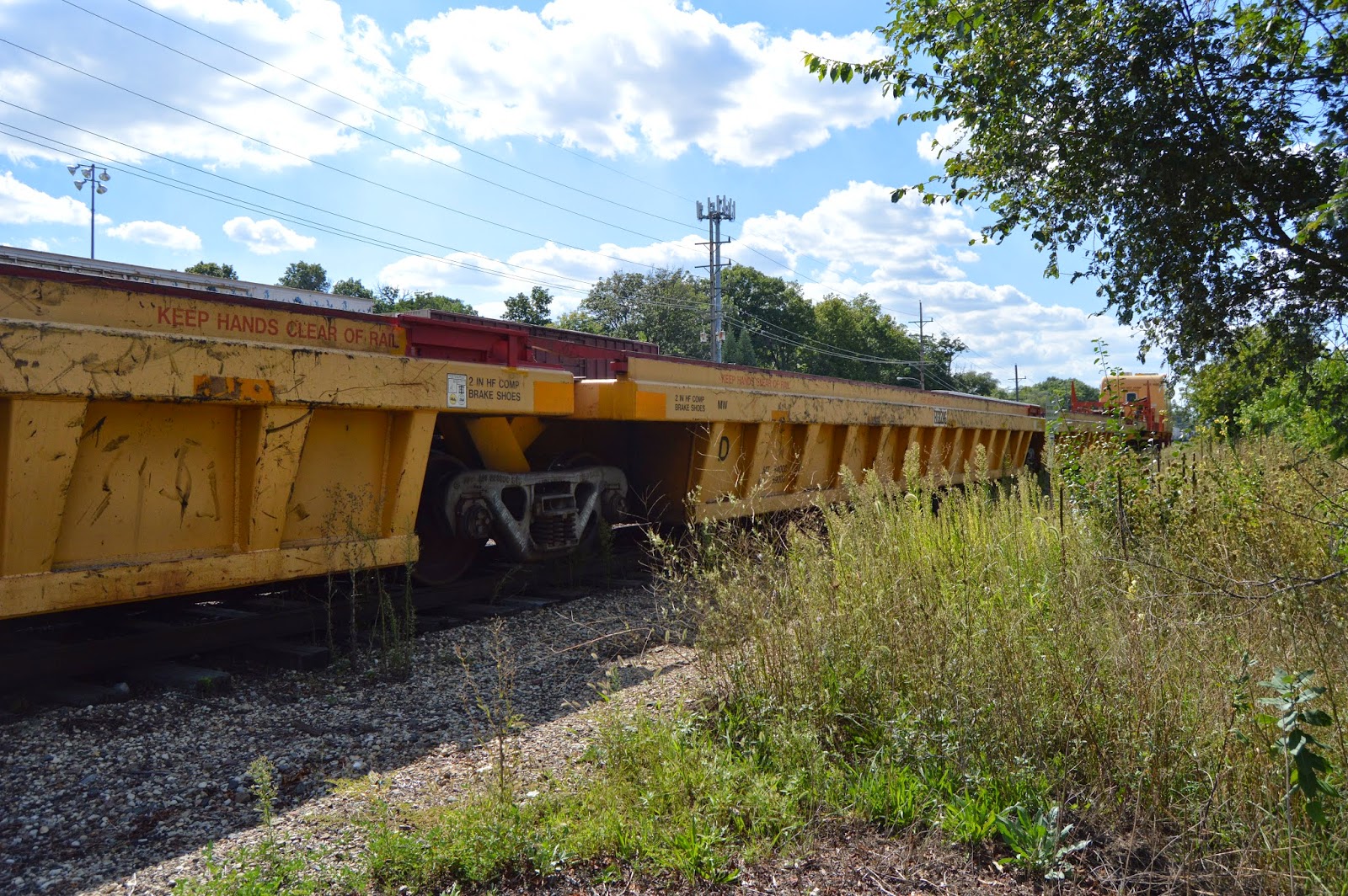 Note that in both pictures you can see little strips of white and brown above the cargo cars. That is because another eastbound mixed freight went past while I was taking pictures of the MoW train. That means the two trains I saw were 100% mixed freight. This is very unusual. I normally see unit trains (tank, coal, covered-hopper and intermodal). I'm sure the high percentage of mixed freight had something to do with it being a Sunday. But is it because the commuter traffic is much lower or because the inter-railroad traffic is lower and it is easier to transfer the mixed freight trains to the BRC Clearing Yard? Or both? 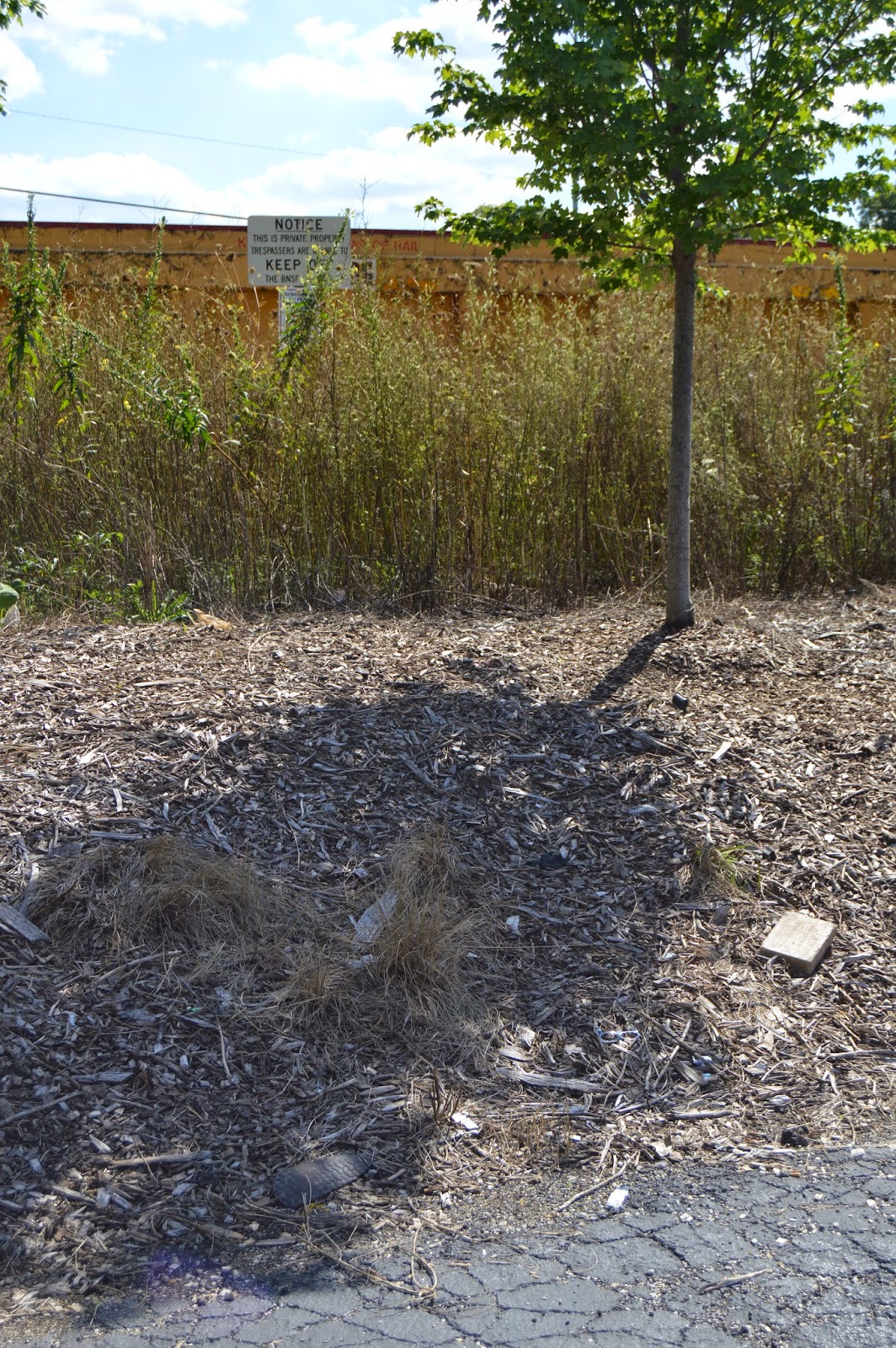 This picture was taken from the parking lot of the old lumber yard to note that the trespassing sign is behind the old team track lead. Unlike Norfolk Southern and CSXT, BNSF normally doesn't post trespassing signs. So they want to be clear that they have disposed of the team track land. Since the parking lot is already bigger than the landscape company needs, there is no need for them to pay to have this grade removed. So I'm going to give some thought to asking the landscape company if I can use the corner of their parking lot to take railfan pictures. Maybe even take a lawn chair with me since Downers Grove is a quiet zone and this is several blocks away from crossing guard bells


To emphasize that BNSF normally doesn't post No Trespassing, I first tried railfanning from an access point at the west end of Burlington Avenue. There are no signs. And I carefully parked close to the rode and on the side of a very wide access drive. But when a BNSF pickup truck pulled in later, it stopped and the driver asked me what I was doing. When I said taking pictures, he said I couldn't do that here. And then he went on down that access road. But I left anyhow.
Posted by Dennis DeBruler at 4:32 PM