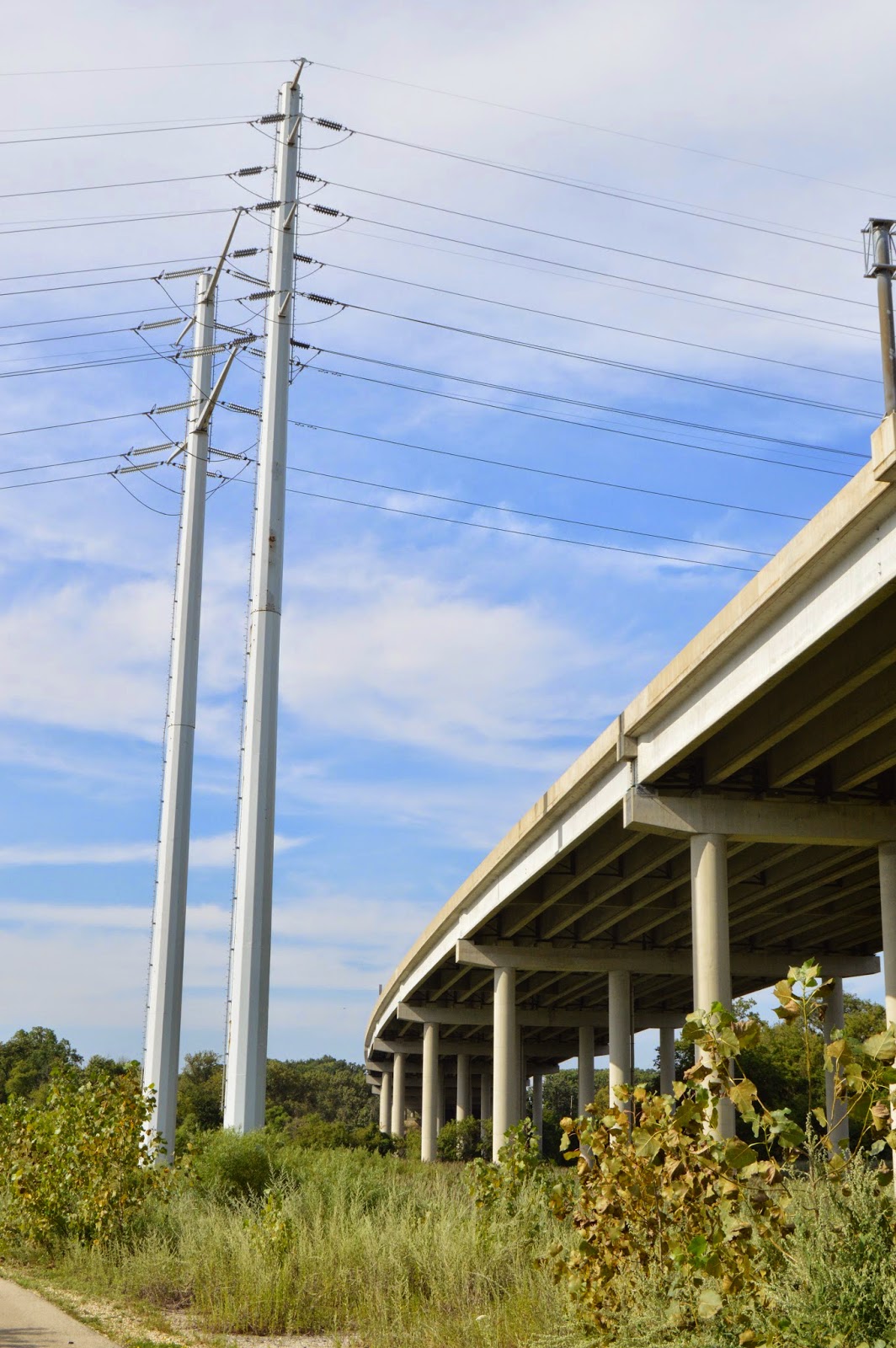 During the same day I came across the tallest and shortest electric transmission towers that I have ever seen.
(Update: my first post about power lines)

First was the tall towers along the trail by the I-355 Des Plaines Valley River Bridge.  Note that the bridge itself is 80-100 feet in the air. So those towers are probably around 200 feet. 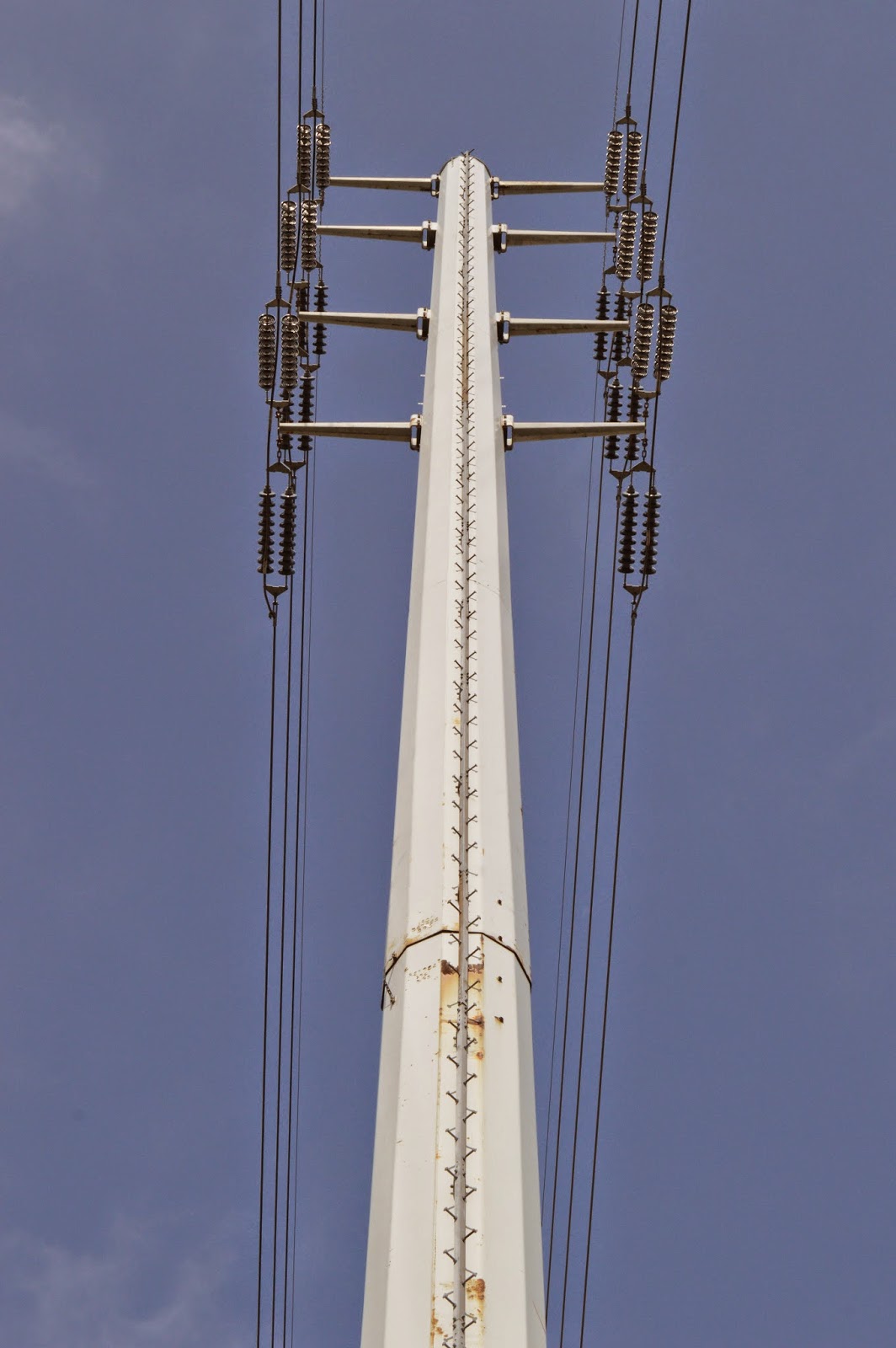 Note that the ladder has the pegs at a 90 degree angle instead of 180 degrees. I wonder if the workers  can unlock something and turn both rows of pegs 45 degrees toward the tower. And, as I expected, the permanent ladder does not go all the way down to the ground. Since the workers would have a key to the access gate, it would be easy for them to truck in a ladder to the site to start the climb.
The base of those towers are over 6 feet in diameter. 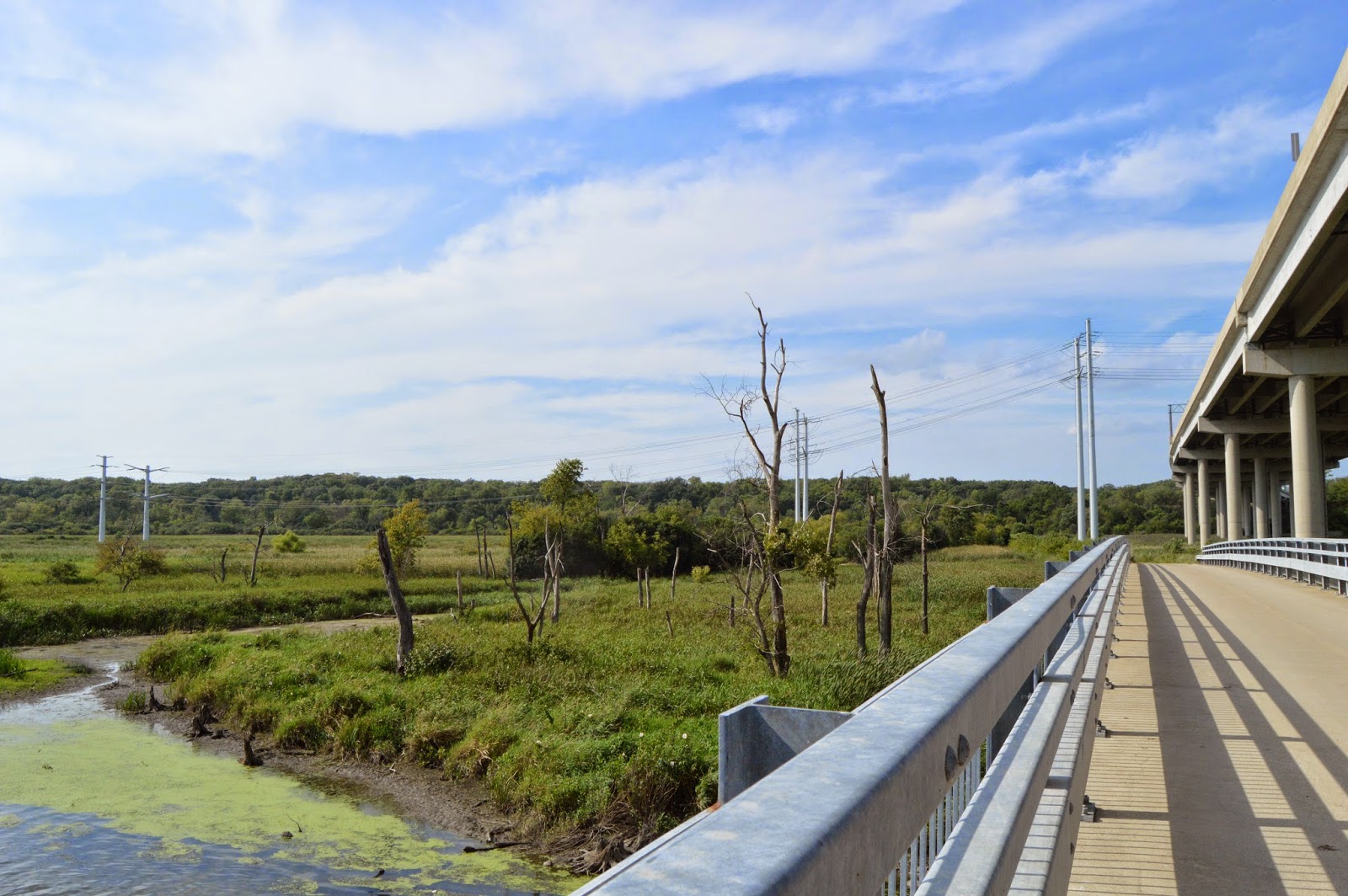 An overview shot shows the towers that transition the line up to the tallest towers. And the shot below shows the steel truss towers that were used before they built the bridge. 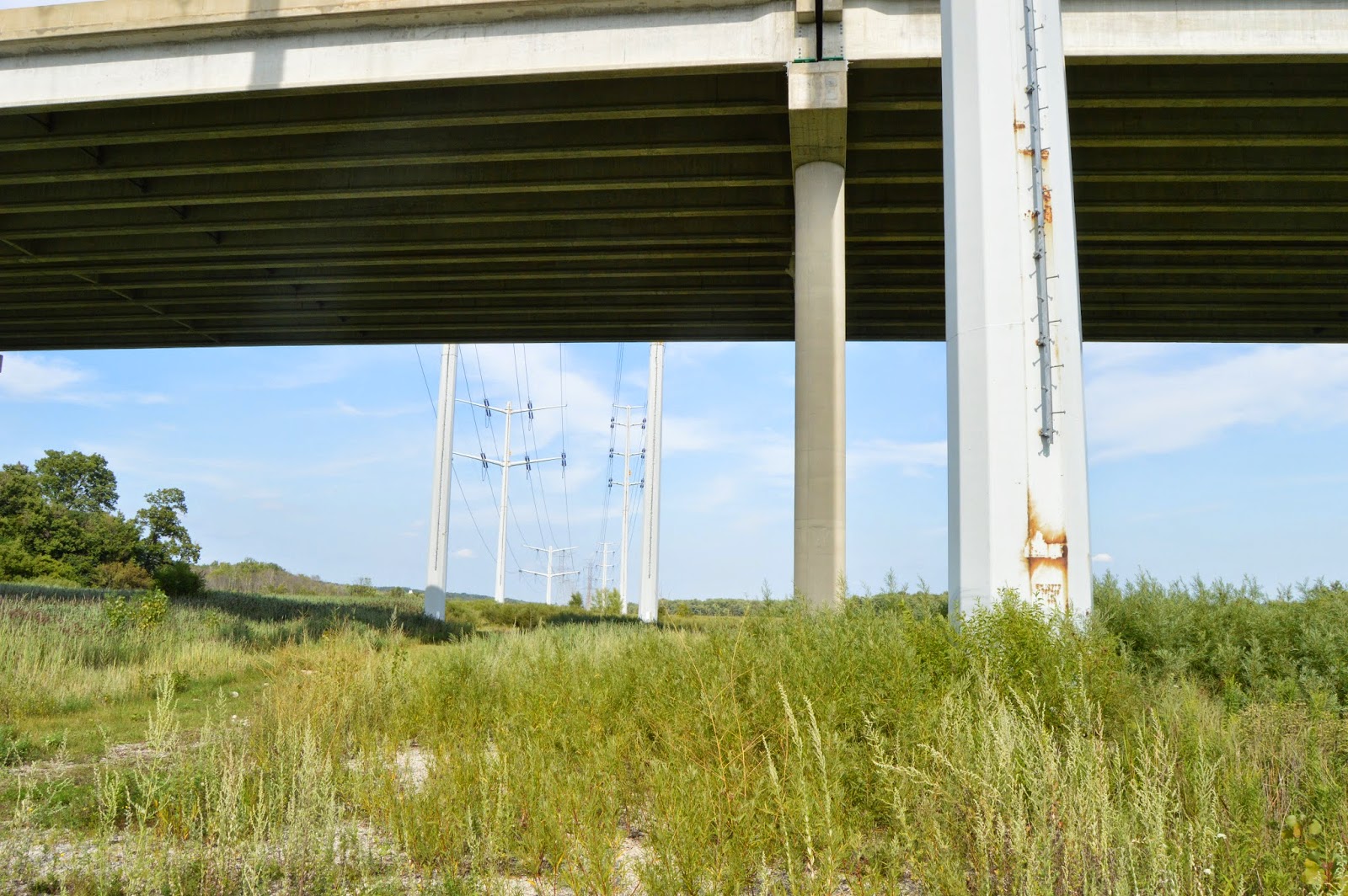 I spent some time trying to figure out why they went over the bridge instead of under it. I've seen special low towers used tow lines cross each other so that one line can go under the other. Did the forest preserve insist that they stay in their old footprint and the bridge designers could not move the pier a little bit one way or another? And then I remembered that the bridge had to be raised 10-15 feet to clear the flight range of the Emerald Dragonfly. Those wires are carrying a high enough voltage that the dragonflies probably need not fly directly into a wire to have a bad day. Thus the wires went over the bridge instead of under to avoid impacting the dragonflys.

Update: a view of the towers from a bluff.


Later that day when I was in Lemont getting pictures of the other high-bridge in the area, I was down by the canal next to the Santa Fe bridge and I spotted an old, rusty tower that is no longer being used. Since the insulator had only a couple of discs, it was a rather low voltage line. It looks more like today's distribution (what goes down your backyard) voltage of 12 kVA  than a transmission voltage. So the lines were really old. Thus I think these towers were part of the original line that carried power from the Lockport Powerhouse to Chicago. The powerhouse became operational in 1907. AC power and long distance transmission was still rather new. (Update: the towers are bigger than I guessed. They are 60' tall and the insulators have a diameter of 14" and are rated for 60 kVA. The line ran at 44 kVA. [reference.insulators.info provided by Bob Lalich (Facebook)] And this reference confirms this was the sanitary district power line and that it was bleeding edge in its day.)

I've been down by the bridge several times. In fact, it is the first place I went when I retired and started this blog. I'm embarrassed that I never noticed this tower before. I looked around to see if I could find more towers. There is another one upstream from here. I got up on the approach for the old Lemont Road Bridge and found the following view that includes both towers. You can see from the bridge and the tops of the barges that these towers are located close to the Chicago Sanitary and Ship Canal. 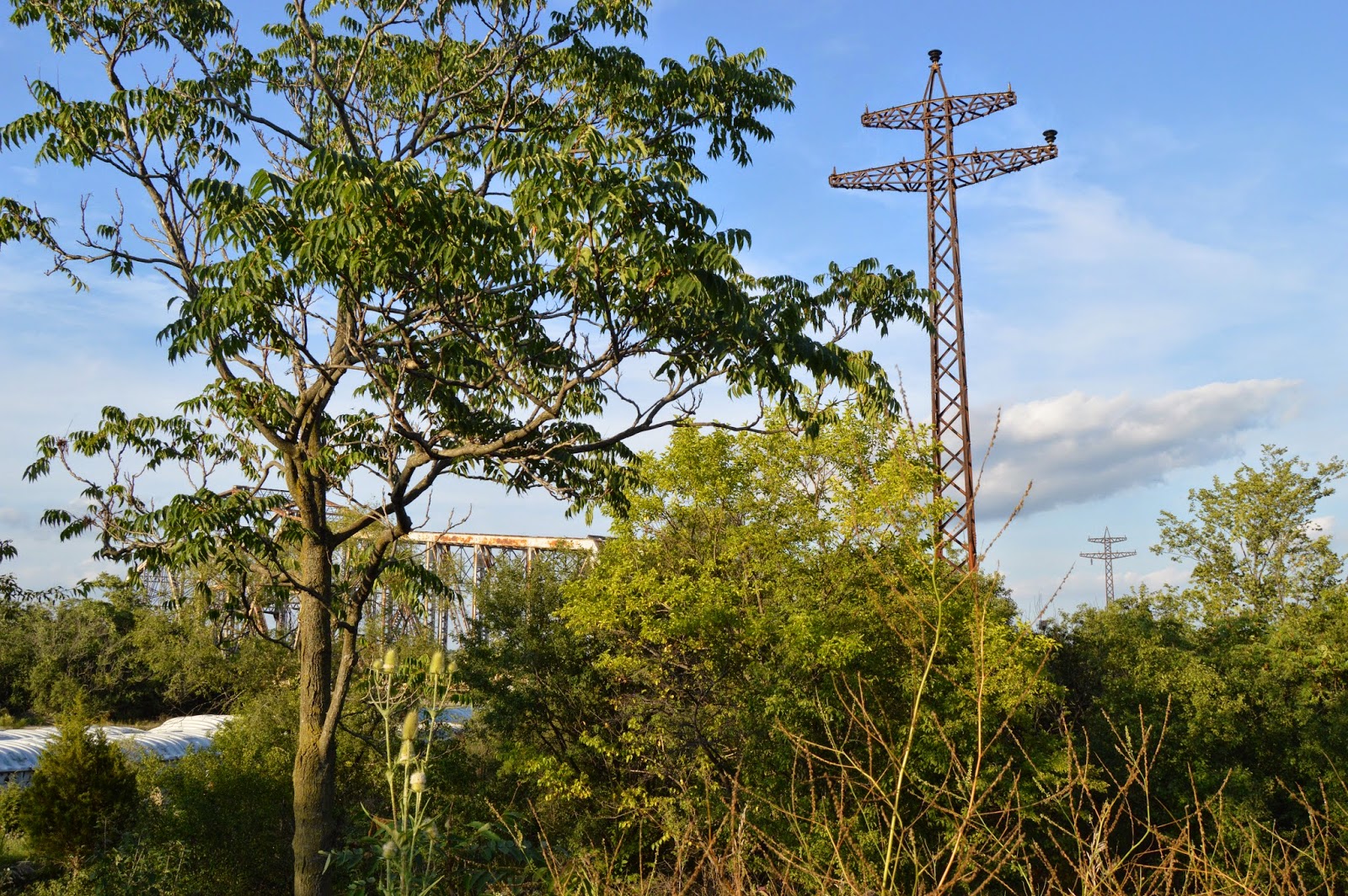 Later, when I was on Canal Bank Road between Harlem Avenue and a Santa Fe Railroad Bridge, I spotted another old tower in the tree line between the road and the canal. So I drove the whole distance looking for more. I found just three. And they were adjacent. This shot was looking upstream. 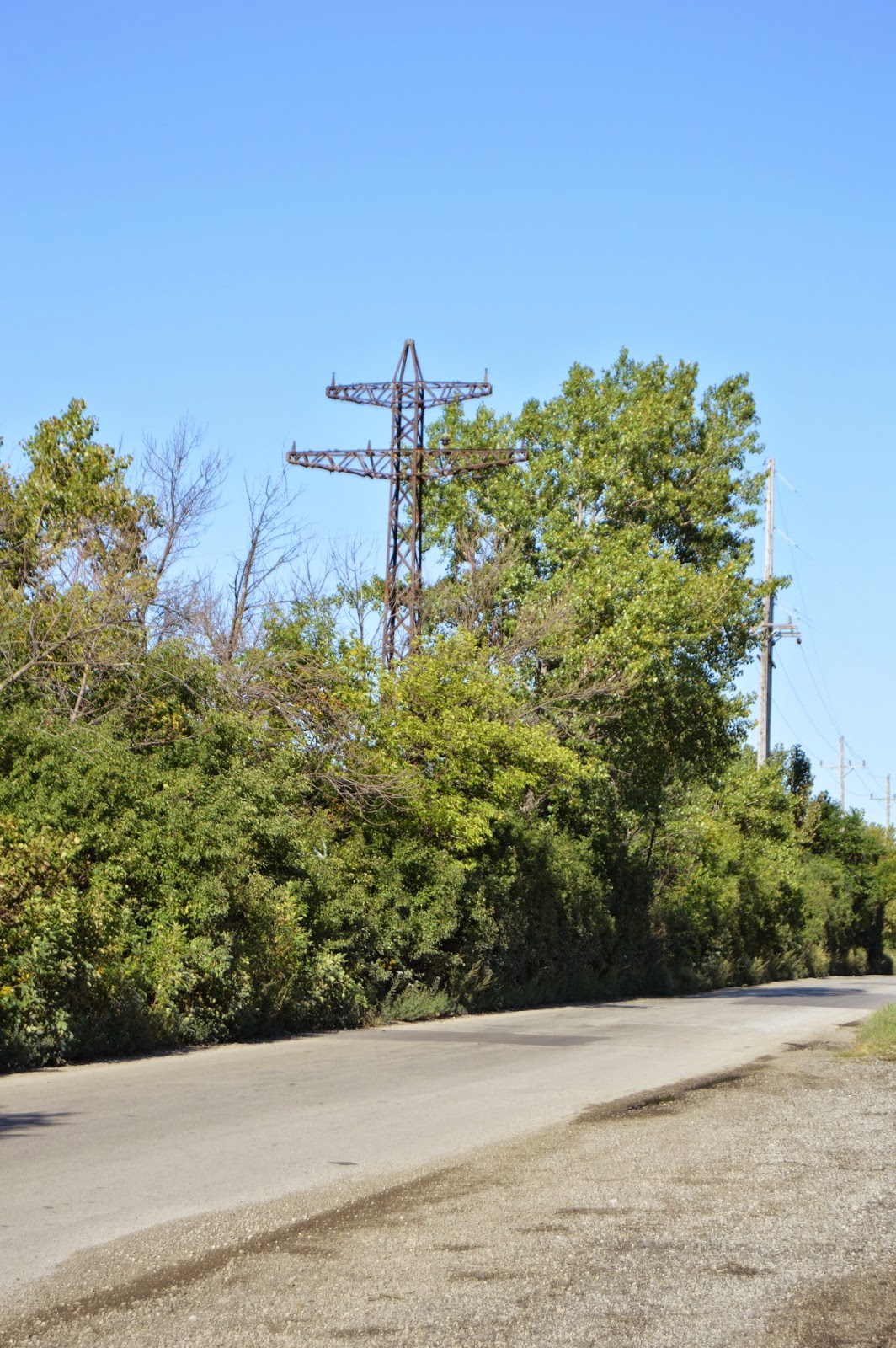 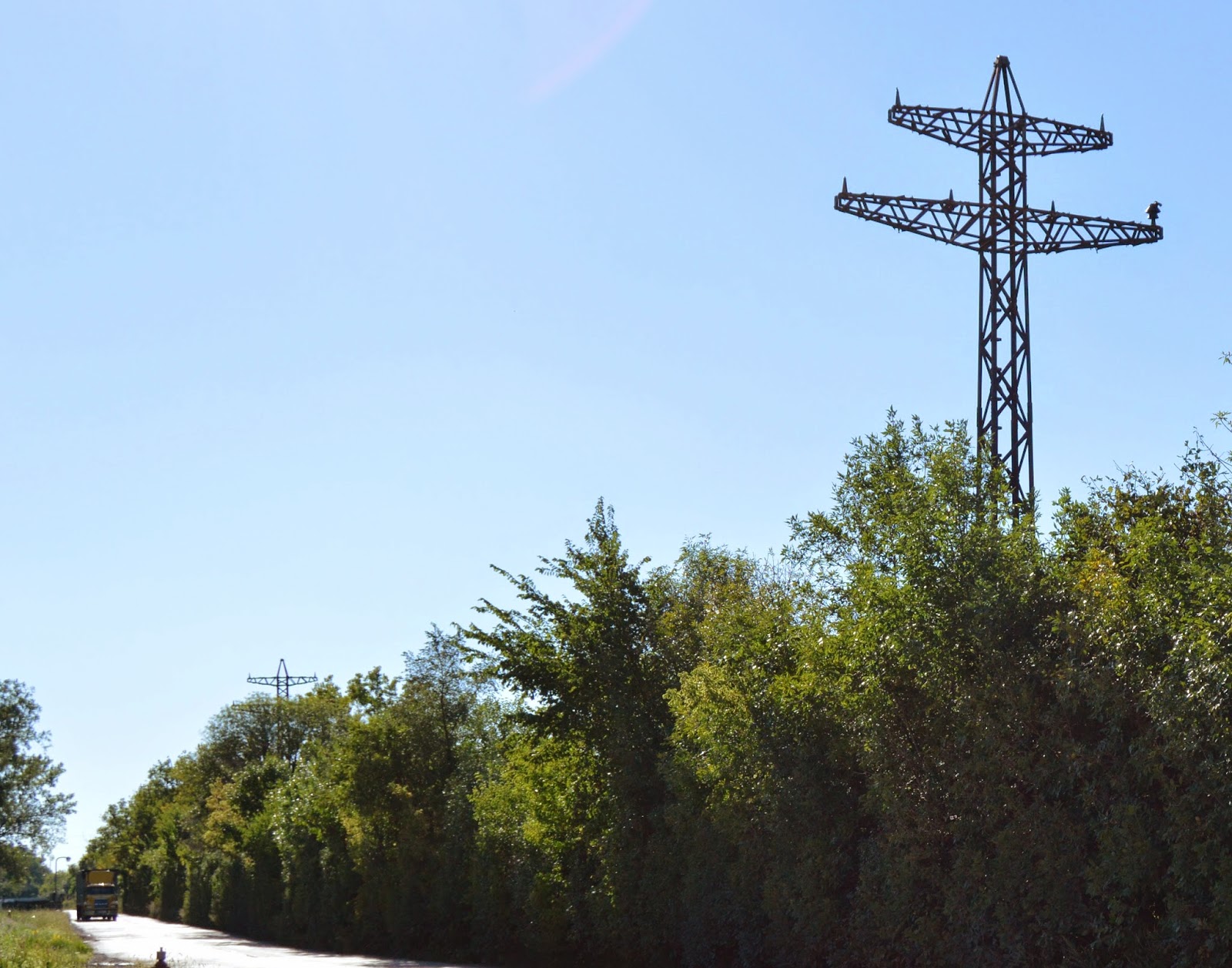 
Historical photo of the week: A brave man stands at the top of an electric cable pole near the Romeo Road Bridge in Lockport on August 30, 1907. Power generated at the MWRD's Lockport Powerhouse was transferred through cables along the Chicago Sanitary and Ship Canal to a control station in Pilsen.

This confirms my theory that these towers were part of the CS&SC project.

And at the Chicago end, they had a switchyard enclosed in a building.
Another view of the power line and BNSF/Santa Fe 9C Bridge. 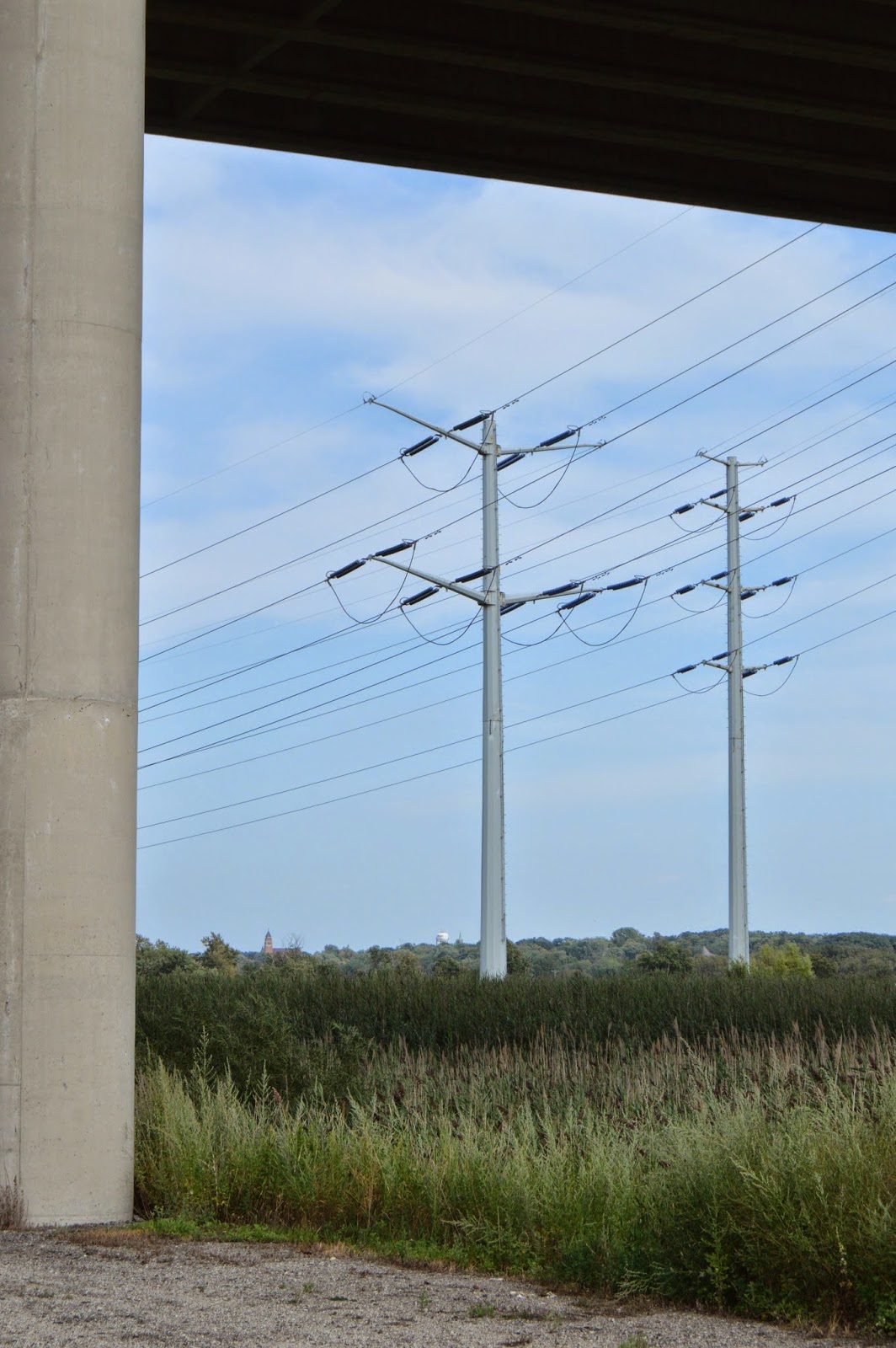 Some people can take pictures of bridges that are photographic art. I was experimenting with pictures of power line towers and piers. It looks like I better stick to taking pictures for documentation, not art. 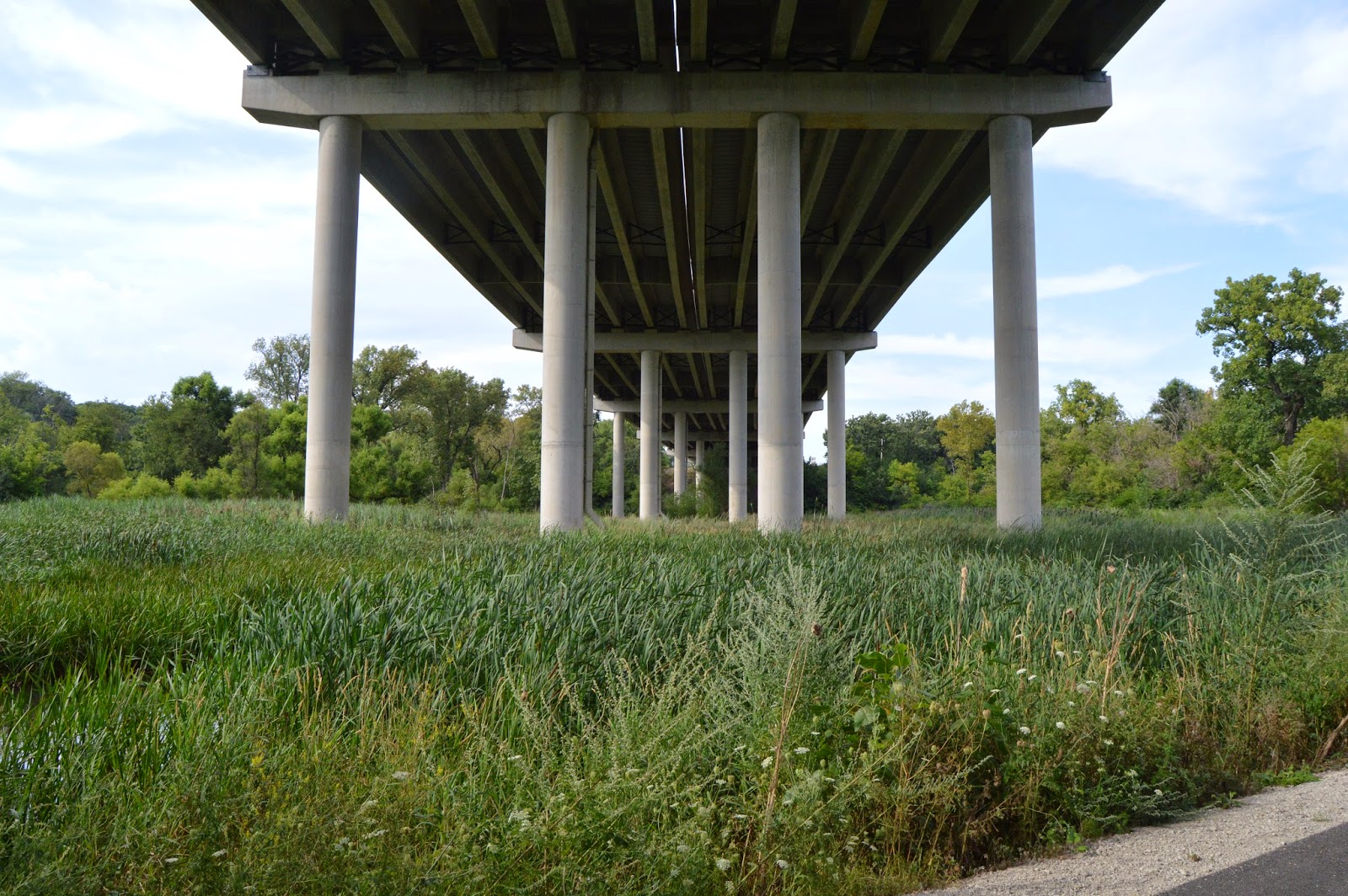 There is a race for the tallest towers in the Chicagoland area.

The tower Kevin caught was east of a pipe bridge. But the one below that is east of the canal is the only one that showed up properly. There are several of these towers over the EJ&E's lakefront route. Note that US Steel owned EJ&E so it makes sense that it built its power line over land it already owned.


David Daruszka posted four photos with the comment: "More photos from my Hoosier Hinterland Holiday. I'm a sucker for high voltage towers."
Dennis DeBruler You stopped more than once. I think the second pair is carrying a million volts. The use of four wires per circuit is used to help contain the electric field of that voltage. The industry seems to have stopped at a million volts.

Posted by Dennis DeBruler at 2:52 AM